I thought I would have some external reviews to link to, but I guess not, or at least not yet. So I'll get right to business: 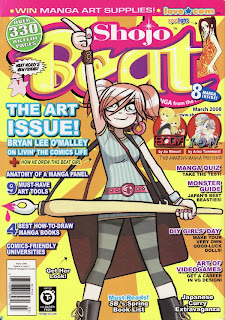 That's right, Bryan Lee O'Malley provides the awesome cover to this issue! Check out that kick-ass image! He's a pretty cool fellow, methinks. The interior sees him do a standard interview, and I learned from the introduction that he is "known to his fans as 'BLOM'". I guess I'm not much of a fan, because I had never heard that before. Is it actually true? The nickname I hear used most often is "Mal". Anyway, he also contributed a yonkoma-style four-panel strip, which I hope I won't get in trouble for reproducing here, for any non-subscriber fans of BLOM/Mal:

As you probably saw from the cover, this is "the art issue", which means there are a few pages discussing artistic tools and techniques, including an interesting comparison between a page of Japanese manga (with notes about artistic details like screentones and effects) and its English translation (with details about translating dialogue and sound effects). It's not really anything groundbreaking; if you've read anything about comics art production or translation, you'll be familiar with everything discussed. But it's a good start for any of the kids, who are, you know, the actual intended audience of this magazine.

We also get to hear the first mention of the new series to replace Absolute Boyfriend, Gaba Kawa. It's only five chapters long, and it's something about a trouble-causing demon girl. We'll see what that's like next month.

Okay, on to the manga! There are two previews this month, starting with:

This is only a short preview, excerpting less than a full chapter of this early work by Arina Tanemura, creator of Full Moon and Gentlemen's Alliance, and a popular creator that Viz has been promoting the hell out of (she was their special guest at last year's San Diego Comicon). Myself, I don't really like her style, since the ridiculously large, sparkly eyes she draws on all her characters creep me out. This one was earlier in her career though, and it seems like she hadn't quite reached her later heights of ocular dysmorphism, so it's not as offputting here. The story concerns a girl named Ion who recites the letters of her name as a sort of good luck charm, which usually works. Apparently, she's going to find out from the leader of her school's occult club that she has psychic powers or something, but we don't actually get that far in this preview. Instead, the focus is on the annoying student council president, who is determined to make her his girlfriend, prompting her to flee whenever he draws near. Eh, it's cute and everything, but not something I would read. But I did want to comment on the costume design. It seems like manga creators (especially in shojo) like to design neat uniforms for their fictional schools (see Vampire Knight, or Tanemura's own Gentlemen's Alliance), and this one is no exception. Tanemura's design of a sort of belly shirt over a dress (or pants) looks cute enough on girls, but absolutely ridiculous on the boys. And the class president's "long hair tied back with a bow" look doesn't help matters:

I don't know, I just found that hilarious. That's all.

This preview is a full chapter about a girl who likes a boy in her class because he seems quiet and studious. But then she finds out he works for a host club, and is scandalized. And that's about all there is to it, at least in this first chapter. It doesn't seem like a premise that would lead to much of a variety of stories, but maybe Mimori expands the cast a bit in later chapters or something. It seems cute enough, and the art is fairly appealing, if not especially memorable. So, yeah, I don't think I'll bother keeping up with it. Somebody let me know if it turns out to be great or something.

Here's the big event of this issue, the final chapter of one of the series that started running in the first issue of the magazine. And, as I had heard, it's a pretty awful, anticlimactic ending. The series was never great (it seemed like Watase lost interest somewhere around the "Night gets turned into a tiny version of himself" storyline), but it deserved a better sendoff than this. What happens is [SPOILERS, even though I've pretty much made clear that I don't think the series is really worth reading. But if you can't bear to find out what happens until you read the final collection, skip to the next review], after Soshi moved away last chapter and left Riiko and Night to live happily ever after, Night burns out his circuits and "dies" (although Watase does leave open the possibility of a sequel, so he could come back someday). But it's not like he gets to profess his love to Riiko as she holds him in her arms and he breathes his last breath (fires his last electron?); instead, it happens off-panel, and Riiko comes home to discover his body being taken away. Maybe Watase was depressed or something. "You thought you were going to get a happy ending?!? Suckers!!! There's no such thing as 'happily ever after'! Love dies for no reason, and you will never find true happiness! Bwa ha ha ha ha!!!" So, yeah, it's a crappy ending to a pretty sub-mediocre series. I will say that there is one bit that is kind of affecting; when Riiko discovers that Night is "dead", she desperately and frantically tries kissing him to wake him up, like she did way back at the beginning of the series. Watase doesn't back down on that point; she portrays the loss as a devastatingly sad scene: 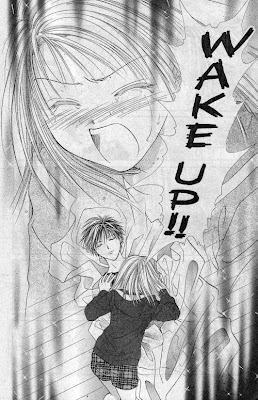 So it's not like she just has Riiko move on with her life like she had lost a toy or something. I'll give her that point; she's a good enough creator that she managed to wring a slight bit of real emotion out of a terrible anticlimax. But only a little. Now I'm going to have to try to read Fushigi Yugi or something, and try to forget about this little misstep.

Ah, now we're finally getting to the good stuff (along with the promise of a return to the series' regular plot). This chapter sees Nobara's adopted volleyball team, the Eagles, challenged to a high-stakes game against the college team that her mentor Ryo supposedly plays for, but was kicked off because...you know what? I'm not going to go into a long explanation. It's all soap operatics and whatnot, so I'm sure you get the idea if you haven't been reading the series, and if you have been reading, you know what I'm going to say anyway. So I'll just say that I'm looking forward to the next chapter, which will hopefully be full of good volleyball action, which I've always thought was the best part of the series. And it'll be extra dramatic for all involved, with Nobara needing to prove herself, Ryo needing to obtain a prominent place on the college team in hopes of an international career, and other characters all invested in the outcome in some form or another. Plus, Nobara's not-quite-boyfriend Yushin shows up, so there will be that added drama. Good times, I hope, and even if it's disappointing, they've stated that Nobara will be returning to Tokyo after the game, so we can all get on with the normal drama of her high school team.

So this chapter is mostly setup for that upcoming game, with a nice flashback involving Ryo's high school days and his relationship with a girl that wasn't as dazzled by his talent as everyone else was. 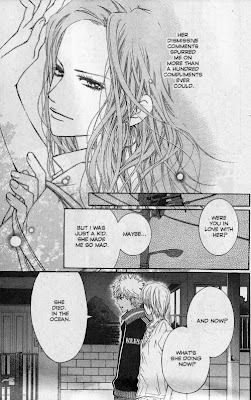 Since she died tragically, he'll get to prove his worthiness to her and earn her love from beyond the grave. Ah, the stuff of teenage romance. Anyway, it's a decent chapter, but I'm excited for some hot court action next month. Don't let me down, Takanashi!

After the big "Zero confronts his evil vampire creator" storyline that recently concluded, we get some hints as to possible future storylines, as Zero gets framed for her death (which Kaname actually committed...and I'm probably trying to explain the plot too much again). But the real highlight of the chapter for me was this scene, in which Yuki tries to convince Zero to drink her blood: 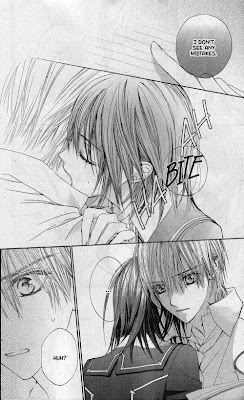 We need more comedy like that; this series is too serious for its own good. Other than that scene, there's not much of note going on here. Maybe something will happen next month (but probably not).

This series continues its excellent mix of humor and character-based drama, as we see the gang scramble to finish their final projects by the end of the school year. Morita's project is especially funny: 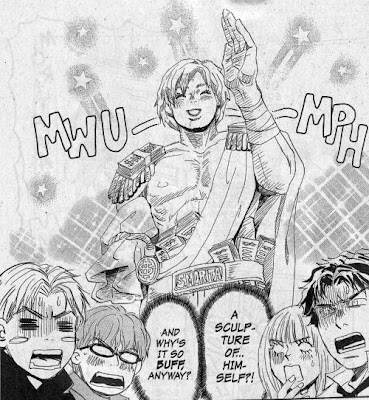 But will he finish it on time and be able to graduate? Here's a hint: he's already been in college for seven years, and doesn't seem too keen on leaving. We also get some of the series' now-trademark drunkenness and violence, and a nice moment between Mayama and Ayumi. And that's just in this month's first chapter (each issue contains two chapters of the series).

In the second chapter, Professor Hanamoto gets the opportunity to travel to Mongolia with a colleague to do some research for a book, and he asks if Hagu would like to go with him. This leads to an excellent, affecting flashback about how Hanamoto convinced Hagu to come and attend the college, leaving the home she shared with her elderly grandmother. He decides to ask her after he discovers her artwork and can tell that she is trapped by her circumstances: 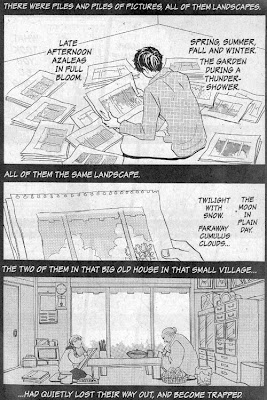 It's a quick, simple scene, but it's lovely, conveying Hagu's artistic drive and Hanamoto's protectiveness and encouragement. It's the kind of thing Umino does so well, building her characters through quiet, personal moments in between the loud, wacky antics.

The chapter closes out with a bit in which the whole gang ends up helping Hagu search for a four-leaf clover to give Hanamoto as a going-away present: 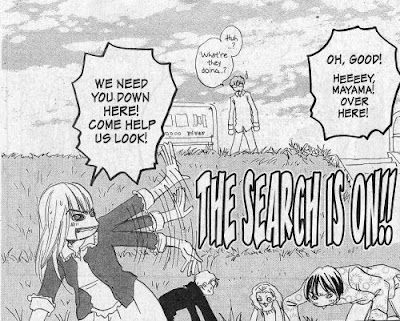 Good times. I can't wait to read more next month.

This month, we get to see Ann and Daigo's reunion, as he comes to visit her in Tokyo for her birthday. So there are a bunch of cute scenes of them going on a date, and some teenage awkwardness that seems pretty realistic: 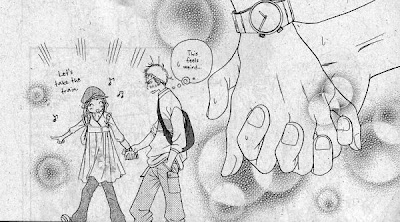 We also see Fuji's meeting with the man who might be his father, and it's pretty disappointing (for him). The guy doesn't seem very accepting or even interested in him, and Fuji is obviously left reeling, although he does his best not to let it show. Then he meets up with Ann (after Daigo has left for home) and does something rash (buy the series to find out what. Mwa ha ha ha!). It's a nice portrait of a reserved teenager struggling with emotion and trying to keep it all on the inside.

So it's another fairly quiet chapter in this notoriously bumpy series. I'm expecting some highly emotional drama to come crashing in and upset everything really soon. Or maybe Ashihara has gotten the big tragedy out of the way and is settling down to tell a story of teenage romance. We'll see what she has in store; I expect it will be good reading.
-----

So that's it for this month. Ah, I do love my Shojo Beat! And isn't everybody proud of me actually doing some regular posting? I hope I didn't speak too soon. More tomorrow, if all goes well, and I'll probably look at the solicitations that are coming out this week. And I'm thinking of doing a sort of "special event" soon, so watch this space!
Posted by Unknown at 8:24 PM