Finder: Voice: You find yours, I'll find mine 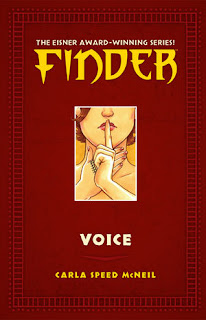 For such a complex, long-running series, Carla Speed McNeill's Finder is surprisingly open to new readers, easing them into the weird sci-fi society of the domed city of Anvard and getting them acquainted with the characters without seeming like they've missed too much to understand what is going on. In fact, this late volume might be the ideal entry point, which is a pretty remarkable accomplishment, and probably even more so in that while McNeill's includes plenty of explanatory endnotes that point out details in the art, relationships among characters, and descriptions of the intricacies of the world, none of them are necessary for understanding or enjoyment of the story itself; in fact, they are best experienced as a bonus to read through after the book itself is finished, a sort of behind-the-scenes DVD extra that isn't essential, but is full of neat, interesting information.

It's a testament to the richness of McNeill's world that it seems so full of activity, detail (both futuristic and street-level-grimy), and, well, life, that the things going on in the backgrounds and corners of the panels could be spun off into their own compelling stories. However, here she focuses on Rachel Grosvenor, who, as the story begins, is competing in a sort of beauty contest to be granted membership in her clan, the Llaveracs, one of several tightly-knit (both genetically and socially) groups that form the ruling class of society in this world. She ends up losing something important, leading her to embark on a quest throughout the levels of both the city and civilization which are well below what she is used to experiencing, as she tries to find one Jaeger Ayers, who turns out to be the regular lead of the series but is surprisingly absent here. His presence still looms large over the story, but this particular Finder tale is more about Rachel and her continuing maturity, which makes for a fascinating journey through McNeill's fully-formed ecosystem, seeing her navigate threats that are physical, social, and even mental, with the result being that she "finds herself" rather than the object she thinks she is seeking.

This is all very satisfying stuff from a world-building and storytelling level, but what's really stunning here is McNeill's artwork, which fleshes out the world beautifully through gorgeously detailed settings which are given rich depth and texture with her trademark dense cross-hatching, and character art that is some of the best in the business, fluid movement meeting solidly physical violence, expressive faces convincingly demonstrating exactly what information needs to be conveyed to the reader. Rachel, especially, is a marvel of emotion and nuance, from the way McNeill captures her brushing her hair behind her ear: 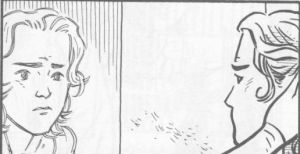 To the way she converses on her futuristic brain-implant cell phone by making a familiar phone gesture: 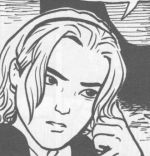 To the wide variety of expressions that make their way across her face (and also her body, with posture telling as much as facial expression, along with hair that ranges from meticulously coiffed to unkempt and unruly) as she ends up in a bevy of unfamiliar situations: 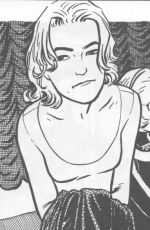 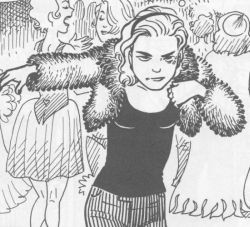 And finally, as she ends up at the end of her rope and just lets her emotions out in a powerfully expressive scene: 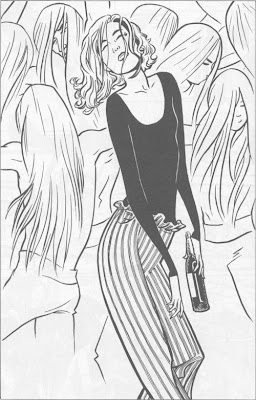 It's some pretty amazing work, and McNeill is at the top of her game here, throwing in some Jaime Hernandez exaggerated reactions and Dave Sim expressive lettering, while making this comic steadfastly her own, a fully-formed vision of a speculative society and characters that seem as real and three-dimensional as somebody you meet walking down the street. While it builds on years of previous stories, this is a wonderfuly deep stand-alone work, and one that will certainly prompt readers to seek out any- and everything else she has done. They won't be disappointed.
Posted by Unknown at 9:44 PM