Little Nothings: I think they're somethings

Link: I forget who, but somebody pointed out the cartoonist Seamus Heffernan to me, specifically the excerpt from his soon-to-be-released Xeric-funded comic Freedom, which is excellent, and has me really wanting to read the whole thing. It's historical fiction, set prior (and maybe eventually during?) the American Revolution, and just the few pages previewed there demonstrate a real facility with storytelling. This guy is someone to watch.


Little Nothings, volume 4: My Shadow in the Distance
By Lewis Trondheim
Published by NBM 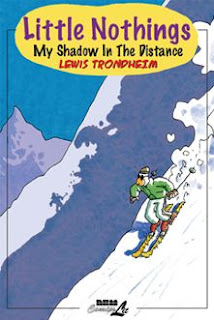 Lewis Trondheim is a pretty great cartoonist, and his ongoing series of journal comics is a wonderful demonstration of his skills. He manages to capture interesting, humorous moments from his life and travels and lay them out in panel form such that the essential comment, conversation, observation, or experience is perfectly communicated. Considering that most of the experiences being related here involve world travels, pretty much every page here is interesting and enjoyable, with Trondheim covering a wide variety of experiences, from travel and sightseeing to conversations and human observations. It's wonderfully done, just from a writing perspective, with the cartoonist's humor and particularly French viewpoint on life shining through even in translation. 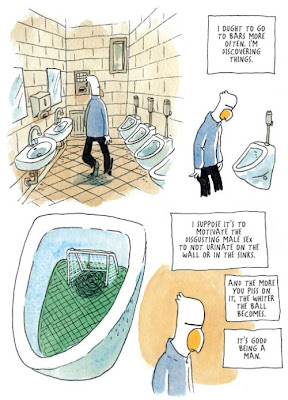 And then there's the art, which is as much of a draw as the stories being told, if not more so. Trondheim starts from a goofy position, depicting himself as a sort of bird-man, and everyone else as some sort of animal-person, which is a delightfully odd conceit, but works quite well in terms of reader identification. Once you accept that Trondheim's version of reality is populated by strange animal-human hybrids, it's fun to see what sort of creature will pop up next, and they all seem to fit together as normal people, found wherever one travels. 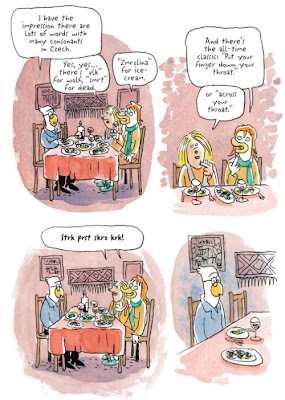 And since those travels take Trondheim all over the world (he visits Utah, Las Vegas, San Francisco, Argentina, Angouleme, Germany, and the African island of Mayotte in this volume), he gets plenty of opportunities to draw the sights, which end up being beautiful representations of reality, grounding the goofy anthropomorphism in the real world and, along with the relatable details (that is, irritations) of travel, emphasizing Trondheim's feet-on-the-ground experiences. Trying to go off-roading in a rental car in a Monument Valley desert, viewing the Atlantic and Pacific oceans simultaneously from Tierra del Fuego, and remarking on the way Prague transcends its tacky touristy-ness from eight feet up are just a couple of the many moments that are wonderfully captured here.

And yes, the art which delineates all of this on the page is gorgeous stuff, fluid linework that manages to wring all manner of expression out of animal eyes, beaks, and snouts, and especially the absolutely beautiful watercolors that give such depth and texture to everything, especially the breathtaking skies: 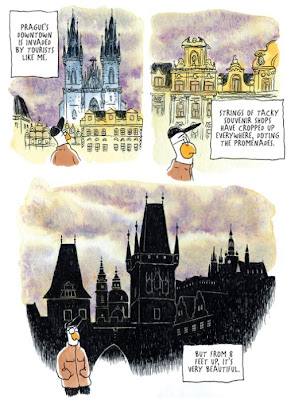 The coloring also works excellently to separate Trondheim's borderless panels from each other and make them stand out on the page, as well as to emphasize his own individual character within those panels. There's an interesting recurring motif in which the colors encircle Trondheim, yet drop out in the center, leaving the area around him uncolored to emphasize a particular moment, or perhaps to isolate him against other people: 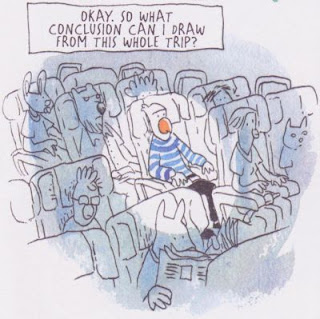 And I love the way the colors often fill a panel boldly, centering attention on the important details in the middle, but fade at the edges, seemingly depicting the fuzzy periphery of Trondheim's memories: 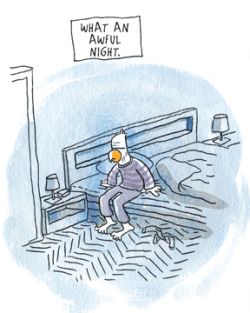 It's a beautiful-looking book, and while it's not exactly groundbreaking or "important" in what it captures, it's a wonderful example of the autobio/journal comic, capturing interesting, funny moments in the life of somebody who is so good at relating that sort of scene, whether real or fictional. After four volumes, one supposes Trondheim could keep doing this in perpetuity, and if he does, the comics will almost certainly be worth reading.

More examples from the book can be found at NBM's blog.
Posted by Unknown at 7:00 PM