Nursery Rhyme Comics: It's what it says on the tin 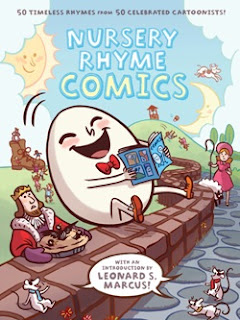 As one would expect, this is pretty much a collection of straight comics versions of well-known nursery rhymes (and a few obscure ones), so rather than trying to make any sweeping statements covering such a diverse mix of talent, here is one sentence (or sentence fragment) for each entry:
"Hey, Diddle Diddle", by Nick Abadzis: This is mostly a straight illustration job, rather than any sort of attempt to wrap a story around the nonsensical words, but it handles the depictions of stuff like a jumping cow and a dog having a fit of laughter quite well; nothing mind-blowing, but still pretty pleasant.

"Hot Cross Buns", by Andrew Arnold: A simple one-pager, with a bit of a surprise at the end regarding a narrating pigeon.
"The Grand Old Duke of York", by Kate Beaton: This fits Beaton's usual historical milieu, with the crazy duke riding on his men's shoulders and ordering them about; it's pretty funny.
"There Was a Little Girl", by Vera Brosgol: Brosgol's little girl is cute and believable, whether she's good or horrid.
"Three Little Kittens", by Nick Bruel: This one is pretty literal, but it's funny to see the kittens' pie-covered mittens at the end.
"Pop Goes the Weasel", by Scott Campbell: Campbell amusingly highlights the goofy randomness of this rhyme by treating the weasel as a chaos-causing agent, suddenly scattering the subjects of each of the various verses whenever it's time for his preferred action. 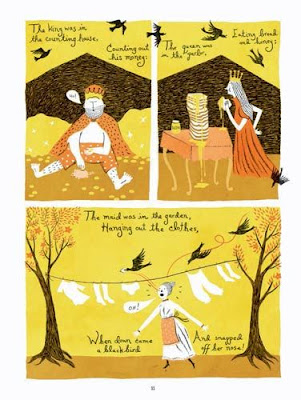 "Sing a Song of Sixpence", by Lilli Carre: This one is kind of surreal, with elongated characters and a stolen nose, and also an amusingly high stack of toast slices.
"There Was a Crooked Man", by Roz Chast: Chast turns in one of the more crooked men (along with mile, sixpence, stile, cat, mouse, and house) that I've ever seen, but he sure doesn't seem to mind.
"Old King Cole", by JP Coovert: This king is a lion heading up a band consisting of a hippo, a monkey, and a giraffe, which is pretty great, a rockin' jungle dance scene.
"Old Mother Hubbard", by Jordan Crane: There are a lot more verses in this version of the poem than I was aware of, but Crane makes them really fun, turning the dog into a pretty great cartoon visual.
"If All the Seas Were One Sea", by Rebecca Dart: This is one of the more impressive illustration jobs in the book, a beautifully-colored depiction of a giant man standing atop a planet, an enjoyably exaggerated literalization of the poem.
"The Queen of Hearts", by Eleanor Davis: There's lots of extra detail and word balloon dialogue in this one, turning the story into a tale of a people's hero striking at the crown, all in a neat, Nancy-ish style.
"Cindereller", by Vanessa Davis: I always thought this was just "Cinderella, dressed in yella'", but pronunciation aside, Davis illustrates it quite ably, even the snake-kissing.
"As I Was Going to St. Ives", by Theo Ellsworth: While there was really only one guy going to St. Ives, the opportunity for Ellsworth to illustrate a lively explosion of sacks, cats, and kittens is not to be missed.
"Girls and Boys, Come Out to Play", by Jules Feiffer: Old-school marker art of a bunch of kids playing, nicely laid out to act out the words of the poem across a double page spread.
"Little Boy Blue", by Bob Flynn: A cutely cartoony enactment of the poem, although the antics the animals get up to while Boy Blue is sleeping are pretty funny. 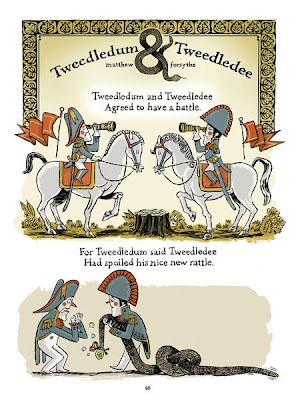 "Tweedledum and Tweedledee", by Matt Forsythe: I like this depiction of the titular pair, with them seeming more like Napoleonic generals than rotund overgrown children, and the resolution to their "battle" is nicely understated.
"The North Wind Doth Blow", by Alexis Frederick-Frost: Pretty standard stuff here, with a robin being seeking shelter from the wind, and that's about it.
"Pussycat, Pussycat, Where Have You Been?", by Ben Hatke: A fun interpretation of this poem as a conversation between two nicely-realized cats, one of whom is revealed to be a definite boaster.
"Humpty Dumpty", by Gilbert Hernandez: I like the surreality of this one, with its standalone pink wall and hobby horses, plus there's kind of a twist ending, of a less gruesome sort than this poem usually leads to. 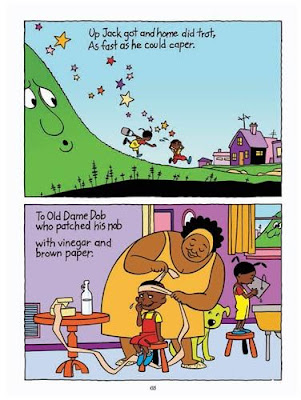 "Jack and Jill", by Jaime Hernandez: Jaime's ultra-cartoony style is always nice, and I love his depiction of the large lady who patches up the kid's head.
"There Was an Old Woman Who Lived in a Shoe", by Lucy Knisley: While the interpretation of "whipped them all soundly" is a bit of a stretch, reimagining this one as a story about a rock-and-roll day care is pretty fun.
"London Bridge is Falling Down", by David Macaulay: Lots more verses than are usually recited here, depicted in tall, narrow panels, each showing London Bridge either collapsing or being rebuilt with various materials; kinda weird.
"Little Miss Muffet", by Mark Martin: Pretty basic, although depicting the spider as a sort of shabby lothario is pretty funny, as is Miss Muffet's last-panel freakout.
"The Donkey", by Patrick McDonnell: If you're going to have somebody draw a donkey playing a saxophone, Patrick McDonnell is your man. 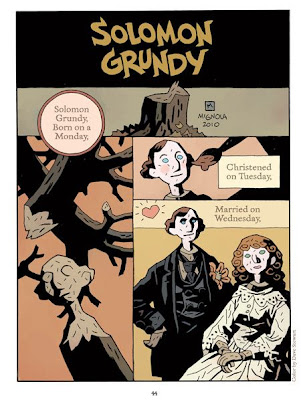 "Solomon Grundy", by Mike Mignola: This is exactly the rhyme you would expect Mignola to illustrate, and he makes it creepy and ominous, turning the character into a Pinocchio-like figure and suggesting much in between the panels. 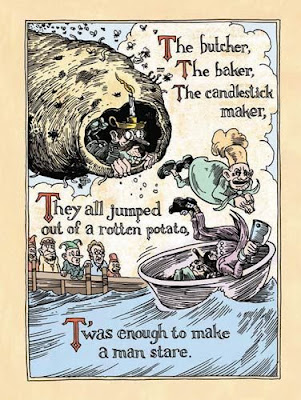 "Rub-a-Dub-Dub", by Tony Millionaire: While there's not a lot to work with in this short poem, Tony Millionaire manages to make it extra weird and lively.
"Rock-a-Bye Baby", by Tao Nyeu: While the illustration style is simple (and neon-shaded), the depiction of the not-exactly-helpless baby here is pretty great.
"For Want of a Nail", by George O’Connor: Pretty simple and literal, but the gradual zoom out from the initial panel depicting a nail is nice.
"Hush, Little Baby", by Mo Oh: This might be the highlight of the entire book, turning the poem/song into a call-and-response between a father and his young, less-than-impressed daughter, with panels snaking organically across the pages, the adorable characters interacting with the objects of their summoned imagination wonderfully.
"Peter, Peter, Pumpkin Eater", by Eric Orchard: Maybe it's just familiarity, but the first verse of this poem seems to work better than the second one (or maybe it's just distaste at the idea of Peter Peter Pumpkin Eater having two wives), and Orchard's goofy pumpkin on wheels would have been a preferable image to end on, if you ask me.
"'Croak', Said the Toad", by Laura Park: I like Park's versions of the toad's (and his frog acquaintance's) meals, fancily prepared dishes made out of slugs and worms. 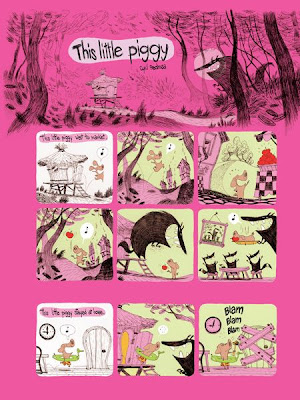 "This Little Piggy", by Cyril Pedrosa: Pedrosa turns this one into a series of strips about the travails of a wolf family and the multiple pigs they prey upon, all depicted in a gorgeously drawn forest with a funny twist of an ending.
Lark Pien: I hadn't heard this one before, and it really doesn't make any sense, but I do like Pien's cute artwork, with its anthropomorphic nuts, comely maiden, and bizarre ending.
"The Lion and the Unicorn", by Aaron Renier: This poem makes little sense, but Renier's fairly literal illustration of it is lush, lively, and beautifully colored.
"One, Two, Buckle My Shoe", by Dave Roman: Roman turns this simple collection of words into a story about a mad scientist and his numbered clones, making for a cute, hilarious romp.
"Yon Yonson", by Marc Rosenthal: This is apparently one of those never-ending rhymes, which Rosenthal turns into a crazed attack on an innocent pedestrian by the title character.
"Hector Protector", by Stan Sakai: I don't know this poem at all, but I like the way Sakai fleshes it out through word balloons filled with sequential imagery, a sort of neat, multi-level story.
"Three Blind Mice", by Richard Sala: Pretty simple and literal, but Sala makes it work with minimalistic flair.
"Wee Willie Winkie", by Mark Siegel: A great book-closing strip, turning the title character into a sort of Sandman who coats children in golden slumber-stuff.
"Jack Be Nimble", by James Sturm: A hilarious indictment of the reader by the title character, who can't believe anyone would encourage him to do something so dangerous (again).
"Georgie Porgie", by Raina Telgemeier: As cute as you would expect, but setting the action at a modern birthday party and making Georgie upset girls by kissing them and getting their faces messy, then run away while being pelted with food by the other boys doesn't make for the most satisfying plot, not that it really matters.
"The Owl and the Pussycat", by Craig Thompson: This one is gorgeous, with pages full of densely-detailed, beautifully-colored imagery, and it's tons of fun to read out loud too. 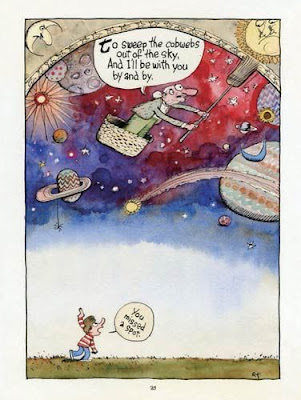 "There Was an Old Woman Tossed Up in a Basket", by Richard Thompson: As good as one would expect from Thompson, with a silly contraption to fire a lady up in the air on the first page, leading to beautiful watercolors as she sweeps the night sky clean on the second.
"Mary Had a Little Lamb", by Sara Varon: Varon's art isn't terrible or anything, but it's somewhat less appealing than most of what's in the book, just rabbit-people acting out the basic story. 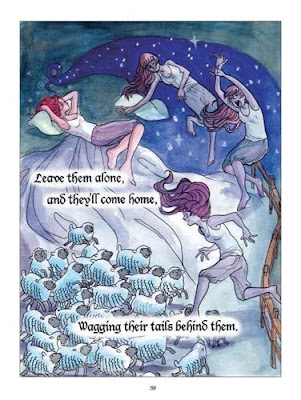 "Little Bo Peep", by Jen Wang: Another contender for best art in the book, two beautifully composed and colored pages that interpret the poem as a young woman trying to fall asleep, and then entering a lovely, sheepy dreamscape.
"Baa-Baa, Black Sheep", by Drew Weing: A nicely cartoony take on the poem that turns it into a cute story about a sheep finding a friend.
"The Itsy Bitsy Spider", by Gahan Wilson: Old-school quirkiness, with the spider trying to drag several pieces of luggage up the waterspout.
"Pat-a-Cake", by Gene Luen Yang: A fun sci-fi version of the poem starring an alien family, because why not?


"Hickory Dickory Dock", by Stephanie Yue: A cute mouse runs up a clock tower and rings the bell, which, given the lack of material to work with, works pretty well.
Now, adult analysis and appreciation is all well and good, but nursery rhymes are directed toward children first and foremost. How well does the volume work for its target audience? Well, a photo says more than any number of words can: 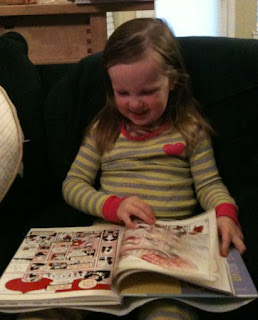 Nursery Rhyme Comics comes out on October 11, 2011 from First Second.
Posted by Unknown at 9:43 PM