After last year's obnoxiously celebrity-focused Wizard convention, I swore off future Wizard conventions in Chicago, but the surprisingly strong guest list (on the comics end; while some might flip for things like a cast reunion of the children from Willy Wonka and the Chocolate Factory, I am not one of them) for this year's event proved that I am nothing if not weak-willed. It actually seemed like some of my suggestions were taken to heart, like expanded panels (most of which were celebrity/TV/movie focused, but the fact that more of them existed was notable) and increased attendance from Chicago-area creators. Maybe it was just a coincidence, but the con seemed like it was moving ever so slightly back toward the kind of convention I would like to attend.

The event itself was actually pretty enjoyable, if only due to modest expectations. The celebrity areas did not seem as crowded with photo-seekers as they had in the past, and the random booths with the tenuous connections to nerd culture seemed more appropriate. Purveyors of swords, t-shirts, Japanese snack foods, bootleg DVDs, and weird contact lenses still proliferated, but they seemed less a major force and just another place to spend money alongside the many comics retailers.

Artist alley, my haunt of choice for most cons, was packed, both with artists and con-goers, and while the ratio of good work to crap was still fairly low (so many pin-ups, so few comics, so many fucking zombies), there were a lot of artists in attendance that I was excited to talk to, like Laura Park, Lilli Carre, Nina Matsumoto, Jeffrey Brown, Mike Norton, Chris Burnham, Pia Guerra, Christopher Mitten, Eduardo Risso, Ryan Browne, Spike Trotman, and many more, not to mention a good number of promising up-and-comers. That aspect alone is the real reason I go to conventions, and dumber pleasures like seeing people dressed up in weird costumes is just a bonus.

Of course, there are also some other interesting things to see that you're not going to see anywhere else, like a Lego club that had set up a display that was something like thirty feet long and amazingly detailed, consisting of scenes recreated from such disparate properties as Raiders of the Lost Ark, Futurama, and Arrested Development: 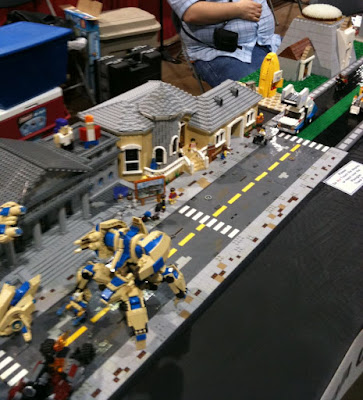 Or a display of what a sign claimed were "the rarest comics in the world", ashcan editions of Action Comics, Superman Comics, Superboy, Supergirl, and Superwoman, which were originally produced before the comics themselves came out to secure trademarks, featuring cover and interior art from previously-published comics. 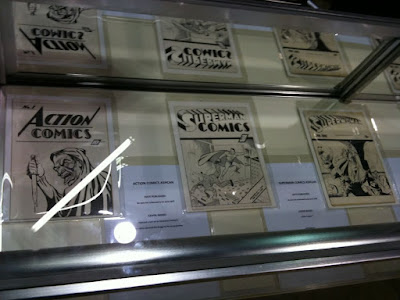 All in all, it was definitely not a wasted day. There was much to see, purchase, and interact with, and as much as I may get annoyed by aspects of it, it's still fascinating to see such a huge swath of nerd culture all crammed into one location. Will I bother with it next year? That remains to be seen...
Posted by Unknown at 10:05 PM