Kinky & Cosy: Not as descriptive a title as I was hoping 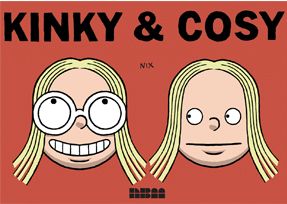 There's a pretty great tradition of European comics in all manner of genres and formats, and North America is pretty sorely lacking in what we get to experience of that output. However, as welcome as any new translated European release is, sometimes one wonders if there might have been something a bit better to import instead. While this comic strip collection from Belgian cartoonist Nix is nicely-designed (dig those googly eyes peeking out through holes in the cover!) and does have its charms, it's not exactly an example of sterling wit and brilliant cartooning that was begging to be unleashed on American shores. Instead, it's a pretty standard "evil kid" type of comic, following the title characters as they cause trouble at home, in class, and in various other social situations (cheating off each other's tests, that old gag where they sit on each other's shoulders and wear a long coat to sneak into a nightclub, that sort of thing), rarely moving beyond of expected behavior or doing anything outrageous enough to offend. It's mildly amusing stuff, mostly contained within three-panel strips, staying within recurring situations and variations on punchlines. The occasional bits that break out of this structure are the most interesting parts: photocomics starring the cartoonist and his pals dressed up as the characters, an extended storyline involving the girls' mother falling in love with the neighborhood recycling bin, a series of puzzle pages at the end of the volume. Of course, there are also a series of Dilbert-esque strips in which the mother complains about not being able to work her office computer, so not every deviation from the norm is successful. The art isn't anything to write home about either; solid black outlines around fairly crude characters, blank backgrounds, mild grotesquerie without anything especially disturbing. It's kind of mediocre, but it is at least a decent example of the rhythms of Franco-Belgian humor, different enough from what is usually published on this side of the Atlantic to be somewhat notable. It would be nice if it was funnier, better drawn, more offensive, etc. though.

For more examples of individual strips, check out NBM's blog.
Posted by Unknown at 7:00 PM