The Lives of Sacco and Vanzetti: I wouldn't give their troubles to a monkey on a rock

A Treasury of XXth Century Murder: The Lives of Sacco and Vanzetti
By Rick Geary 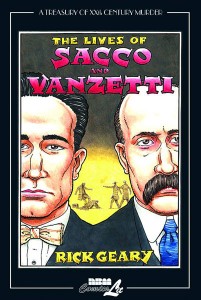 Rick Geary's "Treasury of Victorian/XXth Century Murder" books never fail to be fascinating and educational, presenting meticulously researched information about violent incidents from the past, both famous and lesser-known, then exploring the surrounding circumstances engagingly and enjoyably, making for an quick, yet comprehensive, history lesson for those of us who want a taste of old-school salaciousness. There's something about Geary's grim, quiet presentation that brings the events to life without being sensationalistic, yet also seems kind of alien, with odd-looking people acting out terrible scenes that seem as foreign to us due to their inhumanity as their period garb and setting. 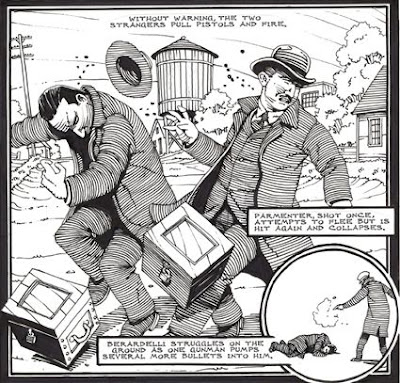 This particular case is especially interesting since it was notorious on a worldwide scale, yet seems to be little more than a footnote in the present day. A payroll robbery and double murder led two anarchist-affiliated Italian immigrants to be arrested and charged, even though their guilt seemed pretty unlikely at best, with the subsequent guilty verdict being a result of anti-immigrant prejudice at its worst. Seeing the events play out, marching unrelentingly toward what was almost certainly a wrongful execution, is kind of banally horrific, a miscarriage of justice that would seem unthinkable in modern times, if we didn't have plenty of examples of exactly that sort of awfulness filling the news daily (those will have to wait a while for Geary to get to them).

Whether one can draw a direct line from past horrors to the present is arguable, but Geary isn't interested in making any sort of social or political statement; he's just laying out the facts, and he does as remarkable a job of it as always, filling pages with maps, diagrams, informational text, timelines, and recreated images of the various people involved, pacing it in a perfectly steady flow of information that makes the reader feel like they understand the ins and outs of what happened, even if it must be a simplified version of a complicated tragedy, one that was confused by poor memories, lies, rumors, protests, and myriad other factors.

It's also wonderfully illustrated, although there's not much here that one wouldn't expect after reading most anything else by Geary. The texture given by closely-spaced parallel lines, the blank faces, the frozen moments; it's as excellent as always. I particularly like the emphasis on details provided during the trial, like an inset magnifying a bullet being held by the coroner: 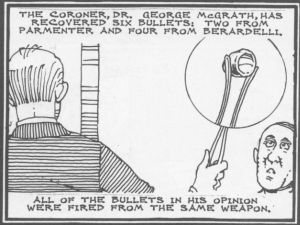 And the goofy details that show up here and there make me smile; it seems like Geary is slipping a bit of humor into such a steadfastly dry relation of events with panels like the second one below: 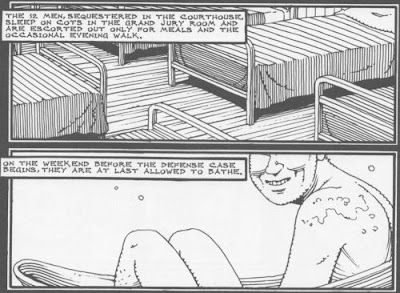 Whether you're interested in the details of history or just like to see good comics storytelling, this is a really good book, one that educates and fascinates, and kind of outrages, even when the events depicted are nearly a century old. That would be a remarkable accomplishment on its own, but when it's just one example among many, you know you're in the presence of great talent.
Posted by Unknown at 7:00 PM