Yes, comics were acquired at the recent comic convention, and here are some words about them: 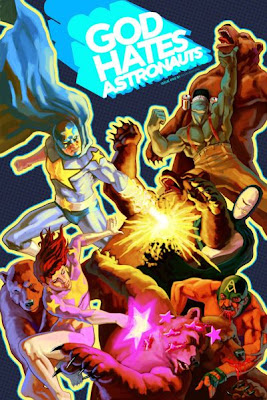 The superhero genre has pretty much become a dead end, an endlessly recycling series of convoluted plots and ridiculous conflicts, with even the "innovative" or "satirical" seeming tired and played out by this point. If there's anything left, it's full-on absurdity, and that's what Ryan Browne is doing with this webcomics-turned-print series, to hilarious effect, making his characters profane, moronic, squabbling, violent doofuses with stupid powers and ugly costumes, fighting over petty things and doing nothing much of any worth or positivity. It's laugh-out-loud funny, full of silly gags, jokey sound effects (a personal favorite is "Fucked!"), and nonsensical details that are funnier for their lack of emphasis, like Dr. Professor, the moustache-sporting Rhino scientist. The escalating nastiness that happens to the ostensible hero over these two issues is pretty horrifying, yet more imaginative, memorable, and gross than any number of Geoff Johns dismemberments, while still being gut-bustingly funny. This is great comics, full of personality, silliness, and really nice art. Get in on this party now before Browne gets gobbled up by the corporate comics machine.

God Hates Astronauts can be read online, but I recommend purchasing the print editions, which are really nicely done. Also recommended: Blast Furnace, Browne's other ongoing webcomic, which is written off the top of his head, with new pages appearing daily, planned to continue for a full year.
----- 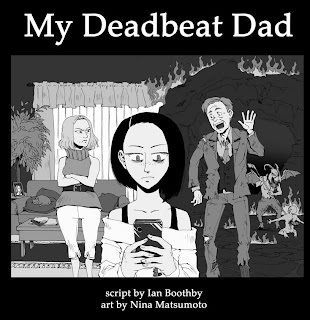 This handmade minicomic introduces a compelling idea that may or may not ever receive a follow-up, but even in this small space, it does receive more than just a basic introduction, which is nice. The story follows a girl whose parents are divorced but whose dad signed a really binding custody agreement that still gives him visitation rights even though he is dead and in hell. That's a great idea, and writer Ian Boothby (of various Simpsons comics) could have just described it and stepped back, happy with a job well done, but he does come up with some nice ideas regarding the ramifications, including the reason why the version of hell seen here is kind of cartoonish rather than horrifying. Artist Nina Matsumoto (also of some Simpsons comics, but also her own series Yokaiden) turns in some nice art, especially the screen tone shading and a few bits of fast-moving action. If we're lucky, we'll see more of this story someday. Here's hoping.
-----

Do Not Disturb My Waking Dream #2
By Laura Park 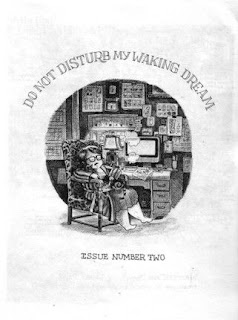 The autobio comic has long been the red-headed stepchild of the indie comics scene, easily-mocked as full of boring, self-centered, trite observations about the daily lives of artists as if they are interesting to anyone but the creators. Interestingly, this minicomic fits that description to the letter, but Laura Park is such a good artist that even the hastily-sketched depictions of unremarkable activities are fun to read, just to see how well she can make simple shapes and shading do so much to convey her emotions, insecurities, joys, and irritations. It's delightful stuff, sometimes seeming like stream of consciousness "this is what I did today" journaling and then skipping to well-realized strips capturing funny or memorable moments, then zooming out for more detailed images that demonstrate an excellent facility with cross-hatching. The simple minicomics format is perfect for this sort of thing; what might not fit well in a slick hardcover works wonderfully on simple white stapled paper, a wonderful little collection of moments from somebody's life, presented without any attempt at profundity or self-importance, just a record of stuff that seemed interesting enough to get down on paper, and is definitely worth a look, if only to examine how good Park is at dashing this stuff off and making it cute, enjoyable, and visually appealing. Any longer work from her would be welcome, but keeping it short, sweet, and simple has its appeal as well.
Posted by Unknown at 10:03 PM