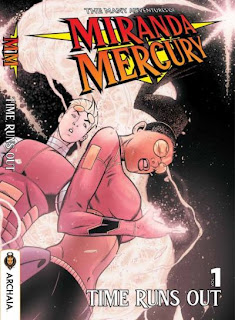 Several years ago, the first issue of what was intended to be a comics miniseries (or maybe even an ongoing series?) came out, and it was very promising, in its exciting action, fun sci-fi ideas, and enthusiasm for comics storytelling. One of the more interesting ideas was that it was labeled as the 295th issue of a long-running series, a quick way to establish a huge amount of backstory for its world and characters and lead up to a big 300th issue spectacular. Unfortunately, further issues never materialized, due to various personal and professional reasons (more information is available at mirandamercury.com, for the curious). Until now, that is, with the release of a hardcover "collection" of the entire miniseries, promisingly branded with a "volume 1" to indicate that more will be appearing in the future. 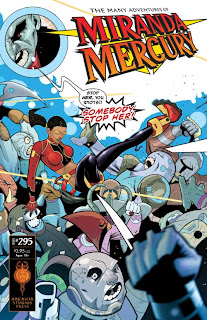 It's especially nice to see that while the initial issue was good, the creators have only gotten better in the intervening years, making the final book a well-written, slick, brightly-colored portion of the title character's life. She's a space-traveling adventurer, fighting for good in a future full of alien thieves, doomed planets, corrupt superhero law enforcement, time raiders, and psychotic villains. She's a strong female character in the best sense of the word, a smart, incredibly capable hero who always succeeds in her fight for good through sheer force of will. Aided by Jack Warning, her teen-genius sidekick who seems to be as amazing as she is, their adventures are pretty fantastic, with them constantly shooting rayguns, flying around on hover-bikes and pterodactyls, operating sci-fi machinery, fighting monsters, and just plain being awesome. 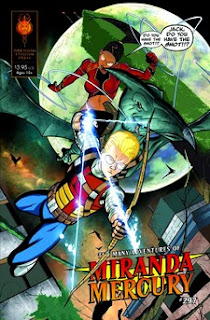 While the external threats seem to get most of the focus, there's an internal conflict that provides some interesting exploration of the characters, demonstrating that while Miranda is heroically altruistic, she's also stubborn, focused on her goals to the point that she neglects to take care of herself, which leads to a volume-ending cliffhanger, and what might be a continued look at what drives her and how she can balance her work, personal issues, and family. Between all the inter-dimensional fistfights and planet-saving chases, of course.

Miranda is a pretty great character, all calm competence and quick-thinking action, keeping her personal struggles internal and letting Jack do most of the emoting for her. What's especially nice is that her race could go completely unremarked; as it should be (and hopefully will be in the future), skin color has no bearing on her heroism. However, writer Brandon Thomas includes at least a few references to racism, or at least discrimination and xenophobia (hey, the future isn't perfect), before a final-chapter revelation that suddenly brings race front and center, with Thomas optimistically demonstrating humanity's potential when pointless, arbitrary prejudices are removed. It's a pretty moving statement, and it makes for a fascinating underlying theme beneath all the action and adventure. 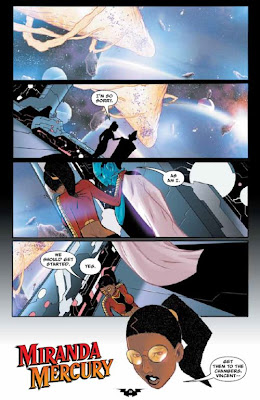 If there's anything to complain about here, it's that sometimes the stories move so fast, it can be difficult to tell what exactly is going on. Luckily, this is more a feature than a bug, with the creators never standing still long enough to allow anyone to get bored, forcing readers to stay light on their feet and keep up with the breakneck pace. Layouts, action, and sometimes even plot points can be tough to interpret, but this comes from ambition rather than clumsiness, and if we're being generous, it fits within the conceit of the long-running series, assuming that readers are familiar with this world (er, galaxy), these characters, and they way they work. When Miranda and Jack are apparently miniaturizing an entire planetary civilization and coaxing a sun to migrate to a new location, this can seem obtuse, but when a mission to capture a smuggler leads to Miranda being wanted by authorities and pursued by a team of superheroes, it's exhilarating, providing the sense that anything can happen before you can even realize it. It's innovative, modern storytelling, seemingly catering to the ADHD set but actually forcing close attention, and even coming up with interesting formal ideas like missing (that is, stolen) panels and spatial reorientation of pages. There's always plenty going on here, both on and under the surface. 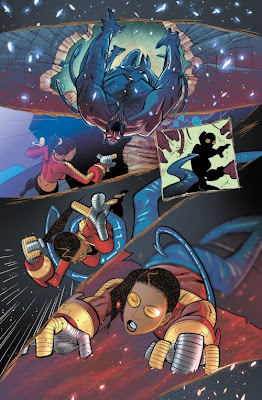 For anybody who was waiting for more of this story, this is a real treat, collected in a gorgeous hardcover that is designed to the hilt, the story beginning on the inside front cover and never letting up, text pieces introducing each chapter so that the stories can begin in the middle of the action, bright colors popping off the page and providing a futuristic look, clean, dynamic art propelling the eye across layouts, the whole thing working pretty amazingly well as a great bit of pure comics storytelling. This book was definitely worth the wait, and hopefully it won't be another several years before another volume sears its way into our consciousness along with it.
Posted by Unknown at 7:00 PM