Sweet Tooth: It has turned sour 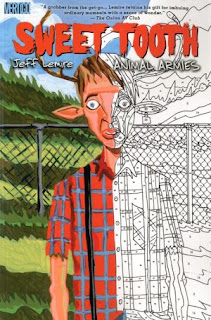 I hate to complain about creators that I like, but this volume of Jeff Lemire's ongoing Vertigo series left such a bad taste in my mouth that I had to say (that is, write) something, at least to clear my head of the negative vibes. I had some reservations about the series in the first volume, and the second, while readable, didn't really get me excited, but this third volume was when I tipped into outright, eye-rolling negativity. While Lemire did an excellent job with his withdrawn characters in the Essex County Trilogy, he continues to display a lack of imagination here with his post-apocalyptic world, filling it with the standard ruined buildings, empty landscapes, and protective authority figures. The wispy art that worked so well on the empty vistas of rural Canada often seems hastily sketched here, and Lemire still has a problem depicting coherent action.

None of that has really changed since the beginning of the series, but what ends up being especially distasteful here are the attempts to shock, which seem ham-fisted and manipulative; The Road this ain't. The worst and most laughable involves a cult leader who keeps his five vicious dog-children on leashes. How he managed to build a city-conquering following of mask-wearing animal-worshipers is unexplained, but he's the type of cackling, violently crazy villain that shows up in B-grade action movies. We get to see how terrible he is when he explains that his wife died giving birth to her litter, so he let the babies eat her corpse. This is supposed to be repulsive, but all I could do was express disbelief at the thought that human, canine, or human/canine newborns would be eating meat. That's how well thought-through this world seems as a whole, really.

This volume's attempt at tragic poignancy in the climax is another bit that just seems manipulative (I'm going to spoil a big reveal from the ending of the volume here, so skip to the next paragraph if you really don't want to be surprised). The brutish Jepperd, who leads a rescue attack on the compound where deer-boy Gus is being held, finds out during a fight that his son, who he was told died in childbirth along with his mother, actually survived. Then, as he is rescuing Gus and some others, one of the kids, a horse-boy, gets caught by the evil dog-boys, and Jepperd forces everyone to leave him behind, but not before the boy (who hadn't spoken before this point) lets out a plaintive "Da?" Why, could this be Jepperd's long-lost son, which he just left for dead? Yes, it is, and we're all supposed to be so devastated. But we're not, we just sigh at the tiresome attempt at tear-jerking, which started with a sneering villain announcing the long-kept secret in the middle of a knife fight (which contains a page with an awkward panel arrangement that is read clockwise, stranding the reader's eye on the left side of the page) and ended with an escape that makes little sense in terms of where characters are situated in relation to each other. It's clumsy and poorly executed all around, and Lemire should be much better than this.

That's not the full extent of his ineptitude, however; much of the art and storytelling in general is poorly done. Action is often amateurishly done, with characters not moving or interacting believably. Take, for instance, this two-panel sequence from the middle of a fight scene, in which Jepperd is being held to the ground by a boot on his head: 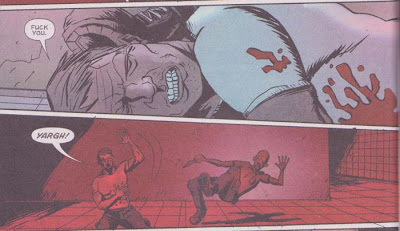 That's a hell of an arm motion that can send a man flying like that. While not everything is so poorly done, Lemire does seem to struggle in the attempts to depict the violence that should be so essential to the series. Bad superhero artists often get made fun of for this sort of thing, and just because Lemire draws in a rougher style, he shouldn't get away with it.

The character work isn't much better, but it's fairly consistent, fitting in Lemire's standard style. However, the  cult leader once again provides an example of ugliness, being depicted with a more rendered, shaded face than the others: 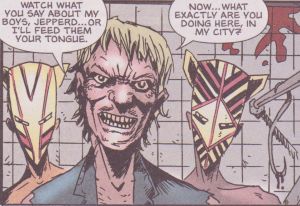 It's a weird effect, like a Benjamin Marra version of an evil villain.

The odd pacing is another area of concern; Lemire can't seem to decide if he's going for propulsive action or slow contemplation. He wastes pages with pointless bits like a helicopter blade spinning: 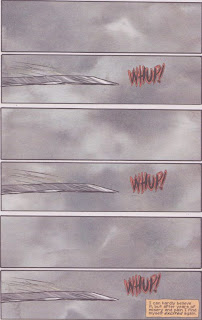 Or a fly buzzing around a room: 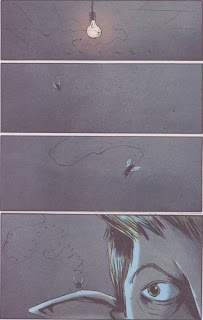 Or, in an especially banal attempt at an Eisner-style title page, a scene that just makes one wonder why somebody would set up big letters in a field like that, and why the characters wander by them without noticing: 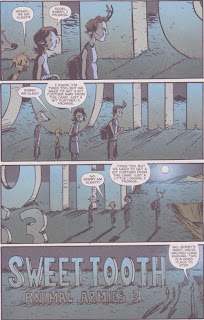 Other bits make one question the "reality" of the book as well; in one scene, a TV monitor displays an attacking horde of characters, but the image shown is obviously an image from the comic, and sure enough, it shows up a few pages later on what should be a big spread whose impact is dulled since we've already seen it (and also has the odd effect of making it seem like the attackers have been frozen in mid-charge for several pages).

The series seemed like it had some promise at the beginning, but this installment reveals that Lemire is well out of his depth here, and while it is admirable that he wants to stretch himself, the results definitely aren't worthwhile reading. It's surprising; Vertigo usually has better quality control than this. Maybe Lemire's attention has been drawn elsewhere by his work writing DC superhero comics; hopefully he'll finish this up soon and move on to something that is more his speed, but after this debacle, he's going to have to do something pretty good to get me back on his side.
Posted by Unknown at 9:34 PM