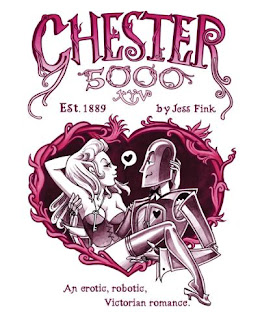 Well, this is certainly a pornographic comic. Yep, it's a full-on, hardcore, penetration-and-ejaculation sex-fest, and one that does its job, at least when it comes to stimulating arousal (TMI?). But luckily, it's a really good story as well, full of nice, stylish artwork, humor, and character development. Plus, it's pretty unique, being a steampunk story about an inventor who builds the eponymous robot to pleasure his wife so he can have more time in the lab, only to see her and Chester fall in love, leading to jealousy and retribution, all with sexy complications.

As naughty as all this is (and I can't emphasize the naughtiness too much, with most of the book being taken up by sex scenes that last dozens of pages), it's great to see Jess Fink's style unleashed, as she distorts her figures in orgasmic pleasure and surrounds them with expressively decorative panel arrangements, but still making every emotion and action perfectly clear while keeping the story completely wordless (outside of sound effects, of which "Vert!" is an unforgettable addition to the lexicon). It's a lovely object, and while it's not for kids (or prudes), it's a really fun read and a great example of the unlimited potential of comics.

The comic can be read online at Fink's site, but I recommend the physical version.
----- 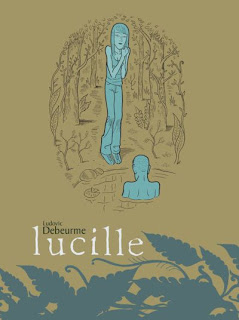 Maybe it's the European tradition this comic comes from, but it takes a little getting used to. The borderless panels aren't laid out in a consistent manner, so each page has a unique arrangement of cloudlike images that do read intuitively, but are definitely different from the comics norm. And within the panels themselves, the thin, somewhat bobble-headed characters live lives of quiet desperation, such that there doesn't seem to be much going on for a fair portion of the story, at least at first. But sticking with the story yields rewards; French cartoonist Ludovic Debeurme quickly establishes his teenage characters, an anorexic girl and a somewhat delinquent boy with an alcoholic father, then, after letting readers cringe at their awful lives for a while, throws them together and lets the inevitable young romance blossom.

While it's very cute and romantic and everything, what's nice about the book is that it doesn't end with their escape from their lives. They quickly and believably connect (Lucille's appreciation of Arthur's goofy teenage antics makes perfect sense for someone who has been forced into an environment of life-or-death seriousness), and it does seem like running off together will solve all their problems, but Debeurme sticks with them and shows that emotional issues don't instantly disappear when one runs away from them, and maturity doesn't instantly bestow itself on one either. Lucille still struggles with anorexia, and Arthur is still antisocial and prone to anger, and while their attempt at a new life is appealing, it seems doomed to fail. Interestingly, the book ends on a "to be continued", so while the story does come to something of an end, Debeurme evidently still has more to tell about these characters. This thick volume is a quick read, but it feels pretty substantial, and it's nice to see such confident storytelling in a style that isn't often seen on this side of the Atlantic.
-----

Reunion
By Pascal Girard
Published by Drawn and Quarterly 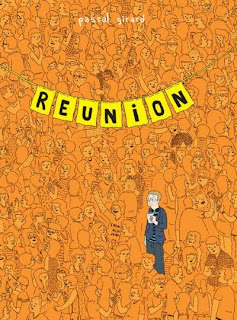 Pascal Girard is kind of a jerk, but at least he recognizes it. Or maybe he's just exaggerating in his self-deprecation, portraying himself as an arrested adolescent still mired in popularity contests at his ten-year high school reunion. Either way, he comes off as a doofus who obsesses over his perceived coolness (both in the past and the present), starts exercising just so he can lose weight to look good to his old friends, stalks girls he used to have crushes on (even though he currently has a girlfriend), cheaps out on the beer he brings to the reunion, attempts to ingratiate himself by bringing along some pot, and almost skips out on the whole thing, even after all his frantic preparations. It's not a pretty picture, but it is a funny one, with Girard making himself look like a fool, capturing his uncertainty and worriedness through the jittery lines of his artwork and delivering plenty of comeuppance to himself as he constantly fails in his attempts to make himself look cool. It's an amusing portrait of a near-universal experience, a relatable depiction of the way returning to your roots can make you fall into old roles, even as you are trying to demonstrate how you've risen above them. One comes away from the book wanting to spend more time with Girard, even as he's endeavoring to make himself look like the worst person in the room.
----- 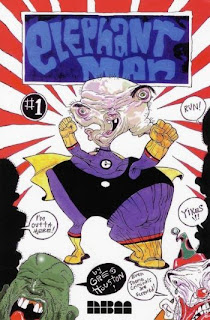 Man oh man, Greg Houston's comics are hilariously weird and silly, full of grotesque imagery, funny names, dumb jokes, random plots, and constant absurdity. This one takes the form of a superhero parody, but the parodic aspects are kind of weak and halfhearted (Stupid codenames! Corny catchphrases! The old "nobody recognizes Superman when he wears glasses" gag!), with the real appeal being the exuberantly odd art and humor, the book full of ramshackle storytelling that seems to consist of whatever Houston felt like drawing next, scratchy lines cohering to form crazily distorted characters (even those that are supposed to be good looking sport jutting foreheads, squinty eyes, protruding teeth, and greasy hair), word balloons and captions full of irascible, rambling text, and any chance for silliness being jumped on and flogged to exhaustion. It's a pretty unique sensibility, and Houston certainly seems to be having a ball coming up with funny concepts like a villain who is a walking punchline, being the fused-together body of a Rabbi, a priest, and a duck, or a group of girl vigilantes who sport baroquely detailed hairstyles, as if the hairstylists of the court of Louis XIV worked on the cast of Jersey Shore. It's a stupid comic, but purposefully so, with the "hero" apparently attaining his fame purely out of pity, the villains being incompetent morons who only commit crime out of jealousy, and pages filled with wonderfully detailed grime and ugliness. This is a highly entertaining bit of nonsense, and I wouldn't have it any other way.
-----

What I Did.
By Jason
Published by Fantagraphics 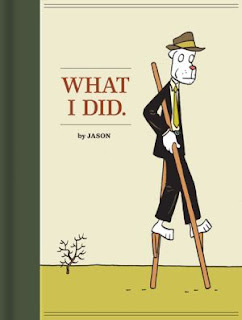 Of the three books collected in this volume, Hey, Wait... is a really evocative portrait of how childhood experiences can affect one throughout his entire life, and The Iron Wagon (which adapts an early-twentieth-century Norwegian novel) is a pretty good murder mystery that makes good use of Jason's deadpan style, but it's the middle entry, Sshhhh!, that really sticks with me, immediately jumping to the top of my favorites among the cartoonist's works. It's a silent comic, making excellent use of Jason's facility with pantomime as it follows a bird-man throughout his life, taking an absurdist approach to events that somehow makes things like a baby arriving via mail or a skeleton following the main character around seem relatable and poignant. The universality of the circumstances that Jason depicts is what is so striking here, so that even though the character is inhuman and inexpressive, we recognize things like the acceptance of death's inevitability, the loneliness of lost love, or the combination of pride and sadness felt when a child leaves home. Being one of Jason's longer books, the chapters of the story accumulate until the bird-man becomes a sadly human figure, somebody scrabbling to maintain his unique person-hood under the assault of life. It's sad, wonderful, exhilarating work, a great example of how amazing Jason is at what he does, and how nobody else can do it like him.
Posted by Unknown at 7:00 PM