Zegas and Lose: Some comics are worth the effort to seek out 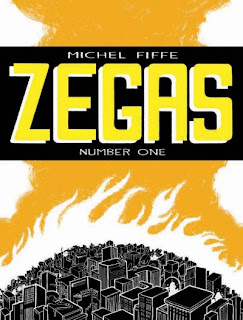 Michel Fiffe has style in spades, a really amazing vision that seems to be straining to be contained within the lines and colors of the printed page. Thick brushstrokes define somewhat cartoony characters, and attractively bright skies and cityscapes make for a beautiful world to be lost in, but then something will morph into weird tentacles and protrusions, giving things an organically weird vibe, a sense that anything can happen and anyone can dissolve into a heap of protoplasm at any time. It's a bizarre setting, an anything-can-happen freakscape, but Fiffe's sense of fun and deft character work makes it a place of fascination and wonder rather than some nightmare mind-prison.

In this magazine-size first print issue of his current series (which has been running as a webcomic for a while, although I believe this is all-new material), we follow the doings of brother and sister Boston and Emily, who seem like normal people living in the city but often experience strange, psychedelic occurrences that might or might not just be imaginary. The opening story is the highlight here, starting with Emily having a vision of the end of the world (strikingly and gorgeously depicted with bright slashes of black and red impacting the ground, cities being reduced to smoldering craters), then getting in trouble at her job, repaying a kindness from a street vendor, and chasing a strange thief through a video arcade. It's a nice combination of mundane and fantastical, with the chase scene being an excellent climax, the figures zipping across pages and around people and objects, the perpetrator eventually revealed as some sort of organic/mechanical creature, followed by a sweet denouement involving the vendor that provides excellent catharsis to the emotional highs and lows of the rest of the story.

Boston's story in the second part of the issue, which sees him accidentally ingest something that makes his face swell up (but not as grotesquely as some of Fiffe's other bodily transformations) isn't quite as arresting, but it's still pretty interesting, playing like an especially Fiffe-ian version of Pulp Fiction's adrenaline shot scene. The issue also includes two short pieces, one adapted from a found note that didn't make much sense to me, but seems like an attempt at visual poetry, and the other an amusing conversation between Fiffe's super and landlord, depicting them as abstracted conglomerations of shapes. As a whole, the comic is a pretty nice package, a large-scale showcase for Fiffe's fantastic artwork and his expert grasp of characters, the way they move through their lives, and their realistic conversations. If anything, it's a teaser, something that makes readers eager to read more of his work. Luckily, if they seek him out, they certainly won't be disappointed.
----- 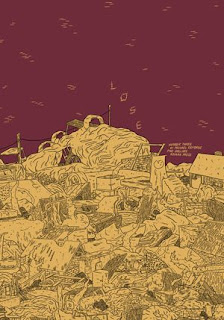 If there were any doubts that Michael DeForge is the premier purveyor of disturbing visions wrenched from the unconscious married to unnervingly realistic depictions of modern angst, this issue of his one-man anthology series should put them to rest. Nobody else can create the viscerally creepy imagery that he does, full of weird (yet somehow familiar) creatures constantly oozing with perspiration, piles of oddly specific trash and wreckage, and dripping, mucousy tentacles, among other multitudinous horrors. There's much more to his style than freaky pictures though, which, as amazingly done as they are, wouldn't be all that unique on their own. No, it's the depiction of the raging feelings of inadequacy felt by modern man that really strikes one to the core.

In the main story here, "Dog 2070", a divorced father struggles to relate to everyone around him, from coworkers who worry about a cancer-stricken fellow employee to his own children, everyone seeming like barely-comprehensible alien creatures. DeForge paints a pathetic picture of a man unable to will himself into any sort of personal or professional success or even make a connection with any of the people around him, mired in his own self-doubt and crippling social anxieties. That this whole story is acted out by creepy anthropomorphic dog-creatures living in a ruined, post-apocalyptic world is just the icing on the cake. That window-dressing is all metaphor for man's inhumanity and the ruined state of the modern world, but the disturbing inability to relate to another human being is the terror that radiates from the story's core, and it's harrowing stuff. 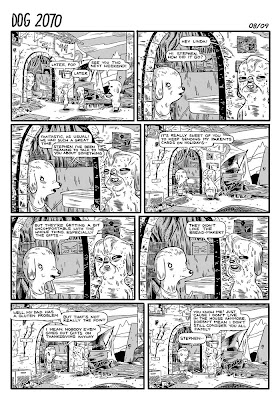 Some other, shorter stories fill out the issue, including a scene in which an improv comedy troupe commits horrible acts in order to summon the subject of the audience's suggestions from a hellish portal, a story in which the idea of cute anthropomorphic depictions of animals is eviscerated as some ants mourn their lot in life as automatons helpless against the scourges of the world, and a horrific, completely alien scene plays out in which some creatures who pilot faceless husks meet, mate, and have their baby stolen by some sort of flying harpy. It's all striking, weird, bizarre, and gorgeously depicted. The easily-understandable iconography, viscerally disturbing imagery, and ominous feeling of creeping dread persist throughout, making for a wonderfully cohesive comic, even if its one that is almost too unnerving to experience twice. As one of comics' rising stars, DeForge continually reminds us why he's worth paying attention to, with this collection of visions beamed from his brain onto the page possibly being his best work yet.
Posted by Unknown at 7:00 PM