The Arrival: Much better than the Charlie Sheen movie

I got nothing to point to today on other sites, but here's a review of a damn good book:

The Arrival
By Shaun Tan 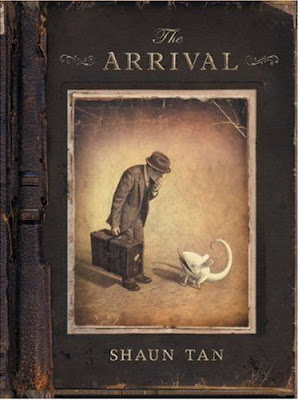 This wordless graphic novel is a breathtakingly beautiful metaphorical look at immigration, with artwork that is just incredible. It's a fairly simple story, but the details are what stand out; Shaun Tan uses a style reminiscent of Brian Selznick (The Invention of Hugo Cabret) or maybe Renee French to depict a man's journey into a strange and baffling land of wonders. This new land is mindboggling in its detail, with crazy architecture, bizarre creatures, flying airships and incomprehensible symbols everywhere you look: 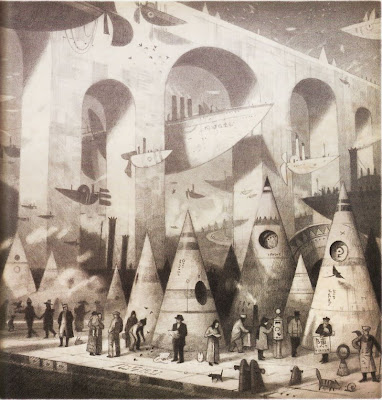 Tan often fills up double-page spreads (in a book that's already oversized) with stuff to look at and plenty of surreal touches. I'm at a loss for words to describe how overwhelming it all is, and that's kind of the point.

We watch a man as he leaves his wife and daughter to travel to this new country from his oppressive homeland (which seems to be haunted by dragons), endures a long naturalization process, and then struggles to find work and just take in everything that is going on around him in this crazy place. As he adapts to life there, he meets several other immigrants and hears their stories, and they're all rather affecting: a young woman escaped sweatshops and hid on a train; a family fled from a land full of cubist buildings and giants who sucked people up into huge vacuum cleaners; an old man went off to a glorious war, only to be wounded and see his homeland devastated. It's an evocative look at stories of immigration, and while it's removed from reality, it still has real emotional impact.

Really, the emotion and feeling are central to the book, and Tan does an incredible job of conveying this feeling almost solely through facial expressions: 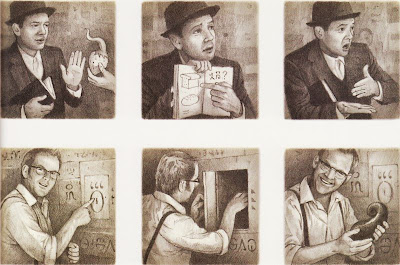 His technique is so effective, I almost cried when the main character finally reunited with his family. Atmosphere also helps; the new land is bright and airy, while the oppressive countries the immigrants fled from are dark and scary: 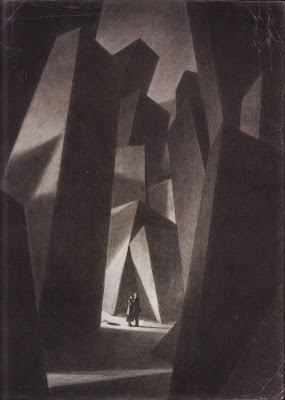 I can't recommend the book enough; it's really an amazing work of art. While it's not strictly allegorical (I don't think the "familiar" creatures that follow people around are supposed to represent anything in particular, to name one example), it still communicates the confusion and wonder of the immigrant experience, as well as the sadness of leaving one's family, the welcoming nature of friendly people, and the joy of being with your loved ones. Read it if you get the chance.
Posted by Unknown at 9:44 PM