Unbeatable: I, unfortunately, am quite beatable

Hey, where have I been? I've still got plenty to review, but I'm just going to go with this one for right now. Family emergencies have kept me busy over the weekend, but I might be able to get some stuff done over the next few days. Anyway, here's an interesting little book: 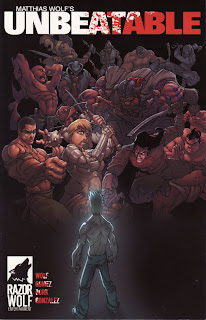 So here's the description of this independent graphic novel, as printed on the back cover:

"A young man awakens in an asylum with no memory of how he arrived. His only escape from the padded walls are his nightmares, where he dreams of fighting the greatest warriors in history. He suffers constant beatings and thousands of deaths. Is he going insane? Or is it something else?"

It's an interesting concept, one that grabs the reader and gets them interested. And the book starts out well enough, with the young man, Heimen Dale, waking up in that asylum, struggling to figure out where he is, and flashing back to what happened before he got there. Unfortunately, what seemed like it might be a short flashback ends up taking up half the book. We learn about Heimen's childhood, how he fell in love with a pretty girl, his relationship with his father, and some weird occurrences that eventually led to him possibly going crazy and ending up in the asylum. Eventually, we get back to where we started, and the story begins to pick up, with Heimen questioning his sanity as he experiences repeated violent deaths each time he falls asleep and no indication of any other human contact when he is awake. This stuff is really interesting, making the reader wonder what is happening, why he is going through this, how his father is involved, and if he will ever find a way out.

But that first half of the book is kind of a drag. It's not bad, but it could definitely have benefited from being broken up into several flashbacks interspersed between Heimen's nightly violent dreams. It's important groundwork, crucial to understanding the eventual revelations, but it seems like marking time until we can get to the exciting stuff.

Writer Matthias Wolf (who is also the founder of the independent publisher, Razor Wolf Entertainment) does a pretty good job of characterization, especially in the relationship between Heimen and his father (who shares the same name). Heimen Senior's seems to have a cowardly philosophy, encouraging his son to run away from any danger, but we eventually learn that there is more to him. And Heimen Junior is pretty attached to his dad, which is the eventual reason for his "incarceration". The peripheral characters do suffer a bit though; Heimen's girlfriend is little more than a pretty face (attached to the requisite huge breasts), and his mom appears in all of two panels. But the central characters are pretty interesting and compelling, especially after the big reveal at the end of the book.

Carlos Gomez's art is also pretty nice; it's crisply cartoony, reminiscent of UDON Studios' video game adaptation art. He's also aided quite a bit by Simon Bork and Teodoro Gonzalez' coloring, which really adds to the atmosphere; early, happy scenes are bright and cheery, but later, when the story takes a dark turn, the panels become dark and menacing. The colors were probably all done in Photoshop, but they occasionally use an effect that I really like, in which colors look like they were smeared on the page finger-paint-style: 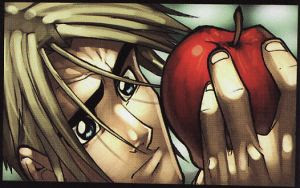 Gomez is also quite dynamic, making the actions scenes really come alive. There are a couple awkward, hard-to-follow bits in the first half of the book, but by the time Heimen is in the asylum, living out violent deaths night after night, the action starts to really pop, with Heimen sometimes being killed five or six times on one page. Gomez also does a great job highlighting Heimen's mental state; after a while, he begins to cover the walls of his cell with writing about his experiences; it reminded me of the beginning of the movie Oldboy. I did begin to wonder how long he had been there though; his hair doesn't get any longer, and he doesn't grow any facial hair, even though his notes say he was in the cell for over a year. But overall, Gomez does a really good job, even working in some visual clues that make perfect sense after the ending revelation.

I do have a bit of an issue with the art, but it doesn't have to do with any problem of Gomez's. He does a great job with what he is given, but I wonder if he was the best choice of artist in the first place. We find that Heimen's nightly "dreams" are actually encounters with actual historical figures (or legends), like Achilles, Joan of Arc, the Three Musketeers, Robin Hood, and Musashi Miyamoto. But they all seem too cartoony to have much impact; for instance, Joan of Arc seems more like a video game version of herself rather than the actual person: 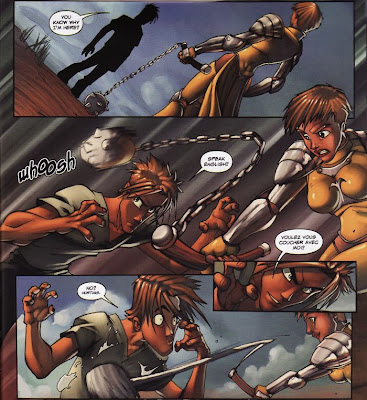 And Musashi Miyamoto, who turns out to be pretty important, is hard to take seriously as "the greatest swordsman in the world" with his goofy bright red armor that doesn't look much like samurai armor at all: 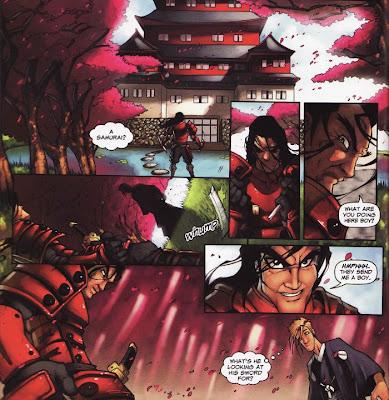 But really, it's just a question of my taste, and at least we did get a cool version of Bruce Lee:

Another quibble: the dialogue is sometimes awkward, and some more clever wordplay could have definitely livened up the first half of the book. Wolf often uses full words when contractions would sound more natural; a lot of the speech balloons would sound wrong if they were actually spoken. And the ending, while offering a satisfying explanation for all that has come before, is basically one character giving an exposition dump in a pretty non-dynamic fashion. Really, none of the problems are dealbreakers; they seem more like mistakes that come with being new to the creation of comics.

Really, it's a pretty good book, especially considering its independent origins. The artwork is slick and pretty, and the paper quality, binding, and presentation are very professional. I definitely hope to see more work from these creators.

So, I'll give the book a qualified recommendation; it's not perfect, but it's entertaining and shows a lot of promise. If you're interested, you should be able to order it from your local comics retailer or get it on Amazon for $14.95. If it sounds like your sort of thing, check it out!

This review was based on a complimentary copy provided by the publisher.
-----

I think that will be all for today, but hopefully tomorrow I'll start on a whirlwind of reviews, burying readers in my all-important opinions. Beware!
Posted by Unknown at 7:47 PM