Tekkon Kinkreet: I don't know what that means

Really, I would have preferred just Black & White, although I guess the official title is Tekkon Kinkreet (or Tekkonkinkreet): Black & White: All In One. Whatever. I've been trying to think of a way to come at this for a few days, but I've been either sick or writer-blocked, so I haven't written anything. But I'm going to get it done, dammit! So this is my disclaimer, in case the review sucks. Enjoy!

Also: I reviewed Special Forces #1 over at IndiePulp. Enjoy that too! Taiyo Matsumoto has one hell of a unique style, not really fitting into the standard manga aesthetic (or the view of manga that we have in the West, anyway) but seeming weird enough that it doesn't look like any Western comics either. He throws the stylistic aspects usually (stereotypically?) associated with manga (big eyes, speed lines, etc.) out the window, retaining only stuff like crazy character designs (which still don't seem too manga-ish) or Tezuka-style slanted panel layouts. Really, the characters seem more like something seen in independent American or European comics, but there are tons of crazy details that you would never seen in Western comics, like the smiley-face sun and moon that hang in the sky or the garishly decorated buildings that seem like Tokyo turned up to eleven (judging by pictures and movies I've seen, anyway). He clutters up the backgrounds with tons of details, and gives the cityscapes a surreal, almost cubist touch, making buildings curve and bend at unnatural angles: 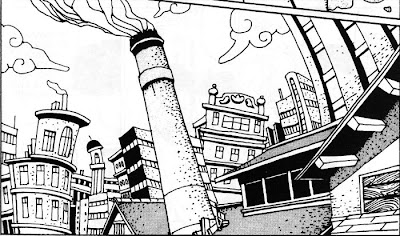 It's rather offputting, but it makes for an arresting reading experience. He also defines a strange, somewhat futuristic city full of bizarrely-dressed gangsters and thugs and ruled over by a couple of wild kids who seem to have superhuman acrobatic and fighting abilities. This could be compared to Western artists like Brandon Graham, Corey Lewis, or Bryan Lee O'Malley, but while they use these tropes with a knowing eye or make sure to point out the weirdness of their setting, Matsumoto plays it almost completely straight, with characters acting like their world is completely normal. I'm actually guessing there's some cultural connotations lost in translation here, with ruminations on the changing landscape of Japan, but even if that goes over my head, it still works very well as a story.

Oh yeah, I guess I should mention what the deal is with said story. It's about those two rogue kids, Black and White, who defend the futuristic Treasure Town against the incursion of violent gangsters and freaky assassins. They're an interesting duo; Black is older and "wiser", taking care of the younger, more naive White as they get in fights with troublemakers around the city. Matsumoto defines them pretty well, with Black often asserting that this is his town and he won't let anybody take it over. White, on the other hand, is imaginative and free-spirited, wearing goofy, outlandish clothes and making regular phone calls to space, reporting on conditions down on Earth. Their relationship and characters are very believable (outside of the ass-kicking and building-jumping).

The main plot conflict (which doesn't really show up until halfway through the book; the first 250 pages or so are spent establishing the setting and characters) involves some gangsters trying to take over the city. They end up sending some freaky assassins after the "stray cats" (as Black and White are often referred to), causing the police to separate Black and White after the latter is wounded. This causes Black to seemingly lose touch with humanity; he becomes increasingly brutal and feral, eventually manifesting his negative emotions in an evil avatar known as The Minotaur, who has a psychic battle with White for Black's soul. It sounds strange, but it makes sense (sort of).

Even if this sounds ridiculous and pointless, it's a great read, mostly because of Matsumoto's expressive artwork. He does some incredible stuff, packing panels with details that might or might not be "real". When the very buildings seem malleable and people walk around wearing black bodysuits or sport mohawks and tribal body paint, a vision of fish floating around the characters doesn't even seem out of place. But even the regular action is breathtaking, putting the reader right in the middle of the action: 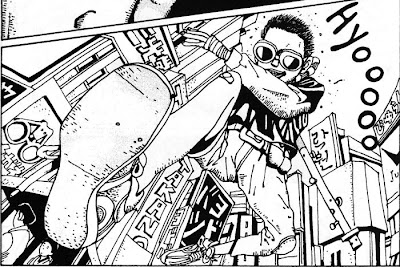 One of my favorite of his visual tricks involves what I call "implied speed lines". He doesn't go overboard with the use of speed lines to demonstrate movement, but he sometimes actually angles the backgrounds to imply motion: 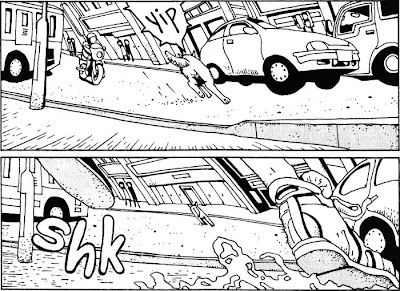 That just blew me away. And then there's the beautiful chapter title illustrations, in which he often collages a bunch of images together in an amazing manner: 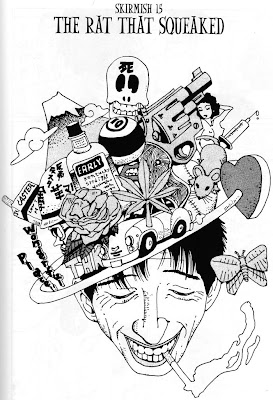 Wow. And I haven't even discussed the sharp dialogue (props to the translators) or myriad distinctive supporting characters. It's a rich book that you can pore over looking at all the content; totally worth the $29.95 price tag. I really can't recommend it enough.
Posted by Unknown at 5:56 PM