Yotsuba&!: Does the exclamation point signify excitement or trepidation?

Okay, I'm finally getting to my backlog of stuff to talk about. Here's one everybody seems to like: 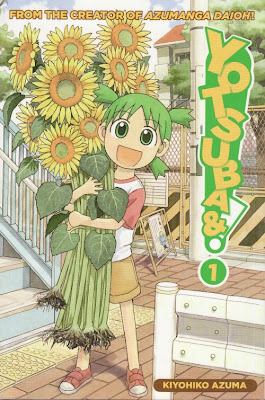 Perhaps my expectations were built up a bit too high by the constant praise this series gets around the comics internet, but I found this volume to be slightly disappointing. Sure, it's enjoyable, but I was expecting some sort of dazzling comic romp that would change my life and make me want to sire fifteen little Yotsubas. Instead, the book is kind of low-key and gentle, offering sweet little character moments with occasional high-spirited antics.

For those who don't know (perhaps you've only just now discovered these things called "comics blogs"), this manga series from the creator of Azumanga Daioh (which I haven't read either) follows the day-to-day life of an excitable young girl named Yotsuba and those around her, including her single adoptive father and their next door neighbors. Yotsuba is a bit of an oddity, seemingly having never encountered such normal fixtures of modern life as air conditioning or playground swings. Much of the charm of the series comes from her excited reactions to these mundane objects; I'm sure the expected response to every page is "Oh, how cuuuute!" (I believe the Japanese term for this is kawaii) .

And really, it is pretty cute. Yotsuba has such a shining personality, you can't help but smile when she realizes she's going to be living in a new house: 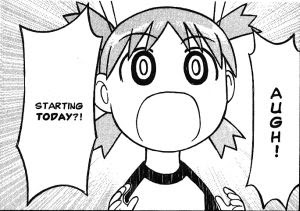 Or that the neighbors are going to give her some ice cream: 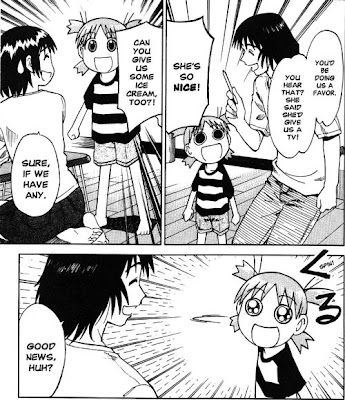 The other characters are pretty well-realized as well, from the three neighbor girls to Yotsuba's dad Koiwai and his friend Jumbo. Most of the fun comes from Yotsuba provoking/irritating/confounding/etc. the other characters, but they occasionally interact with each other in other ways, showing that Azuma has developed a nice cast here and not just a bunch of cardboard cutouts for Yotsuba to bounce off of. I loved the bit where Koiwai and Jumbo almost break out into a martial arts battle over a minor argument: 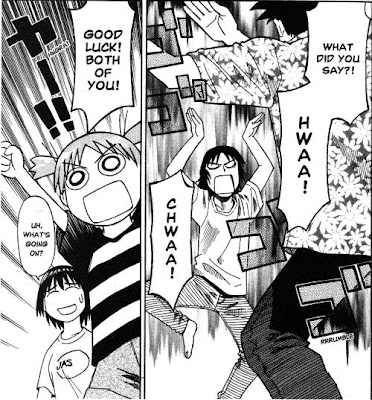 Azuma's clean art really excels, with detailed, well-rendered backgrounds, likable character designs, and clear, easy-to-follow movements. He also has a masterful sense of timing, often adding a couple silent panels after a funny moment to show the characters processing what happened before they react. I especially like the aftermath of Yotsuba's first attempt at operating a swing: 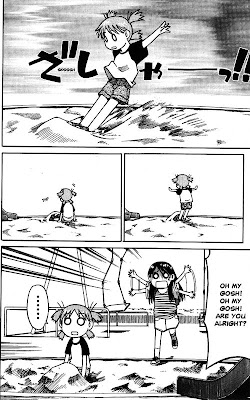 You know, I think I've convinced myself that I actually like this series quite a bit. I had originally intended to say that I probably wasn't going to keep reading the series unless people assured me it got more hilarious in future volumes (or if my wife became addicted to it), but I think I'll get the next volume, at the very least, and see if my affection continues to grow. It's definitely not bad by any means, but I had originally thought maybe it just wasn't my thing. I think I've managed to talk myself into liking it though, so I'll see what happens next.
-----

So that's one down. I've got at least two more books to cover, but I don't know if I'll get to any of them today or not. Stay tuned and see!
Posted by Unknown at 5:43 PM