King of Thorn: Despite the title, there's more than one thorn in this book

Okay, I'm finally getting to some of these reviews that I have backed up, but first, I want to remind people about my contest. Help me spruce up the blog, and win something for your trouble! Okay, on to business: 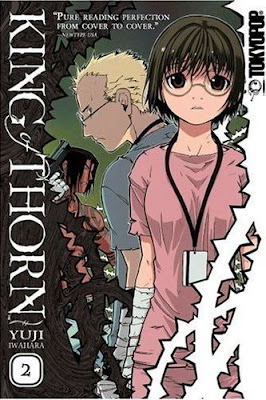 This is a pretty good follow-up to the first volume of this series (which I reviewed at the bottom of this post), with more adventure, big action, gruesome deaths, and even the beginnings of some answers to the central mystery of the series (which would be "What the fuck is going on here?"). When we left the small band of survivors last volume, they were escaping their island prison through an underground/underwater tunnel, and in short order they encounter some plesiosaur-like monsters, fight among themselves, get separated into several groups, fight a bunch more monsters, and discover some secrets, both about their apocalyptic landscape and each other. It's exciting stuff that doesn't let up for pretty much the entire length of the volume, and it has me ready for the next one to show up.

I'm also really digging Yuji Iwahara's art style; it's very detailed, with more of a sense of space than a lot of manga that I've read. It's a style that fits this series very well, with its characters fighting for their lives in tight passageways and monster-filled passages. The character and monster designs are also pretty sweet, and the action is pretty incredible. It occasionally gets slightly hard to follow, but for the most part it's dynamic and exciting. I definitely have to give props to one of the best impalings (impalements?) I've seen in a while, especially since it manages to be sacreligious as well as visceral.

So, yeah, I'm ready for the next volume. I want to see how/if the various members of the group manage to reunite, who the strange cloaked girl is that is watching from the wings, what exactly happened to the world, and how these characters are involved. Unfortunately, I'll have to wait until February for the next installment, but maybe I can grab Iwahara's other series, Chikyu Misaki, in the meantime to tide me over. Because I don't read enough manga already.
-----

Another review tonight? Maybe!
Posted by Unknown at 8:17 PM