Scott Pilgrim Gets It Together: 9999 experience goes a long way

That's right, I'm lucky enough to have read the new Scott Pilgrim book before it hits the stands. You may all bask in my glory. And if you want, you can read my review of The Expendable One volume 2: The Boob Versus the Boobs over at Silver Bullet Comics (quick summary: it's not good). Okay, on with the main event:

UPDATE: I've removed some images (due to spoilers) at the request of Oni Press and Bryan Lee O'Malley, but hopefully the review still makes sense. Sorry if it impairs readability for anybody.

Scott Pilgrim Gets It Together
By Bryan Lee O'Malley 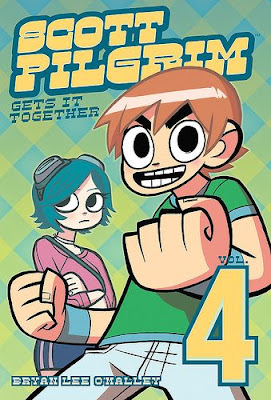 I haven't reviewed any of the previous Scott Pilgrim volumes, because the most recent one came out before I started blogging. But I'm a big fan of the series, and I love the way Bryan Lee O'Malley combines goofy humor, video game references, over-the-top action, and genuine characters and relationships into a satisfying, enjoyable whole. This volume is no exception; it sees Scott facing relationship problems with his girlfriend Ramona, the possible loss of the apartment he shares with his friend Wallace, the prospect of getting a job, shakeups in his band (the wonderfully-named Sex Bob-Omb), and two people trying to kill him. One of those is a strange Asian man who keeps attacking him with a samurai sword, and the other is the next of Ramona's evil ex-boyfriends, who, in a major twist, [SPOILER here! Highlight to read inviso-text] is a girl! The way O'Malley depicts Scott processing this information is laugh-out-loud hilarious [end SPOILER].

So it's an excellent volume of a consistently good series, but since I tend to overanalyze stuff, I'm trying to figure out what it is that's so damn great about it. Part of it is O'Malley's skillful cartooning; the characters are so expressive with their big eyes that it's easy to get caught up in what they're feeling: 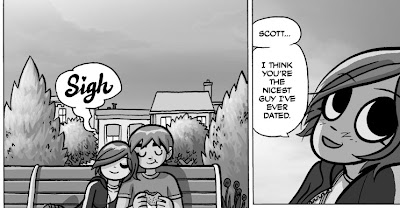 Of course, expressive eyes are nothing without good writing, and O'Malley has a great affinity for dialogue and characterization. Scott is funny and relatable because he's kind of naive, often surprised by the stuff going on around him (the character-related stuff, that is; he takes the fantastical fights and video game paraphernalia like save points in stride). I love the way he is amazed that one guy his friends know has a car. All the other characters bounce off Scott in fun ways; Stephen Stills and Kim Pine (his bandmates) kind of put up with him, acting aloof and overly cool. His roommate Wallace seems kind of protective, like an older brother. And Ramona is kind of withdrawn, but she really seems to care for Scott and enjoy being around him. They make a good couple, and it's fun to hang out with the gang: 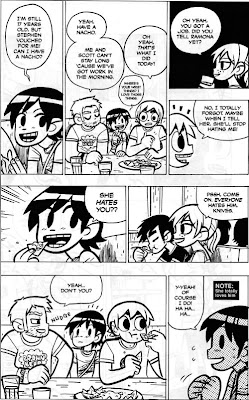 O'Malley is also great with timing, especially the comic variety. Whether it's Scott going to work: 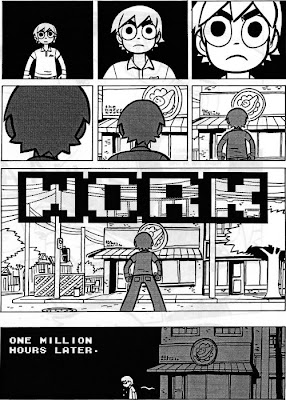 Or reacting to some good news:

It's all paced perfectly, and it reads really smoothly, adding to the enjoyable experience. And the dynamic comics "effects" he uses add a lot of punch to scenes like the one where Scott sees [SPOILER again! Highlight to read inviso-text, and click here for the image] Ramona talking to the girl who is trying to kill him [end spoiler], or when he runs to reunite with a special someone: 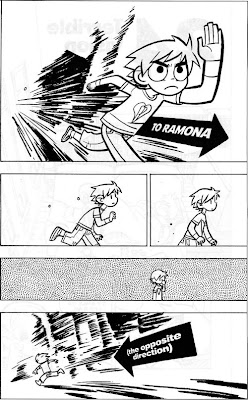 And don't forget the action! This volume is a bit lighter on the fights than the previous ones, but the ones that make the cut are awesome. Really, I could just open the book to a random page and find stuff worthy of pointing out; the entire thing is nonstop fun, just as Pilgrim fans expect. If you haven't read the series before, well, this isn't the place to start, but you should run out and get the first volume. You'll soon be hooked. If you're a longtime fan like me, this will not disappoint. Now if only O'Malley could get these things out more often than once a year...

The book comes out next week, on November 14, and it's supposedly slightly longer than previous volumes (216 pages) at the same price of $11.95. Get it!

Thanks to Oni Press for the review copy.
Posted by Unknown at 9:18 PM