Ayre Force: Oh, to be rich and self-important

Do I have anything up at the other site? I don't think so. I was supposed to write something about the latest issue of Northlanders, but I guess I flaked out on that one. Sorry, fellas. Anyway, here's this odd thing: 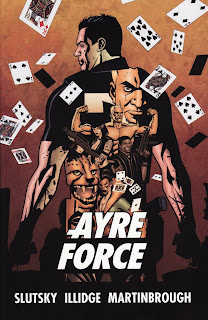 I don't think I had ever heard of Calvin Ayre before receiving this book to review, but apparently he's a big deal in the world of online gambling, having founded a company called Bodog Entertainment Group, which runs a major online poker site, and also owns a music label and sponsors mixed martial arts fighters. So, being a billionaire with money to burn (outside of his charity work), he has created and published this graphic novel, featuring himself as a badass action hero who rights wrongs across the world, leading a team composed of various Bodog personalities like poker players, recording artists, and MMA fighters.

Writers Slutsky and Illidge have done a decent job of turning these personalities into action stars, making Ayre over as a government mercenary turned "crusader for human and animal rights" who operates the whole Bodog company as a (highly profitable) facade to distract his enemies. They've also grafted exciting backstories onto the various team members, painting them as things like badass bounty hunters or exotic jewel thieves who were called up by Ayre to join his forces of good. And there's also the evil Janus Winter, a ponytailed rich douchebag/low-rent James Bond villain who performs lots of genetic experiments and whatnot while acting as a pharmaceutical magnate. Hey, sounds like it could be fun, right?

Well, it is, kind of. I can't fault Ayre for wanting to turn himself into an action hero; that would be a pretty cool thing to do if I had the money for it. And he does work real-world concerns into the story; the mission that kicks off the book sees his men shutting down an illegal bear bile farming operation. Initially, I thought bear bile farming was an exotic-sounding made-up practice, but it turns out it's all too real, and it's something Ayre's foundation crusades against. So good on him for getting the word out about it.

No, the real problem here is that the plot moves kind of overly fast, never really fleshing out any of the characters beyond them all being badasses. There are a few inspired touches, like Winter's evil "children", who have DNA spliced with animals, giving them the abilities to morph into a lion, run super-fast like a cheetah, or become invisible, chameleon-style. Sure, that's ridiculous, but I don't call for absolute realism in my action stories. It is nice to have relatable characters though, and aside from Ayre himself (who gets the most panel-time but still comes off as a cipher, with even "Calvin Ayre" being a pseudonym) and maybe his assistant, Fawn LaBrie, they're all just tough guys devoid of personalities.

And unfortunately, while Martinbrough's art is often nicely moody and full of noir-style shadows, I often had trouble distinguishing some of the characters from each other, and some "cool" poses occasionally came off as unintentionally amusing: 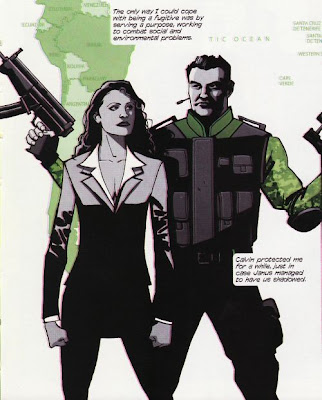 And many of the action sequences seemed kind of choppy and hard to follow. Early on, the team gets to do the bit where they have to clear a runway so Ayre's plane can take off. This climaxes in an exploding tanker truck, which the plane just barely clears. The problem is, before that panel, there was little indication that the plane had even started moving down the runway. Elsewhere, we see Ayre recruiting one of his operatives, a bounty hunter that is confronting a white-slavery ringleader in a grungy Southwestern bar: 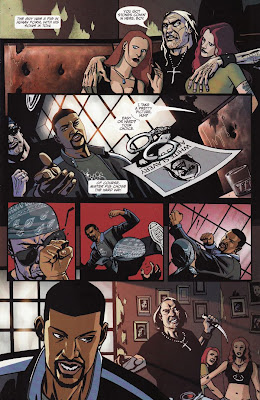 In that scene, is he beating up one bandanna-wearing henchman, or several? It looks like the same guy in each panel, but earlier we saw that the bar was full of bad guys, so maybe he's supposed to be kicking all their asses. It's hard to tell, and thus distracting.

So, I don't know, I don't think I can really recommend the book, unless you're a big poker fan or something and have a liking for these characters in real life. I would have loved to see what somebody like Matt Fraction or Ed Brubaker or Warren Ellis could have done with the concept, but as it is, it's just not really unique, innovative, or entertaining enough to keep my interest. It's not terrible or anything, just kind of mediocre. And with all the stellar comics out there, mediocre just isn't good enough. Maybe next time.

This review was based on a complimentary comic provided by the publisher.
Posted by Unknown at 2:12 PM