...And I'm back (although I'm actually writing this while still away. But I'll be back by the time it posts, I think). I want to thank everybody who contributed guest posts; that was a blast, getting to publish good writing by people I like to read. In fact, if any other readers want to send me something to post that would fit in around here, my email address is on the right side of the screen there.

Luckily, I managed to get plenty of stuff read while I was away, so I've got lots of material for posting here. First up is a comic that only just came out last week: 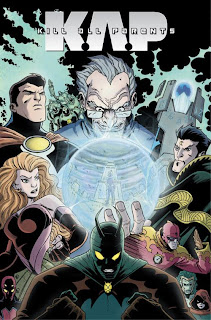 There are two interpretations that I’ve come up with for this one-shot comic by Mark Andrew Smith and Marcelo Di Chiara, and I have no idea if either one is correct, but at least one of them is interesting. The first one is that Smith (whose work I always want to like, since he co-created The Amazing Joy Buzzards, but sometimes ends up being kind of disappointing, like Aqua Leung) came up with a unique take on superheroics while he was out drinking or something. That take being: what if all superheroes came into being because somebody orchestrated the deaths of their parents/loved ones, giving them the motivation to fight evil? Unfortunately, Smith doesn’t really do anything interesting with the idea; rather than being original, the superheroes are obvious pastiches of Superman, Batman, and Spider-Man, the most obvious superheroes with dead parental figures. Other characters show up in the story, many of them being purposeful knock-offs of other supers like the Flash, Wonder Woman, and Aquaman, but Smith doesn’t bother to come up with anything original for any of them. And while he suggests some interesting plots, he doesn’t do anything with them. The superheroes all discover the conspiracy and take vengeance on the perpetrator. The end. I would find it interesting to see how they react to this revelation (especially a sequence in which the bad guy, and evil scientist, shows them how they would have turned out if he hadn’t taken his murderous actions), or what happens after they’ve lost their primary motivation. Or how newer generations of supers would develop with a lack of tragedy. But no dice; it’s just a cute idea, with little exploration thereof.

So I’m going to be generous, and give Smith the benefit of the doubt, since there’s a second, metafictional interpretation to all of this. I always enjoy explicit metafiction in which characters confront their creators (while it’s not a very good movie, the scene in Last Action Hero where Arnold Schwarzenegger the action-movie character confronts Schwarzenegger the actor for ruining his life gives me existential chills), and this story, while not being obviously metafictional, certainly has some implicit commentary, with the characters being enraged at the tragedy that their “creator” has inflicted on them. And there’s even a subplot about a government agent (the readers) who seems to be the real instigator of the conspiracy, pushing the scientist (the writers and artists) to keep the tragedy coming. At one point, we see the Superman analogue talking to his therapist about his problems, and the doctor turns out to be the agent, who was not really paying attention, drawing doodles of superheroes punching each other while pretending to take notes. That’s the fans for you, not caring about the boring real-world emotional stuff, only wanting to see more punching.

So I don’t know if that has anything to do with what this comic is actually about, but I thought it was an interesting interpretation. It’s a fun little story at least, with some nice art by Marcelo Di Chiara (and sweet colors by Russ Lowery, who also turned in some great work on the aforementioned Aqua Leung). At 35 pages of story, there’s plenty of room for detail-filled double-page spreads, and lots of action and whatnot. So check it out, if it sounds like your sort of thing. But you might have to be like me and do some mental exercises to get the most enjoyment out of it.
Posted by Unknown at 12:00 PM