As I mentioned Monday, I'll be on vacation for the next couple weeks, so I've recruited some internet friends and fellow bloggers to provide content while I'm gone. Enjoy!

For our first guest post, we've got Jason Powell, theater critic, Chris Claremont expert, and general all-around nice guy. He occasionally posts to his Livejournal blog, Ocean Doot, and he also has a regular series on Geoff Klock's blog, Remarkable, in which he is covering Chris Claremont's run on Uncanny X-Men, issue by issue. That series (which is over fifty posts long by this point and still has a good hundred or so to go) has been some great reading, so I'm happy to present his review of Claremont's newest series. Enjoy: 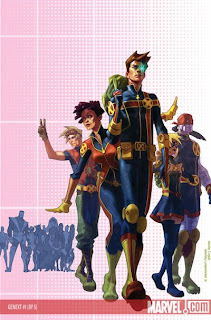 I'll admit, I was hoping for something a little different from GeneXt. When originally announced, the high concept for the series was that Chris Claremont -- godfather of the X-Men -- would write a "What If" story in a universe that saw the X-characters aging in real time (presumably beginning with 1963, the year in which the first issue of X-Men was released).

If it were up to me, I'd like to see this done in a style similar to Alan Moore's Supereme: A main story set in the present, but with occasional flashbacks to earlier decades -- written and drawn in the style of X-Men comics from that era.

The reality is less ambitious. The five-issue miniseries simply follows a new cast of original characters, all of whom (so far as we know) are children or grandchildren of X-Men characters.
Claremont introduces readers to five teenagers (presumably to mirror the fact there were five original X-Men in 1963), and -- in tried and true fashion -- shows them getting their fight on during a Danger Room training exercise.

The scene accounts for half the comic, and essentially allows Claremont to hit all the main points for each character -- their powers, their general attitudes, their feelings about each other. There's a cameo by a grey-haired Hank McCoy (who, assuming the "real-time" rule hasn't been tossed to the wayside, must be about 62 or 63 years old). But other than that, focus is pretty firmly on these new characters.

The second bit of the issue shows the kids in a more relaxed social atmosphere, which -- predictably -- turns ugly when they run into a couple of racist townies.

Overall, the issue is severely low on incident. There's no sense of what the next four issues will be about -- presumably this is going to be very much a character piece, exploring the personalities of the sons, daughters and grandkids of the first mutant generation.

Honored host Matt Brady expressed doubts as to how convincing Claremont's teenager-dialogue would be. True, Claremont is not necessarily a master of "realistic" dialogue -- and never has been. However, he typically writes teenagers in a way that, while not authentically capturing their vernacular, does properly convey the energy and rhythms of youth. (See: the way he wrote Jubilee back in 1989, or even how he wrote Gen-13 in 2002.)

That ability is more or less on display here. It is not Claremont's most efficient dialogue. There are a few glitches -- that perhaps should have been caught by the editor for adjustment -- wherein characters repeat lines of dialogue almost verbatim. (e.g., "I just need some time to myself." "You sure you're all right?" "I'm fine. Just want a little time for myself.") Considering that the whole point of the series is characterization, and that dialogue is Claremont's main tool in getting that across, these moments of redundancy are frustratingly uneconomical.

That glitch aside, though, the cast is likable. There are basically two angles to how they're handled: On the one hand, readers are invited to just enjoy their quirks and speculate on their futures: Will they all follow in their forebears' footsteps, or will some of them give up on the hero game altogether? There's also the requisite amount of sexual tension among the group, reminiscent of Claremont's early issues of New Mutants from the 1980s, when we all were invited to guess who might end up with who.

The other angle is to do with the mystery of the kids' respective pasts. As an example, one of them -- known only as "Rico" -- is described as being "third generation," and has the power to turn things invisible. Is the name "Rico," then, a derivation of "Richards"? Is he the son of Franklin, the grandson of the Invisible Woman and Mr. Fantastic? Becka -- the putative lead in the series -- is the daughter of Storm, but that's all we are told. What is her relationship to her mother? How and where was she raised?

So, the issue primes readers to look questioningly in both directions: Where did these five kids come from, and where are they going? The success of the remaining four issues will rest largely on how satisfyingly these questions are answered.

The artwork is rather lovely, and appropriate to the story Claremont is telling. Penciller Patrick Scherberger and inker Norman Lee display a heavily cartoony style -- dynamic, energetic, bouncy and easy to look at. There's a sheen of modern-ness to the comic that fits its "new generation" premise.

All in all, a strong issue. A little simple and uneventful perhaps, but in that simplicity lies no small amount of charm. I'm very much hoping that Claremont will keep the good times rolling with this one.
Posted by Unknown at 12:00 PM