Vacation Guestblogstravaganza! Jones squeaks in under the wire

I thought I was all done with the guest posts, but I received one more, from good old Jones (one of the Jones boys). Take it away, Jonesy!
-----

No, no, you're thinking of the other guy. The name's Jones, one of the Jones boys. I'm just subbing for the hardest-working man in the comic book reviewing business. You should come over for a duck dinner some time.

You bring the ducks.

So, sorry, kids, but you'll get none of that squeeing starry-eyed heroine stuff today. Instead, have a two-fisted, rambling "review" of Jack Kirby's OMAC: One Man Army Corps.

...if you think you're ready for the world that's coming!

If aliens were real, what kind of comics would they read? 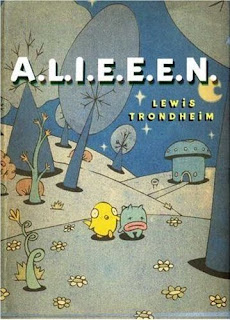 English readers have recently seen two very different answers to that question. The first is A.L.I.E.E.E.N. (First Second, 2006), which purports to be an actual alien comic book discovered by prolific French cartoonist Lewis Trondheim. In the foreword, Trondheim claims to have done no more than hand the book over to the publishers, but it looks suspiciously like his work, viz. surreal, cartoony and with a liberal dose of cruel black humour. Seems like aliens eat that shit up. 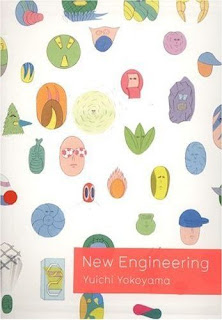 Then, in 2007, Picturebox released an English language version of New Engineering, by manga-ka Yuichi Yokoyama. In some ways, New Engineering is exactly what you'd expect from a Picturebox manga -- deliberately obscure, with little to no narrative, relying entirely on unconventional visuals to do the aesthetic heavy lifting.* At the same time, it's like nothing else you've probably ever seen, either. In an interview at the end of the book, Yokoyama explains how he wants to erase "the human trace" from his work, and that's as good a description of his work as any. Yokoyama shows us page after page of puzzling scene, where peculiar agents perform baffling actions, for reasons unknown and to mysterious ends. Even more than A.L.I.E.E.E.N., New Engineering shows us that comics not designed for humans are really, really fucking weird.

But frankly, Trondheim and and Yokoyama needn't have bothered. For one cartoonist got there ahead of them -- thirty years ahead, in fact -- and already gave us a vision of alien entertainments designed for strange, unearthly eyes. I'm talking about Jack "King" Kirby and what is surely one of the oddest comic books ever made, OMAC One Man Army. 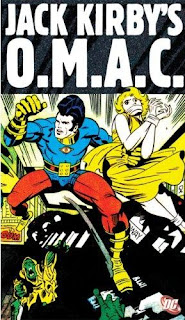 Lasting just 8 issues, OMAC came at the tail end of Kirby's second stint at DC, in the 70s, after the success of Kamandi, and the (perceived) failures of The Demon and his Fourth World saga.

With the exception of Kamandi, most of Kirby's 70s work isn't as accessible or, let's face it, as fun as his more famous collaborations with Stan Lee at Marvel. Throughout the 60s, Lee really did humanise Kirby's work, bringing it down to earth with the bickering of the Fantastic Four or the soap-operatic secret identities of Thor, Hulk, et al. These may have been god-like figures (or, in some cases, actual gods) but, as Lee scripted them, they were also all too human, and eminently relatable.

But even in the 60s, you can see Kirby straining against the human and reaching towards the inhuman, the monstrous, the alien. It's there from the start in the character design of the Fantastic Four, three sideshow freaks and one flat out monster. It emerges again, around FF # 60 or so, when Kirby seems to grow bored of the world's greatest family, and just starts drawing issue after issue focussing on the Inhumans (note the name!) or the alien Silver Surfer. And you can see it in Thor, where the mythological stuff gradually takes over and the hero is eventually revealed to be, not a man who becomes a god, but a god who has been disguised as a man.

OMAC fits neatly into the overall pattern of 70s Kirby: explosive action stories with nothing remotely resembling human emotion or motivation. It tells of "the world that's coming", a science-fiction future ruled by the Global Peace Corps, a sort of uber-UN. The Global Peace Corps is "non-partisan" and "represents every nation"; accordingly (?) its agents wear identical uniforms and faceless orange masks to hide their features. Since "large armies are outlawed", the Corps relies on one man to enforce the peace -- a super-soldier who can serve as a "one-man army corps", or OMAC for short.

Although the nominal hero of the series, OMAC is barely-there as a character. He starts the series as the aptly named Buddy Blank, a weedy nebbish straight out of alter-ego central casting, transformed by "a computer hormone operation ... done by remote control!!" into the super-human OMAC. He takes this transformation in his stride and goes along with whatever missions the Corps sends him on, without asking any questions or, indeed, showing any sort of character beyond what is required to carry the action forward. The only distinctive thing about the character is his thick black mohawk.

Well, I guess his ever-lovin' sidekick, Brother Eye is pretty distinctive, too. I mean, he (?) is a computerized satellite, floating in the Earth's orbit, that looks like a giant eyeball and helps OMAC out by sending him power-boosting beams, whenever and however required by the plot.

I gather that DC recently revamped the concept of OMAC as a sinister army of cyborgs, with Brother Eye their Orwellian overlord. Truth be told, turning them into bad guys isn't much of a stretch; they already seem like bad guys, even if Kirby doesn't seem to realise it. The Global Peace Corps, OMAC's employers, look like the sort of faceless, nameless organization that Kirby created at Marvel as super-villain cannon fodder -- think of HYDRA or A.I.M.. And the Sauron-esque Brother Eye, hovering above us and seeing all, is downright creepy. Kirby's OMAC reads like the propaganda comic that Big Brother might have commissioned in 1984, to convince us that war is peace (and I say this as a fully-fledged, wants-to-take-your-guns-away, UN-loving internationalist who would probably support the Global Peace Corps in real life).

If Kirby's writing got less human in the 70s, then his art developed (some might say "degenerated") in that direction, too. More explosions! More action! In every single panel! And OMAC doesn't disappoint on that front. Kirby's figure art in the 70s was often stocky, figures drawn short and squat; with OMAC himself this tendency is exaggerated by the need to squeeze his mohawk into the panel.

Also on display is the Kirby squiggle that came to dominate his 70s style. Every surface -- organic, artificial and, above all, sartorial -- is decorated with those ubiquitous squiggly black splotches. The effect is disorienting; this isn't just the future, it's an alternate visual reality, the world through alien eyes. Just as no one in OMAC behaves like a real person, nothing in OMAC looks like the real world either. The squiggles make the world a battleground, everything, everywhere, ever-ready to burst forth in combat.**

This abstraction culminates in an amazing final two pages. The series was, apparently, cancelled abruptly, and the story certainly doesn't provide a satisfying resolution. But those last two pages are a fitting visual testament to what Kirby was doing in OMAC. Only the first two panels contain a human figure, the villainous Dr Skuba who is battling OMAC and his ally, Brother Eye. The rest, well, since I don't have a scanner, I'll have to let Kirby's own panel captions describe how he ended this strange and unworldly series. This isn't really a SPOILER as such, but the sensitive might want to skip past the bolded text:

Meteors and space debris are diverted in flight and flung at Brother Eye!

The huge satellite is subjected to a murderous bombardment...

Swarms of space rock gather and fly in a continuous rain!

Brother Eye has become a gigantic magnet which is attracting its own destruction!

The satellite is soon covered by crushing rock! It is blind and fighting to survive...

Suddenly, a beam of solar intensity roars out from Earth -- it heats the stones which cover Brother Eye ...

What was space rock becomes a molten, seething, fiery mass ...

It finally cools ... Brother Eye is now helpless and silent, in a prison of slag...

But below, the effort has caused an overload in Dr. Skuba's equipment. The island explodes in a gigantic fireball... ...and his very success brings destruction to the evil Skuba!

Now, that's about as pure an expression of Kirby's 70s inhumanism as you could get: rocks clash into a machine floating in space, and then there's an explosion. The end. OMAC himself, our supposed human hero, is nowhere in sight. Like the series itself, the ending is forbidding, abstract and nearly inaccessible.

In OMAC, Kirby no longer saw the world as made up of people and things, some placed here, some placed there. Instead, he saw a world of energy, savage, crackling, rippling and, above all, alien. If aliens read comic books, OMAC is the book they'd read.

As for humans? To quote the King himself: don't ask! Just buy it!

* For what it's worth, I found Yokoyama's visual style too flat and banal to really maintain my interest. But, as the Bard said, your mileage may vary.

** h/t to Craig Fischer for the phrase "Kirby squiggle". His post here first got me thinking about the inhuman in Kirby.
Posted by Unknown at 12:00 PM