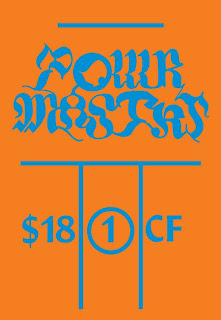 I’ve never really been into the Fort Thunder style of comics; every sample I’ve seen of any of those books has really unappealing artwork, almost celebrating in its tossed-off crudity. It might be that I just don’t get it, or I need to read more of it to really understand what the creators are going for, but I haven’t felt the need to delve into them too much, if only because there’s so much other comics work out there keeping my attention. But when I found the first volume of Powr Mastrs at the library, I grabbed it. It sure got a lot of acclaim last year, and I had heard that it was an attempt to build a fantasy world and tell an actual story, so maybe it wouldn’t be too bad.

The verdict? Well, I didn’t hate it, but the art style is still kind of a turn-off; it usually looks like something decorating many a high-school Tolkien nerd’s notebook. At times, CF transcends his style and achieves some pretty cool, trippy visuals, and the occasions when he fills in the dense backgrounds of a magical forest are lovely in their lush detail, but the majority of the book is pretty uninspiring. So the remaining appeal has to come from the writing, which is interesting, but suffers from a lack of much of a plot. Maybe something will develop in future volumes, but right now all we’ve got is a collection of character vignettes introducing us to the odd beings populating CF’s world.

They’re mostly an interesting bunch, and CF does a good job of linking them Robert Altman-style in a way that demonstrates the breadth of his world. And they’re weird as all get-out, including witches, magicians, talking animals, immortal elves, wordplay-loving submariners, and (in a shockingly explicit scene which seems like it usually gets excerpted in reviews, but I can't find any examples at the moment) a jellyfish-fucking princess. Little of this makes much sense at first, but as you read, you actually start to gain an understanding of this crazy place. The problem is, without a hook to draw me back in, I don’t really feel like I have any need to come back to it.

There are some neat ideas and striking scenes though, like a “beard party”, in which immortal beings feign aging in an attempt to experience what it might be like to be old. Or a man trapped by a magician in a memory-torture hole, forced to replay his memories and learn what he did wrong (and driven insane by the experience). Or a description of Mosfet the warlock’s magical exploits, culminating in dead flesh revived as living metal. And did I mention that jellyfish-fucking scene?

So, I dunno, it’s a weird book with some interesting stuff here and there, but I’m glad I didn’t spend eighteen dollars to read it. Should I bother with the next installment? I guess I’ll keep an eye out at the library…
Posted by Unknown at 12:00 PM