So I just watched the recent remake of Funny Games (never seen the original), and it was a pretty good movie, although I gotta say, if I hadn't heard all about how the movie was such a condemnation of violence on film, implicating the viewers as accessories to murder, I probably wouldn't have taken that away from the film. It was more of a horror-thriller with some postmodern elements. Am I just bad at interpreting this sort of thing? When Michael Pitt (who is awesome in the movie, by the way) speaks to the camera, he isn't asking viewers to cheer him on in his acts of sadism, he's gloating, even inviting sympathy for his victims. I dunno, maybe the case is just that Michael Haneke can make a hell of a thriller, even when he's trying to make it seem like a bad thing. I kind of dug it.

Okay, I've got some stuff going up that I read on vacation, but there's plenty more to cover, including these, which I finished before I left: 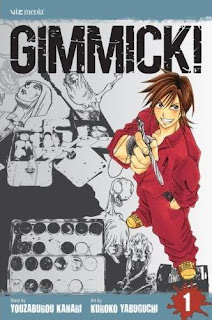 So this is one of those manga where the protagonist is impossibly skilled at some obscure (or at least seemingly non-comics-friendly) activity, which he uses to help people out and astonish competitors. In this case, it's movie makeup, prosthetics, and special effects. That's right, young Kohei can whip up amazing bits of deception using his "sacred silver spatula", that weird doohickey he's wielding on the cover. There's probably a story behind that thing, but we don't learn it in this volume; instead, we see Kohei do things like help an actress avoid her evil manager, cover up the disfiguring scar on a model who got into a car accident, or stop a disgruntled employee who is intent on ruining a horror movie-themed amusement park.

It's diverting enough, but there's nothing too exemplary about any of it. Kohei is a pretty typical hero for this sort of story, from his boundless enthusiasm, to his ability to pull tricks out of his ass at the last minute, even to his rampant horniness. The art is slick and easy-to-follow, with plenty of cheesecake to draw in the boys' interest when the story might be flagging. But I dunno, maybe I like a bit more unpredictability in my comics; when Kohei is guaranteed to come out on top no matter what, the only interest is seeing what kind of silliness he'll use to do so.

Those victories can be pretty amusing though, with other characters amazed at his skills, goggling at how he produces such lifelike effects so quickly. And being a movie buff, I like how he references movies when doing his work, complaining about how The Evil Dead ruined horror makeup, making it all about blood and gore rather than lovable monsters with personality. Or using the same effects that were used for James Caan's death scene in The Godfather. And who knows, maybe things get more interesting in future volumes; this book ends with a cliffhanger that departs from the "Kohei always wins" formula in a surprisingly striking manner.

So maybe this series might deepen, but for now it's a fairly entertaining diversion, with little to distinguish it besides an offbeat subject. But if you love makeup, by all means, go for it.
----- 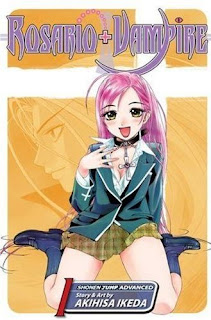 So here's how you know when you're reading a shonen manga (or, if I've got my categories slightly off, a manga aimed at pubescent boys): when there's a sound effect for bouncing breasts (in this case, it's "GOOSH GOOSH"). Those Japanese sure are shameless, aren't they? Anyway, the story here is that average student Tsukune fails all his high school entrance exams, but he manages to get accepted to a private school called Yokai Academy. He should have been ready for strangeness though, because that would be like going to an American school called Monster High. Sure enough, it turns out that the school is for monsters, with the goal of teaching them to live among humans unnoticed. Dangerous!

Immediately after arriving at the school, Tsukune meets up with Moka, a vampire girl who takes a liking to him because his blood is so delicious. After learning the true nature of the school, he tries to leave, but Moka likes him, so she convinces him to stay. And even in that first chapter, a formula is established, as we learn that Moka transforms into a powerful form when her cross necklace, or "rosario", is removed, and also that she can't take it off herself. So some other monster ends up threatening Tsukune, prompting him to remove her necklace so she can lay the smack down. There's your typical plot for a chapter; you shouldn't have to worry about venturing too far from that template.

There are a few other wrinkles established over the course of the volume, including the introduction of Kurumu, another girl who acts as a friend to Tsukune and a rival to Moka, and the cast joining the school newspaper club, which will probably provide starters for plenty of future plots. But for now, it's typical high school wackiness, with plenty of fan service (one chapter sees Tsukune almost join the swimming club, providing plenty of opportunities to show girls in tiny bikinis) and some decent action. It's nothing too special, but not anything terrible either. Like Gimmick!, it's divertingly entertaining, but not something I would shove into anybody's hands.

I did notice one oddity though, in that Moka, being the main love interest, has to remain kind of virginal; while she wears the same short-skirted, panty-revealing uniform as the other girls, her naughty bits are always chastely covered by her extra-long hair, or shadows, or something. And her breasts don't bounce around all over the place either. That doesn't stop Tsukune from glimpsing plenty of other girls' panties or having their breasts shoved into his face though, so you don't have to worry about his hormonal development. I dunno, maybe this is typical for female leads in this sort of manga, but I found it weird that Ikeda would go to the trouble of preserving one character's dignity while removing it from so many others.

As a post-script, while I probably wouldn't normally bother to read future volumes of the series, I just received a review copy of volume 2, so I'll let you know if anything changes past the initial installment.

These reviews were based on complimentary copies provided by the publisher.
Posted by Unknown at 4:08 PM