Here's another piece from Jason Powell: 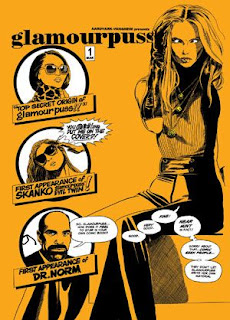 When Paul O'Brien used to do a monthly capsule review for every issue of Cerebus during the series' last two or three years of existence, he acknowledged every so often that writer/artist Dave Sim's artistic predilections and obsessions had become so rarefied that the series was now more or less for "completists only."

Alas, the same complaint is probably true of "Glamourpuss," Dave Sim's new series, only more so. Whereas Cerebus contained -- even during some of its most opaque and impenetrable phases of existence -- on ongoing narrative that always was engaging enough to take readers over the rough spots. The sheer momentum and sweep of Sim's storytelling remained even though Cerebus' turbulent final years.

Glamourpuss doesn't have that momentum stored up; nor does it have any kind of coherent narrative. It's a hard sell, by any standard.

What it does have is 20 pages of gorgeous artwork by Dave Sim. That is probably not enough to attract most of the comics-buying audience, but I'm happy to acknowledge that it's enough for me. Sim is truly a master of comic book art. Cerebus will always stand as his masterwork, a series that -- over its 26 years of existence -- boasted innovative storytelling techniques that were so often ahead of their time.

Glamourpuss, by contrast, is more backward looking. It is less about breaking new ground and more about exploring some of the previous generation's pioneers of comics art. Since Sim himself is a pioneer of this generation (I'd even say he's on the top of the heap, the greatest visual innovator of his day), what better person to guide readers through the work of his precursors?
True, it's a little bit stream-of-consciousness in its delivery; it's somewhat scattered and unsteady as it tilts back and forth among critique and personal rumination. Sim also wraps his entire tutorial in a gloss of fashion-magazine parody. It's far from the refined, focused writing that characterized Cerebus at its peak.

Yet, at the same time, there is an attractive kind of dreamy logic to it all. "Self-indulgent" is often used as a pejorative, but certain artists are just so fascinatingly idiosyncratic that -- in my opinion -- they become more entrancing the more self-indulgent they get. Sim falls into that category. Glamourpuss is Sim indulging his own fascinations to the Nth degree -- the entire thing feels like an uncensored, undiluted, unapologetic first draft. And while it's certainly a strange amalgam (glamour magazine meets comics-art tutorial?), Sim's sense of purpose is so strong, and his artistic talents so monumental, that it hangs together quite well. There is no logical reason why it should, but it does, thanks to Sim's sheer visual genius.

Also, while his writing can be a bit fussy, I have to say I still think Sim's sense of humor has got some real chops. I recall reading a bit somewhere in which Sim lamented critics who slammed Cerebus when it "stopped being funny." Glamourpuss showcases Sim's biting sense of humor as well as some of Cerebus' best comedic moments. His "Skanko" bit at the end -- basically an advice column encouraging women to behave like sitcom caricatures -- is a fantastic send-up of pop culture's pervasively brainless gender politics. (Ironic, considering that Sim's own have come under major fire for years.)

Glamourpuss also features some extended, Andy-Kaufman-esque conceptual bits; not as biting as the "Skanko" parody, but compellingly bizarre in their own right.

The whole package is probably too bizarre to appeal to most, but I'd still encourage people to check out the first issue anyway. Many may find it incredibly inaccessible -- but a few might, in spite of themselves, become hooked. I certainly have.
Posted by Unknown at 12:00 PM