Parasyte: I hope it doesn't become one on my pocketbook 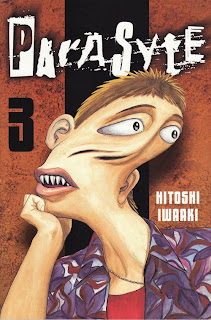 So is this kind of a filler volume for the alien-arm series? Sure, there’s at least one cool fight, but the plot doesn’t rush forward as quickly as the first volume, and it’s not as deliciously formula-altering as the second. No, instead it sees a bit of a return to the goofy comedy (and attendant awkward character art) of the first volume, and only a little exploration of the changes that I found so fascinating the last time around. It ended up being somewhat disappointing, but there were still enough moments of interesting boundary pushing that I feel like I'm going to continue to buy it.

I think mostly I like that Iwaaki continues to explore how the eponymous alien parasites work, what different variations on their normal head-replacing modus operandi he can come up with, what their actual purpose is on earth, how humans react to them, and how Shin, our heroic student who might be bonding a little too closely with his own parasite, will relate to them, as well as to the changes going on in his own body.

There are certainly some interesting developments going on, like the Japanese government becoming aware of the alien menace lurking within the populace and trying to figure out what to do about it, or the continuing threat of the female parasite from volume one, who seems to want to test Shin and Migi and learn their capabilities. But the big plot here involves another parasite who poses as a student named Shimada and joins the student body of Shin's school, trying to form some sort of actual friendship with him. Or maybe he's just trying to get close enough for the kill. It makes for an interesting cat-and-mouse game though, and the big, violent finale is pretty awesome. In fact, it's probably the goriest bit of nastiness in the series so far, and it's pretty shocking, even when you're used to monsters slicing off heads like they've been doing for three volumes now.

I'm also liking Shin's continuing character development, as we see him start to lose his humanity while barely even realizing it. There's a great moment early on in which he finds a dog that had been hit by a car and is lying in the middle of the road, dying. He picks it up and holds it while it takes its last breaths, which impresses Murano, his love interest, but as soon as it's dead, he chucks it in a nearby trash can, and when Murano protests, he replies that it's dead, and no longer a dog, just "meat in the shape of a dog." Surprisingly, Migi is the one who questions him on this, saying it sounded like something an inhuman parasite like himself would say. While not even realizing it, Shin is becoming more and more like Migi (and as much as he protests, it seems Migi might be gaining a little bit of humanity). It's moments like this that make the series interesting outside of the action scenes.

Unfortunately, these character bits are often accompanied by some poor character art, and awful "humorous" expressions: 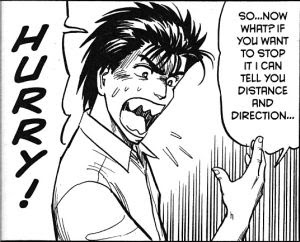 But this weakness becomes a strength when depicting the alien Shimada, who just looks wrong: 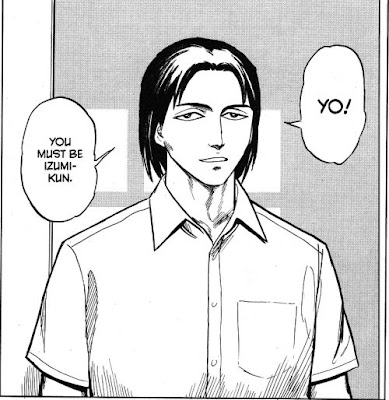 It's mostly the eyes, which are either drawn to look like he's got a lazy eye, or are just too far apart. And his weird lack of expression is certainly offputting; Iwaaki really makes him creepy, even before we see him kill anybody. The awkwardness is also effective when we see Shin's "feral" face, which emphasizes his fading humanity: 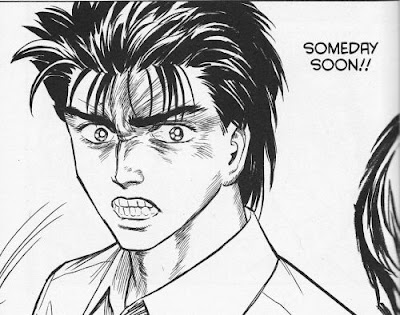 That's pretty creepy, and I'm sure it's at least half-intentional.

But while he can be awkward with the character stuff, Iwaaki shines when depicting action and freaky monsters. In the climactic action at the end of the volume, a parasite gets wounded and can't shapeshift properly, and Iwaaki makes it look even more weird-looking and gross than these things normally are: 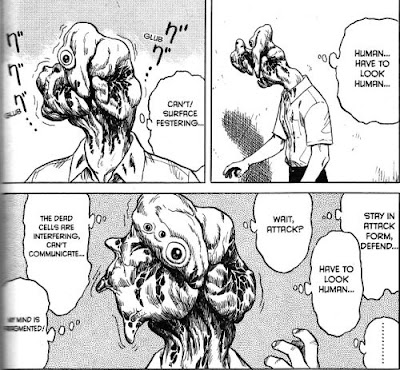 And while I'll avoid spoiling any of the excellent violence, there was one moment that I liked a lot: 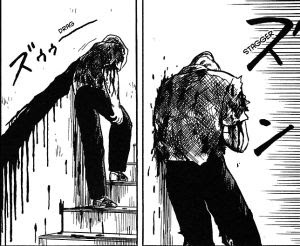 I love that use of blood smears to indicate a character being wounded when it shows up in movies, and Iwaaki replicates the motif perfectly. Nicely done.

So, yeah, I wouldn't call this volume a failure or anything, but if it represents what we can expect for the remainder of the series, I don't see myself following it for much longer. The series is at its best when exploring the ideas of the parasitical invasion and going crazy with the action and gore. There wasn't enough of either of those in this volume, and too much of the lame attempts at comedy. More character development (or drama) and less silliness, please. And maybe bring back that guy with the parasite chin; he was funny.
Posted by Unknown at 9:07 PM