Still working through the absentee stuff... 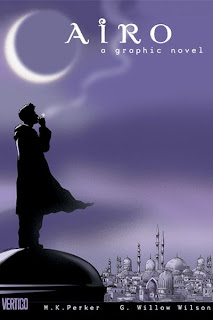 I never read this when it came out, first because it seemed a little pricey ($25 for a black and white hardcover, although it does seem to be a bit longer than other Vertigo graphic novels), and reviews were middling at best. And having read it, that opinion kind of holds up, although it is an interesting work, if nothing else. The story involves a diverse group of characters adventuring in the titular city. There’s a drug runner, a female Israeli soldier stuck in dangerous foreign territory, a bleeding-heart journalist, an American girl who is trying to break out of her safe and familiar environs, and a Lebanese-American boy who is planning to do something foolhardy when he gets back to his homeland. They all end up crossing paths after Ashraf, the drug runner, sells a hookah that he stole from a crime lord to Shaheed, the Lebanese kid. The hookah turns out to hold a genie (or jinn, to be more proper) who is trying to recover a magical item from Nar, the aforementioned bad guy. They end up all getting mixed up in danger after Ali, the journalist, and Kate, the American girl, get kidnapped by the bad guy until Ashraf (whose sister is in love with Ali) recovers the hookah. Meanwhile, Shams, the jinn, sees potential for greatness in Shaheed and begins training him and trying to steer him away from the choices he is about to make.

It’s all interesting enough, and there are some crazy magical adventures, but it seems especially Vertigo-ish, with fantastical stuff mixing with the mundane world in a way that is both unrealistic and too realistic. If you’ve read some of the various Sandman spinoffs, you probably know what I mean; the stuff involving the mundane world is either more interesting than the magical stuff (I found some of the political discussions and character relationships more worthy of page time than the fantastical conflict), or it drags down the magic and makes it seem boring. And while it gets tiring when stories like this are full of people reeling in disbelief at all the craziness going on, it also seems odd when they accept it too easily, which is the case for most of the story here. It’s tricky to get the balance just right, and while somebody like Neil Gaiman is an expert at that sort of thing, Wilson doesn’t quite manage here.

There’s some other decent character stuff, but there’s also some really clunky exposition to set it up. When Kate meets Ali, she realizes who he is and tells him that she reads his column, but that it’s “cynical and overwritten”. It’s a really awkward scene, but it sets up some interesting discussion later about her attitudes toward the situation in his country as a privileged American and his reluctance to move outside his area of comfort. And this all gets amplified when they are attacked by a demon who sets them against each other and causes them to despair. It’s interesting stuff, if still occasionally awkward.

Also interesting are Shaheed’s adventures with Shams. The discussion of Shaheed’s destiny is handled much more subtly than the Kate/Ali scenes, making them more poignant. And he ends up meeting some crazy creatures and doing other weird stuff; I especially liked a scene in which he was able to use magical powers to peel back the fourth wall. And there are some good, freaky creatures, like a man with snakes wrapped around him, or a demon with faces on every surface.

And then there’s the ending, in which all the characters band together to face an evil magician and rescue Shams. It’s supposed to be a big, dramatic, exciting moment, but I found it to be a bit silly. Maybe it was just too much of an action movie cliché. I also wasn’t a fan of the explanation of the mystical artifact that they saved; either Wilson didn’t explain it very well, or it’s just not a concept that really makes sense.

On the art side, M.K. Perker does draw some pretty nice pictures, although characters occasionally look kind of awkward and stiff, and faces have some odd qualities. Lips often seem to stand out in front of faces; it’s very distracting. But there is also some really nice background work, bringing the exotic setting to life, and those weird demons and monsters are rather creepy and cool. The action sometimes works; at it’s best, the gestures really come to life and look real, especially in the way clothing drapes over moving bodies. And I think Perker does manage to pull off the combination of mundane and fantastical that Wilson is going for. Whether that works as a whole will probably vary depending on reader, but Perker definitely does the job asked.

So overall, I think those middling reviews were pretty much on target. There’s certainly some good stuff in here, but other elements are awkward, and the basic premise doesn’t quite cohere over the course of the book. I’m glad I grabbed this at the library instead of shelling out some cash. But Wilson and Perker are talents to watch; perhaps their upcoming Vertigo series Air will see the refinement of their skills into something that’s not to miss. The preview that was in a recent issue of House of Mystery didn’t give me too much hope, but you never know…
Posted by Unknown at 12:00 PM