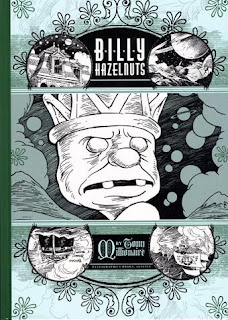 Man, oh man, Tony Millionaire is one weird dude. Or so it seems, judging by the comics he makes. I can barely even keep up with this one, which involves a boy (man?) who was constructed by rats out of garbage to fight the mean lady in the house they infest. They put flies in his eye sockets, which makes him especially mean. He gets taken under the wing of Becky, the lady’s science-minded daughter, and she replaces the flies with hazelnuts and christens him “Billy Hazelnuts”. Because why not? This doesn’t make any sense? Well, fuck you, says Tony Millionaire, because next thing you know, Billy and Becky are off on adventures involving a garbage dump for broken planets and some robotic bird pirates which were constructed by Becky’s shunned paramour Eugene and sent on the attack in a bat-winged ship with mechanical arms and legs. And you can imagine where it goes from there.

Okay, no, you probably can’t, and that’s what makes Millionaire so interesting. I don’t even know if he knows what’s going to happen when he starts one of these books, because it seems like stream-of-consciousness storytelling, with batshit-crazy stuff just happening, every other page or so. It’s all so ridiculously bizarre, but it works, because the characters just go along with it, like it’s all completely natural in their weird, weird world. I don’t really understand it, but goddamn if it isn’t entertaining.

That probably comes from the energy that Millionaire puts into the work, filling every page with tactile texture that makes the world seem lived-in and, well, not really realistic, but believable, in its own way. And I love the crazy dialogue, especially when Billy goes nuts and starts committing acts of violence and screaming things like “Watch out for me! I’m a rustic Dan’l Boone! I kil’t a b’ar with a booey knife!” That’s pure gold.

So, yeah, I dug the book, even though I have trouble describing it or explaining what’s so great about it. All I can say is that Tony Millionaire is awesome, and probably deranged.
Posted by Unknown at 12:00 PM