Scott Cederlund is a comics blogger that I actually know offline, so I have a face and voice to go with the stuff he writes. His blog, Wednesday's Haul, features commentary on comics and other media, along with a regular podcast. He also writes for Popsyndicate.com. His contribution makes me think I really need to check out Jeff Lemire's comics:

Jeff Lemire's two Essex County graphic novels have been haunting books, showing how we can be disconnected from the very people we should love and cherish. They're powerful but ultimately depressing reads that show the gulfs that can exist between brothers or between people who should be as close as father and son. It won't be until October when we see Lemire's third part of his trilogy, The Country Nurse, but as a treat, he's recently put out two minicomics taking place in Essex County-- The Essex County Boxing Club and Eddie Elephant Ears.

Eddie Elephant Ears introduces us to Eddie, another of the many residents of Essex County. He has only four memories-- collecting beer bottles, enjoying maple leaf cookies, reading a series of choose-your-own-adventure books and going on an ice-fishing trip with his father. There are reasons it's only four but we'll avoid those spoilers for the review. 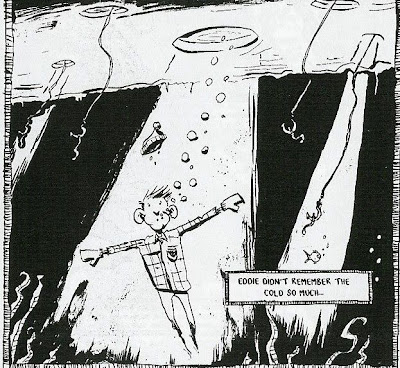 The second mini, The Essex County Boxing Club tells of the rise and fall of the club, how success was achieved and then lost, and how at the end of the day, it was more about friendship than boxing. Two life-long friends, Punchin' Patty Papineau and Ted "Thunderpunch" Diemer, started the club in 1976 as a way for manly men to have something to do with their time. It was comprised of a group of farmers who boxed at small town festivals. They even donned costumes, took on silly names and performed for a lot of people, including many of their own "beer-sogged friends, family and co-workers." Along the way, one died and the other lost his way but in the end, the boxing club survived and gave Papineau the outlet to remember and honor his friend. 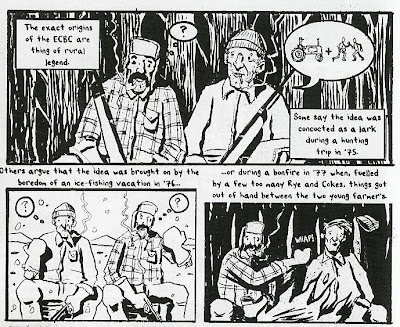 These two minicomics don't tie in directly with the graphic novels but provide some enjoyable color to the background of Essex County and its citizens. Like the graphic novels, both show the distinct loss and disconnect of their main characters but they both end on an up beat as they end up being the story of the gift of memory. Eddie, facing a loss of memory and more, is able to hold onto his four memories and cherish them. Punchin' Patty's story is a similar one as memories enable Patty to continue the club and continue to box even after the loss of his dear friend. 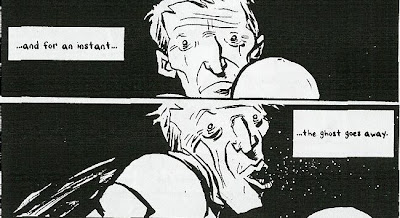 Since Tales From The Farm, Lemire's artwork has amazed me. Maybe unfairly to an entire Canadian county, his characters have become what I imagine all Essex citizens look like in real life. From their misshapen heads to their flabby bodies, Lemire characters could only be indigenous to a farm land that's always trapped in some kind of perpetual autumn (at least, that's when I imagine most of Lemire's stories taking place.) They happen in a small little pocket of Ontario, CA where a boxing club can exist or where two brothers will fight and argue until their last days (see his Ghost Stories for that story.)

His characters all have one characteristic that they share-- their walking through life on their way to death. Through a wonderful blending of art and story, you're always aware of these characters mortality. That may sound morbid and depressing but the sense of mortality acts more as a memento mori for the readers as we see Lemire's characters fail at life in ways that, from the outside, are obvious and avoidable. But if you put yourself in the characters' place, you can understand the characters' weaknesses and blindness to the obvious pitfalls of life around them. And in these minis, more than in the graphic novels, Lemire projects memory as a good and positive thing that helps us move ahead even after tragedy.

These two minicomics aren't essential reading if you're following the Essex County series but they are fun side-tracks until we get The Country Nurse. They contain the themes and emotions of the graphic novels condensed down into 16 page minicomics. You can purchase the minicomics through Lemire's online store, http://www.jefflemire.com/store.htm.
Posted by Unknown at 12:00 PM