Drifting Classroom: In which we learn the origin behind all the screaming

Manga Blitz part 3 (which will be the last one for at least a few days; I got sidetracked in my reading when this week's comics showed up): 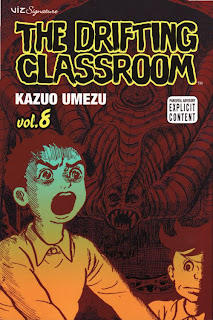 By this point in Kazuo Umezu's super-crazy series about kids stranded in a post-apocalyptic wasteland, everybody might be suffering from fatigue, including the characters, the readers, and even Umezu himself. At least, that would explain why this is possibly the weakest volume so far (which is not to say that it's actually bad or anything). Or maybe my thought processes have been warped enough by the insanity that I require an escalation each time around and feel some withdrawal when Umezu doesn't deliver it.

But even though the level of craziness is slightly below expectations, there's still plenty of insanity to be had. As we saw last volume, the only surviving adult, the evil Sekiya, had taken over the school, and he immediately sets to accusing Sho of somehow causing the whole catastrophe, getting some students to accuse him: 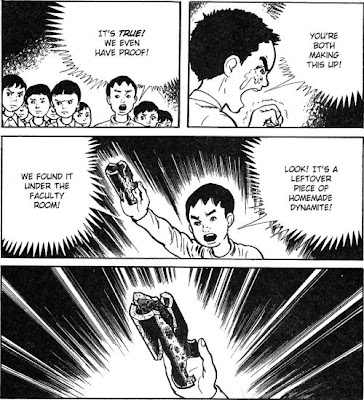 That doesn't really make any sense, but what does on this series? Maybe Umezu is going to retcon in some tragedy, giving Sho the guilt of causing everyone's troubles and the motivation to lead them to survive as best he can. Or maybe it's a throwaway detail that doesn't mean anything.

Anyway, Sho and his pals end up being confined to a deep hole in the ground and told to dig a well, but they end up finding a tunnel that leads to a subway system, where they find a working train car (!) and stumble across a society of monsters that seem to have mutated from humans (it's likely, since the kids who ate the mushrooms last volume are starting to look like them). They end up witnessing a film strip that the monsters show (using an old school projector, powered by who knows what) that gives a possible explanation for the end of the world. It's a full-on environmental fable, with the polluting humans causing climate change that turns the entire planet into a desert: 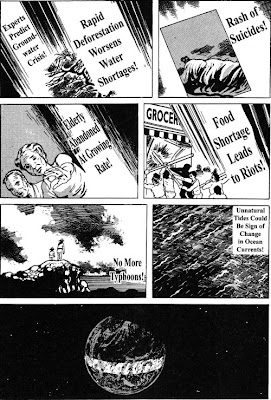 There are some interesting bits about humanity's rejection of nature in favor of facsimiles thereof as they isolated themselves itself in cities. It was probably a pretty resonant point in 1960s Japan, as the population became increasingly dense and concentrated in big cities like Tokyo. It makes for a good explanation of the apocalyptic environment, but I like the ambiguity that comes when the monsters (who speak Japanese, but only as a formality, since they communicate telepathically) state that they don't know if the film is a documentation of reality or a work of fiction.

The whole thing is kind of a decrease in energy, but luckily things get exciting again when the kids have to escape from the mutants: 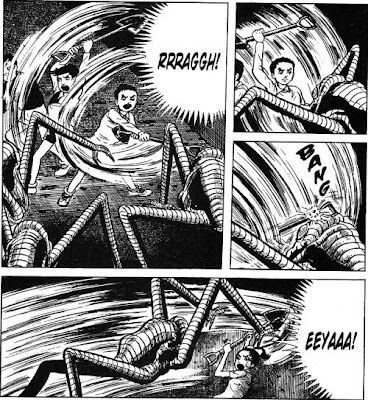 In another resonant bit, the half-mutated students come to their aid, showing that they haven't completely lost their humanity. It's a nicely emotional scene, as these children who seemed lost manage to dredge up some feeling for their fellow students and choose the right path, instead of embracing the dark side of conformity. Who knows if we'll ever see them again, or if they're destined to disappear, half mutated and torn to pieces in a barren future.

As Sho and his gang escape, they end up discovering some more crazy shit, including a pile of mummified bodies and what might be the last surviving human, along with a pool of water that seems like a blessing, until it turns into a vent for a volcanic eruption. The kids have to escape from underground before they're trapped, leading to awesome scenes like this: 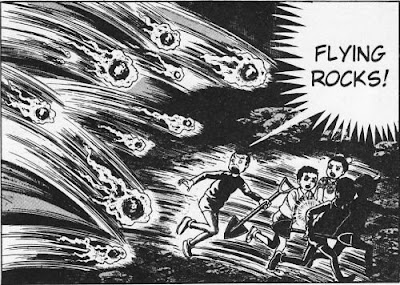 Or pseudo-scientific (or childlike, to be more apt) explanations of the happenings: 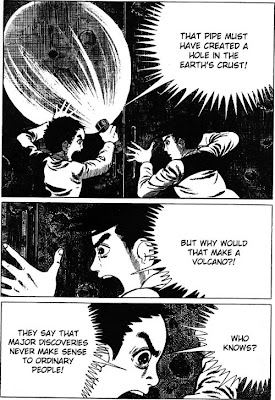 Or even this bit, in which one of them gets blown out of a tunnel by a sonic shock wave: 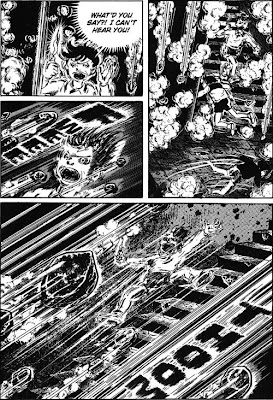 Damn, I love that kind of thing. While this volume seems a bit less intense, Umezu can still surprise with some crazy shit. I also love the "rumble" effect he uses on the characters, as if they're vibrating so fast we can't see them clearly. He does some other cool artistic stuff, like the rippling pools of light created by Sho's flashlight: 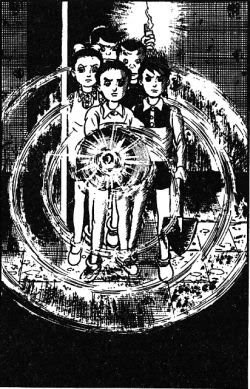 So while it's not my favorite volume of the series, it's still pretty damn good. I'm especially intrigued by the way the conflict between Sho and his friend Otomo is coming to a head, with the two of them ready to kill each other. That's a fight to the death to look forward to in the next volume, along with whatever other batshit nuttiness Umezu can deliver. I can't wait to find out what he's got in store.
Posted by Unknown at 7:49 PM