David Welsh is one of the preeminent manga critics around the comics blog-o-tubes, regularly posting to his blog, Precocious Curmudgeon, and contributing a weekly column to The Comics Reporter. I'm pleased to present his guest contribution to my plea for content:

Surrender to the Pink

I’m always heartened to see other old people express affection for shôjo manga. (By “old people” I mean anyone above the age of twelve not found decamped on the floor of Barnes & Noble.) So Matthew’s regular strolls through the pages of Viz’s Shojo Beat magazine are always highlights of my visits to this blog. While there’s a lot of fine shôjo currently in release, there are plenty of completed series that are worth a look. Here are four you might have missed: 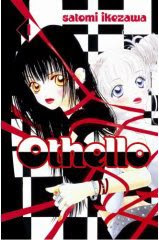 Othello, by Satomi Ikezawa, seven volumes from Del Rey: Poor Yaya. All she wanted was a high-school experience away from the awful bitches who’ve used and abused her since kindergarten. Alas, the sadistic gods of classroom assignments have different ideas. While I wouldn’t normally recommend a complete psychotic break as a coping mechanism, it works out pretty well for Yaya when a two-fisted alternate personality, Nana, emerges. A lot of my favorite shôjo series are about the evolution of identity, and this one stands out by focusing on the reconciliation of extremes. There’s real angst in watching doormat Yaya try to figure out what’s going on, and Nana has her own problems. Nana’s extreme measures are often out of proportion to the situation, which Ikezawa smartly portrays as being just as bad as Yaya’s passivity. With plenty of twists and turns along the way, the pace never flags. 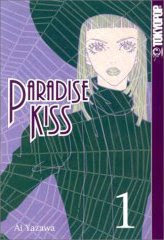 Paradise Kiss, by Ai Yazawa, five volumes from Tokyopop: One of the things I’ve never understood is why Tokyopop hasn’t released a handsome omnibus edition of this series with a great big “From the creator of Nana!” blurb on the front. Aside from the marketing possibilities, this gorgeous story deserves the prestige treatment. Gawky, uptight Yukari meets a group of fashion design students from an arts high school who want her to model for them in an upcoming show. College entrance exams go by the wayside as she’s drawn into their glamorous, creative circle. The art is predictably gorgeous, and every character is great, from serenly beautiful Isabella to snarky punk Arashi to hot-but-smug bisexual George. The book’s primary pleasure is watching Yukari evolve from a tight-ass on an unsatisfying treadmill to a funny, generous young woman who’s open to life’s possibilities. 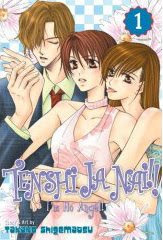 Tenshi Ja Nai!!, by Takako Shigematsu, eight volumes from Go! Comi: After some nasty bullying following an early experience as a child actress, sullen Hikaru has devoted her adolescence to not being noticed. Her hunger for anonymity is thwarted when she enrolls in a boarding school and is forced to room with up-and-coming starlet Izumi. Beyond the unwanted attention that yields, Izumi’s got a secret: she’s a he, and a conniving bastard to boot. He blackmails Hikaru into helping him keep his secret, and satisfyingly nasty screwball complications ensue. The edge wanes as the series progresses, and it’s by no means perfect, but there’s an awful lot to like overall. The chemistry between Hikaru and Izumi is particularly satisfying and stays strong as their characters evolve, and their comedic mishaps work far more often than not. 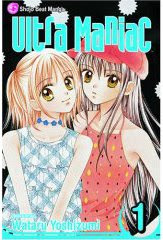 Ultra Maniac, by Wataru Yoshizumi, five volumes from Viz: It’s fair to be a little frightened of the sparkly adorability of Ultra Maniac. With its vending-machine ready magical accessories and determined sheen of cuteness, it looks utterly, cynically disposable. I assure you that it’s not, as there’s a surprising amount of heart invested in its formulaic set-up. Athletic, intelligent Ayu is poised to have a junior-high social career of dignified popularity. This becomes impossible when she befriends dingy Nina, an underachieving exchange student from a magical dimension. Nina is devoted to Ayu and tries to help her new friend by magical means, which always ends in humiliating disaster. The antics aren’t particularly inspired, but the unlikely but enduring friendship that forms between Nina and Ayu is. In a lot of shôjo manga, romantic relationships are the main course and friendships are the neglected side dish, but the opposite is true here, and it’s really refreshing. The girls’ Lucy-and-Ethel shenanigans may not generate much interest, but their Mary-and-Rhoda loyalty provides a smart, solid core for the series.
Posted by Unknown at 12:00 PM