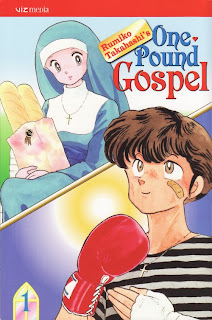 Surprisingly, I don't think I've read anything by Rumiko Takahashi before this, although I've seen snippets of the anime versions of Ranma 1/2 and Inuyasha, and I have a bunch of the old pamphlet-format issues of Maison Ikkoku sitting around unread. I don't know what's taken me so long, but there's nothing like a good series that I was previously unaware of to kick-start my interest.

And this one, originally published in 1989, is an excellent example, detailing the travails of Kosaku Hatanaka, a cheerful young boxer who is talented but undisciplined, always struggling to control his raging hunger and stay in his weight class. After a string of defeats caused by him having to resort to laxatives to stay in the target weight, his always-exasperated coach is ready to give up on him, but Sister Angela, a nun at the local Catholic church, has taken a liking to him and encourages him to stick to his regimen and succeed.

The grasp of Catholicism seems a bit shaky, since I don't think nuns take confession, and it amuses me that Angela prays so hard for Kosaku to succeed, as if boxing matches are a big priority for God. But their relationship is quite charming, with Kosaku attracted to her inappropriately: 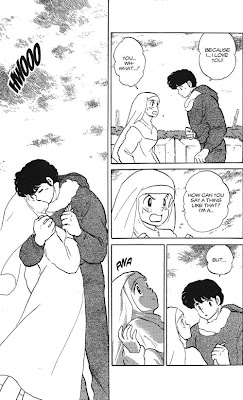 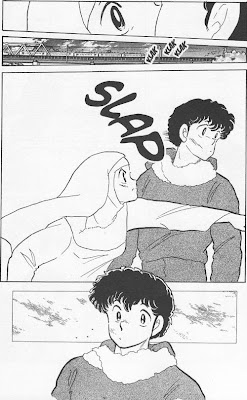 Oh boy, you could see that coming. Kissing a nun is never a good idea (at least, not this early in the series). But she can't help wanting him to succeed, alternately encouraging him and screaming at him from ringside:

She's actually a bit more interesting of a character (at least so far), since he's mostly just one of those always-cheerful manga protagonists who never gives up, while she struggles with the conflict between her faith and her attraction to him. In one of the best scenes of the book, she goes out drinking with some fellow nuns, then drunkenly confronts some guys from a rival gym when she hears them badmouthing Kosaku:

I love scenes like that; comedy is definitely one of Takahashi's strong points, and she uses it to excellent purpose here, with some goofy slapstick and hilarious facial expressions, like the over-the-top frustration of Kosaku's coach: 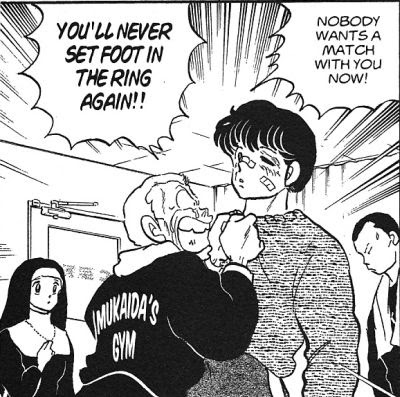 I also love the way Kosaku's opponents are all so ridiculously intense, a parody of the Japanese male honor that's been around since at least the era of samurai. Takahashi spoofs that type so well, scenes featuring them can't fail to bring a smile to the face: 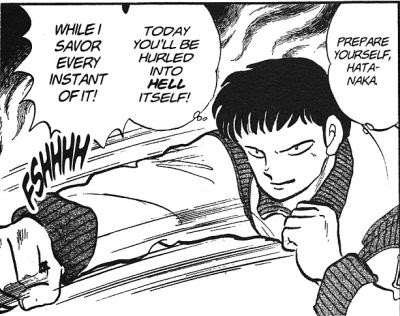 And to add to the humor, these overly-honorable athletes usually get a humiliating comeuppance, with Kosaku winning through sheer luck or unconventional fighting. It's incredibly entertaining, and Takahashi makes the variations on the theme and growth of character really enjoyable. And while her art is a bit rougher than that of most modern manga, the fights are easy to follow and wonderfully dynamic: 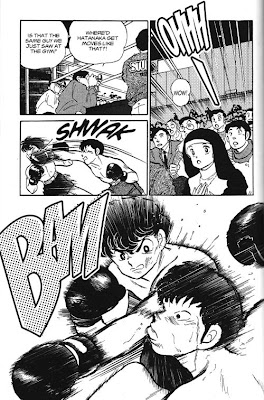 It really seems like you can feel the blows right alongside the characters. It all makes for a really fun book, and a compelling, if fairly simple, story. I look forward to seeing Takahashi continue to develop the characters; Kosaku can't keep skating along on luck and good intentions forever, can he? Knowing Takahashi's grasp of character development, I expect she has plenty of nice developments in store. I can't wait to find out, and this definitely makes me want to search out and read as much of Takahashi's work as I can get my hands on.

This review was based on a complimentary copy provided by the publisher.
Posted by Unknown at 9:49 PM