Ah, something to link to: a review of Haunt of Horror: Lovecraft #1. Good stuff. And now this, from what seems to be becoming a manga blitz of sorts (I'll keep my fingers crossed that it doesn't stall): 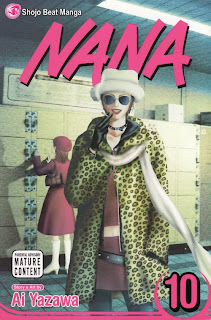 Even though this isn't exactly a quiet volume of the series, it's something of a breather, at least compared to the emotional turmoil (for both the characters and the readers) of the last couple outings. Instead of big, dramatic, angst-filled character developments, we mostly see plain old forward plot movement and quiet revelations about characters major and minor.

Yasu especially seems to get a bit of a spotlight here, as what seemed to be a close friendship with and protectiveness toward Nana turns out to be actual unrequited love, which he knows will likely never be returned due to her relationship with Ren. And this also adds an interesting wrinkle to his relationship with Reira, since he broke up with her by saying he wanted to study law instead of playing music, but we now realize was actually because he loves Nana. And who knows if this revelation will have consequences down the road, or if it is simply a nice moment here. That's what's great about Yazawa's writing: all the characters seem so well-realized, and their web of connectedness leads us and them to realize how small decisions and revelations affect everyone else. It's a bit more dramatic than real life, but it's got enough of a realistic quality that we can easily relate to the characters.

And then there's Hachi and Takumi's relationship, which seemed doomed in the last volume, but gets a bit deeper and sweeter here. While he still seems to take her for granted and act all controlling, we do get to see the facade peel back a bit and reveal his affection for her and his excitement about their baby (what's the statute of limitations on spoilers from volume 8? I think I'll wait another volume or two before I start cavalierly mentioning stuff from that volume's big twist. Anyway, you can highlight that last bit of inviso-text to reveal said spoilers). And Hachi is really starting to love him, but how much of that is still based on his fame and image? Is she just trying to convince herself that she loves him in order to make the best of her situation? She is prone to that sort of activity, dating all the way back to that pedophile businessman she dated before the series even started. But whatever the case (and I will certainly enjoy seeing how it all plays out in the future), Yazawa isn't taking the easy way out and making Takumi a hissable bad guy. She's deepening their relationship, which will make for more drama if it ends up falling apart. Damn, she knows what she's doing.

But no, the big events here aren't personal, they're professional (although in the music business, those two often get enmeshed, don't they?). A small slip-up on Ren and Nana's part leads to the paparazzi getting photos of the two of them together, splashing their relationship all over the tabloids and inadvertently kick-starting Blast's major-label debut. Or is it inadvertent? There are hints that higher-ups in their record label masterminded the whole scandal as a means to get people interested in the band, and that leads to some interesting quandaries about the mixture of art and commerce. Nana and the guys want to become famous, but is it right to piggyback on Trapnest's popularity? Shouldn't they be able to make their name by themselves? Or should they take advantage of the situation into which they've been thrust, and make the best of things, showing that they deserve acclaim and aren't just riding their more famous friends' coattails?

And in the midst of all this, I'm loving the character moments and fun details that Yazawa includes throughout the volume, like Yasu punching out a tabloid reporter who is harassing Nana: 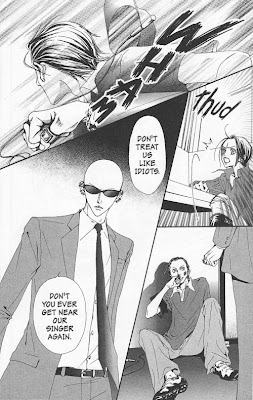 Or Nana making a public promise to Hachi: 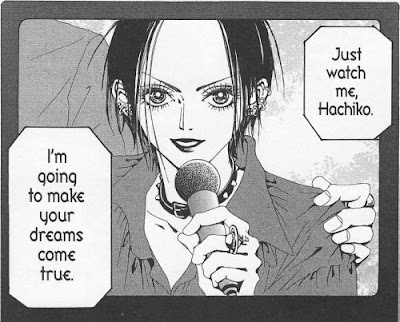 And Yazawa really makes it fun to read, having the cast engage in goofy repartee and adding funny little details into the art, like this bit in which Shin has trouble using chopsticks: 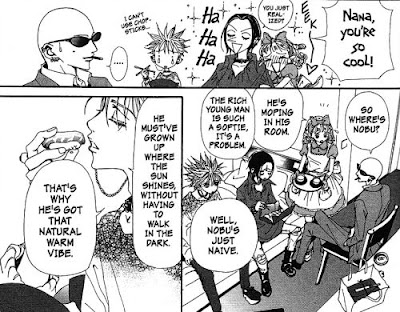 And that last panel makes me laugh, since it features that flowery philosophizing and descriptiveness that often shows up in Japanese works. Here's another example, which I think is a great thing to yell at people when you're angry: 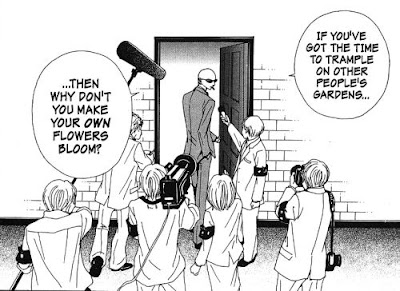 And as you can tell from these samples, Yazawa is a really good artist, varying from cartoony stylizations to beautiful emotional imagery and wonderfully evocative expressions of emotion. I did want to point out one thing I noticed: 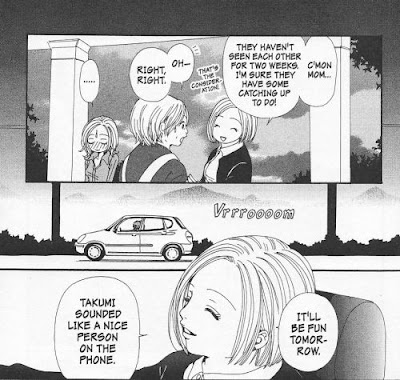 That's a scene with Hachi, her sister, and their mother. I was really impressed at how well Yazawa makes these characters all look like they're related, without just drawing basically the same face on all three of them. The sister looks like an older, more domesticated (i.e. plump) version of Hachi, and the mother looks like an older version of that. It's fascinatingly subtle, and just one tiny example of Yazawa's artistic excellence.

So, yeah, it's another great volume of one of my favorite series. Are things settling down after the big shakeups, or will more dramatic rumblings continue to develop? I can't wait to find out.
Posted by Unknown at 10:18 PM