I recently finished playing a game that I found incredibly affecting. It's called Okami, and it's on the Playstation 2. 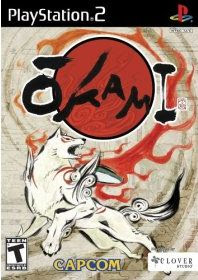 The story is rooted in Japanese mythology; you play the sun goddess Amaterasu, incarnated in the form of a wolf. The tale starts with a legend of a monster called Orochi, who is an eight-headed dragon that is terrorizing a small village. You end up going on a quest to defeat him, and then get sucked into an epic adventure in which you travel all across Japan, finally meeting the very fount of evil and banishing it. 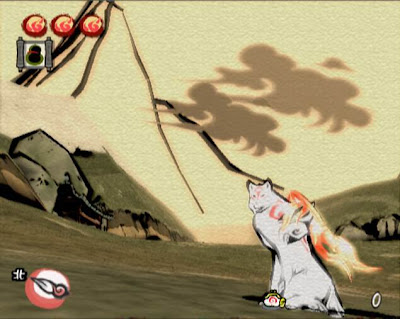 As you can see in the pictures I've provided, the art style in this game is like no other game out there. Everything looks like it was drawn in a calligraphic style, but it's all in motion, filled with bright, beautiful colors. A really cool thing about the game is that Amaterasu, being the sun god, brings growth; this leads to scenes in which you defeat evil and then watch as the land springs to live, turning from dim and lifeless to a verdant green. As you run, plants and flowers spring up in your path, and leaves and cherry blossoms fly out in small clouds when you jump in the air or attack an enemy. It's amazing to watch. 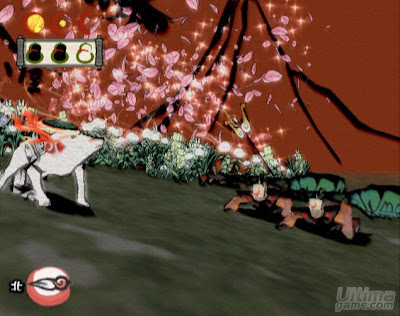 Being a god, Amaterasu has some cool powers, which bring another aspect to the game. You have the power of the "Celestial Brush", which allows you to paint on the game screen to accomplish certain tasks. There are 13 total brush techniques (plus some bonus ones), and much of the game is spent gathering them into your repertoire. Here's an example of one that gets used quite often in the course of the game: 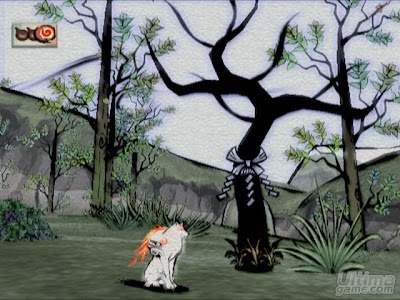 Certain trees and plants that look dead and lifeless can be brought back to life. 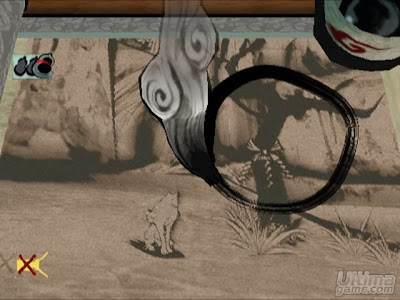 Activating the Celestial Brush flattens the game screen into a scroll that can be drawn on. You can see how the brush is used to draw a circle around the tree. 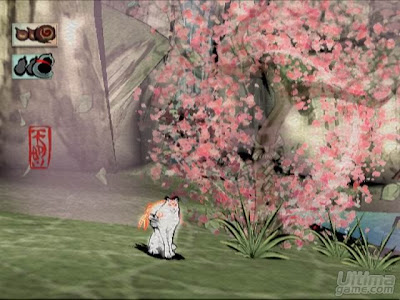 The tree then springs to life in a swirl of cherry blossoms, leaving a healthy result: 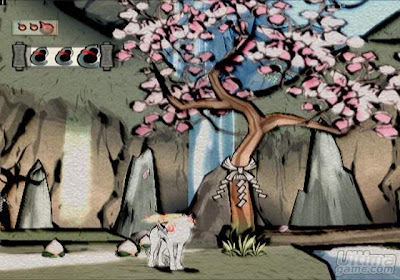 It's very cool. I loved just traveling around bringing stuff to life. And that's just one technique; others include a sword slash, bombs, and manipulation of water, fire, lightning, and ice. They're all bestowed upon you by gods who come to life after you draw their constellation in the stars: 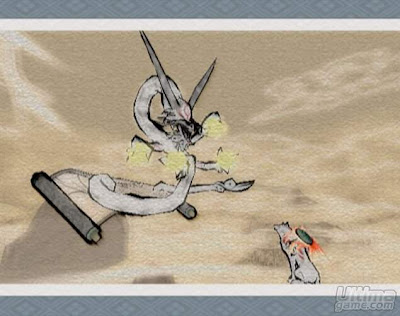 The game has been compared to the Zelda games in structure, and that's pretty apt. You explore a large world, gathering tools and techniques and fighting enemies. There are several "dungeons", each of which has a "boss" to defeat, usually by using the brush technique you most recently learned. You even have a small companion that travels with you, speaking to other characters and pointing out relevant details, both in landscape and plot. It's a pretty good structure to build a game on, but it's far from a clone; Okami has a very unique plot, characters, and art style. 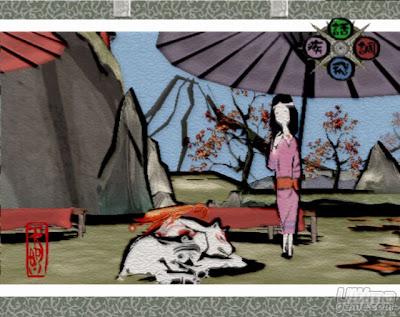 The characters are especially good. Amaterasu, at the center of everything, is very well-defined. Although he/she is the incarnation of a god, he's also very much a wolf, running and jumping in a doglike fashion, growling at danger, yelping when hurt, and yawning when tired. 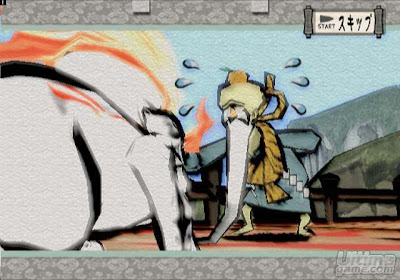 Other characters are good too, from the small bystanders to the regular supporting cast. That's Mr. Orange above, a major player in early parts of the game. He does a hilarious dance to get the trees in his village blossoming. Issun, the aforementioned companion, is a buglike character who spends most of the game hopping up and down on the end of Amaterasu's nose. He calls the wolf "Ammy" and gets in arguments with many of the other characters (incidentally, the "voices" of all the characters are relayed in gibberish bleeps and bloops, with the pitch changing depending on the age or sex of the speaker; it's annoying at first, but you get used to it pretty quickly). He claims to be a wandering artist, but we later find that he is of a race of tiny people called "poncles" that are trained to be envoys to celestial beings that come to earth. Most of the characters in the game are like this; they start out seeming like simple background-filler, but are later revealed to be much more deep. One of my favorites is Susano, a descendant of the great warrior Nagi. He's got some self esteem issues, claiming to be a great warrior, while spending most of his time passed out drunk. At several points, you convince him to slash something with his (wooden) sword, then use your Celestial Brush to chop it in half, surprising him greatly. The first several times this happens, it's played for comedy, with him staring at his sword, surprised of his own strength. But then at one point he breaks into an anguished monologue, wondering why the gods are controlling him. It's fascinating. 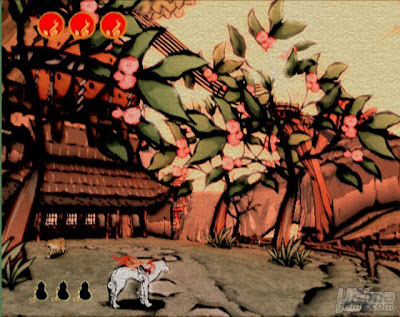 And then there's the amazingly emotional ending (this paragraph contains spoilers, so read at your own risk). You end up on this spaceship that came to earth from the celestial plain. It turns out to be the source of all evil in the world and is occupied by an evil being called Yami. As you're about to enter the ship, Issun decides it's time to part ways. So you end up alone on the ship, and after several battles, you confront the big bad guy. It's a really long battle, and at one point, you think you've won, but then Yami comes alive, darkens the sun, and leaves you powerless. Suddenly, you start having visions of all the characters you've come across during the course of the game; they're all thinking about you and hoping you're okay. Then you find that Issun has been traveling the land telling people about you (he's a wondering artist, remember?). He convinces everyone to start praying for your strength. Their prayers all flow up to the heavens, gathering around you and giving you strength. They all flow into you, and your powers are all returned; you're ready for the final battle! It's amazingly emotional, and a great cap on the experiences that you've had with all the characters all across Japan. Amazing stuff; I thought I was going to cry. 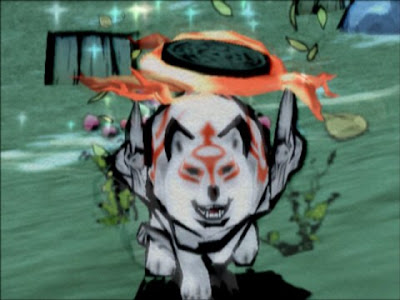 So, I give this game my highest recommendation. Beautiful art style, wonderful plot, great characters, the works. Check it out! 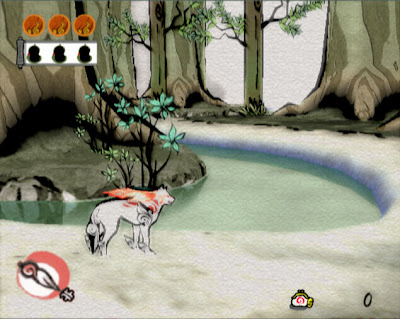 I got most of these pictures from this Spanish site, where you can see more of them. Some of them are from early versions of the game; the American version does look slightly different (mostly in the interface). If you're interested in seeing the game in motion, there are some videos here. 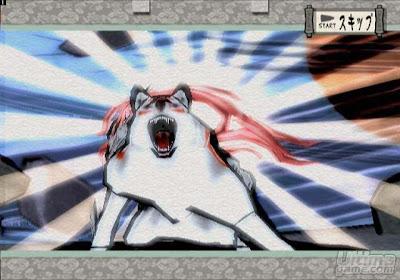