Time to calibrate your Weird-Shit-O-Meter 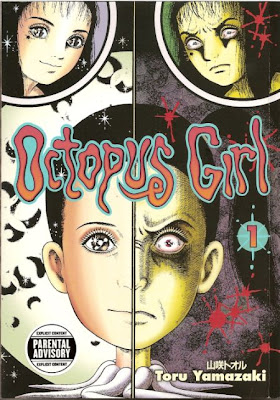 I think this manga falls into a genre that is somewhat aimed at children in Japan, but gets "EXPLICIT CONTENT" warnings slapped all over it when it gets imported to the US. Jog did a review of Apocalypse Zero (It's about halfway down the page on that link) on his blog a while back, and it's a good summation of the shounen genre of children's manga. Octopus Girl is kind of similar, although it goes for horror (and also seems to be aimed at younger girls). I can't say for certain, and maybe I'm misinterpreting it, but the aim in this manga definitely seems to be toward gross-out humor and gory violence, rather than the creepy (or erotically gory) direction that Japanese horror seems to follow when it's aimed at adults. Or maybe the Japanese just really enjoy a lot of snot and vomit. I tried to find out some info about the series, or about the author, Toru Yamazaki, but all I could really find out is that he is openly gay (which is even harder to be in Japan than it is in the US), and he's a TV personality. Anyway, I think the manga is meant for somewhat younger readers (maybe 10-12 years old), but that doesn't mean I don't find it enjoyable.

(By the way, I'm going to include some scanned images from the book in this review, so if your Weird Shit Tolerance (WST) is low, you might not want to continue. Oh, and remember to read right-to-left. And click on any of them to enlarge.)

The story begins with a girl named Takako, who is mercilessly picked on at school by a group of girls, who call her "Octopus" (the Japanese word for octopus is tako, which sounds kind of like her name). The gross-outs start early, when one of the girls (the chubby one) jumps on her belly, forcing the vegetables she ate for lunch to come spewing out of her nose: 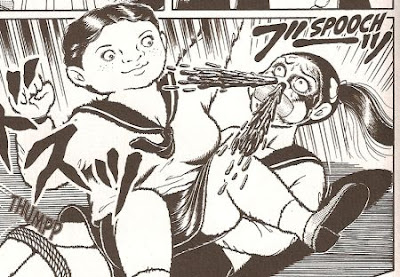 Yuck! And that's on page 2! Anyway, later the girls stuff an octopus in Takako's mouth (she protests that she's allergic to octopus), causing her to choke and vomit. That night she has a nightmare of being turned into an octopus, and when she wakes up, she has turned into one! Sort of. She still has her human head, but her neck ends in eight tentacles. Weird. Actually, I shouldn't say "weird" yet; it's pretty tame considering what's to come. She's so disgusted by what the girls did to her, she decides to kill them. In a strangely joyful manner, mostly by jumping through their windows and suffocating them by jamming her tentacles in their mouth, out their nose, and, in one case, dislodging eyeballs. Here's an example: 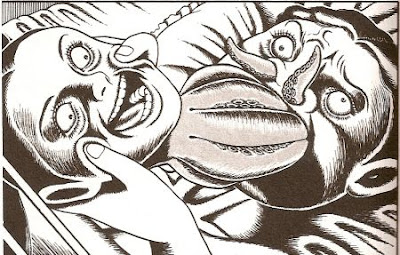 One of the girls manages to catch her and takes her to the ocean to throw her in. But after doing so, she slips and falls to her death on the rocks. Whoops!

So, now she's the titular Octopus Girl, but it would be boring if she just lived in the ocean, so she decides to play "The Little Mermaid" and finds a sea-witch who can make her human again. Mainly because she sees a cute boy named Ayumi who lives by the ocean. But he'll never love an octopus! So the witch, who looks like this: 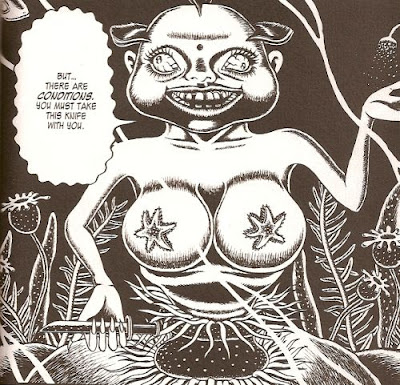 Yikes! And I thought the witch from the Disney movie was ugly. Anyway, the witch will turn her human, but she has to be engaged to the boy within seven days, or she'll turn to foam. Alternately, she can stab him in the heart, and she'll stay human. Either way. You know, fielder's choice (Sorry). So she becomes human, lives with Ayumi and his mom (after they find her washed up on the beach), and thinks they're falling in love. Then, on day six, this girl shows up to visit. She's been engaged to Ayumi for six months! And he reveals that he thinks of Takako as a sister! Oh, the horrors! Luckily Takako has the knife she got from the witch, so she takes care of business with Natsumi: 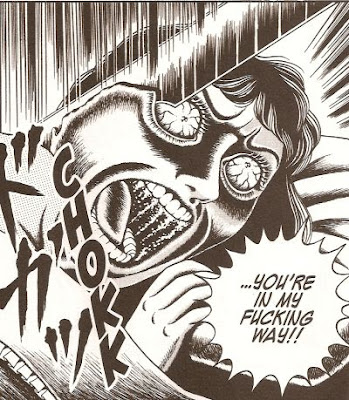 But Ayumi still doesn't want to get engaged to her. "Are you an idiot?" he says. "I'm grieving!" The nerve! So she's pretty much gotta kill him, too. But she has second thoughts, thinking, "I can't kill Ayumi! My dear Ayumi! I'll happily turn to foam!" 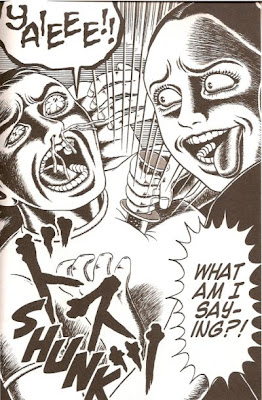 "Sorry Ayumi! Turns out I'm a modern girl after all! I can't die for love!" What a bitch.

So now she's human, and she decides she wants to be famous. So she joins the "Japanese Idol" competition to be a singer/model/spokesperson. She makes it to the finals, where the other two girls are pretty catty. Oh yeah, and she also discovers that she can change at will between human and Octopus Girl. She spends two pages changing back and forth until somebody gets sick of it: 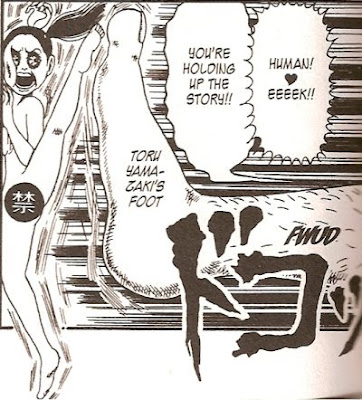 Oh Yamazaki, you devil! There's more fourth-wall breakage to come, by the way. So she decides to sabotage the other two finalists, first by putting something in the first girl's dress when she goes up to sing: 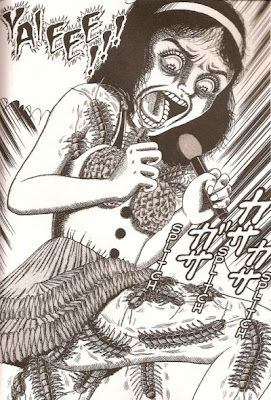 Ooh, ouch! The girl has to be rushed to the hospital from all the centipede bites, so she's out. Then Takako has this hilarious exchange with the other contestant: 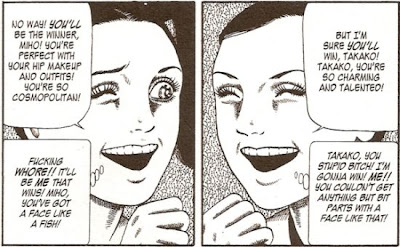 Man, teenage (or pre-teen) girls are so mean to each other. The next competition is to drink milk, as a test for a mils sponsorship, so Takako cuts off one of her octopus tentacles and puts it in the girl's drink. Hilarious! The girl's out, so Takako wins by default! She gets to go on a modeling trip to Okinawa right away, but wouldn't you know it, the plane crashes! Luckily, she can turn into an octopus, so she doesn't drown like all the other passengers (I couldn't make this stuff up, folks!).

So then she's floating out in the middle of the ocean, when she gets picked up by a cruise ship (They see her head and think she's human, but she turns human, but almost drowns...oh, never mind). But this ship is haunted, by some kind of vampire that's killing all the girls on board! Here's some of his handiwork: 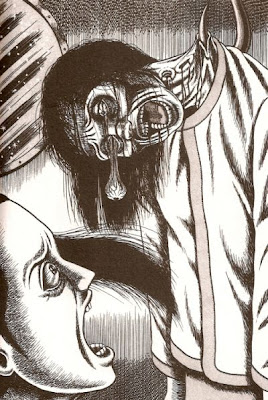 Soon, Takako and an old lady are the only females left on the ship, and the old lady has Takako bunk with her to keep her safe. One guess where this is going: 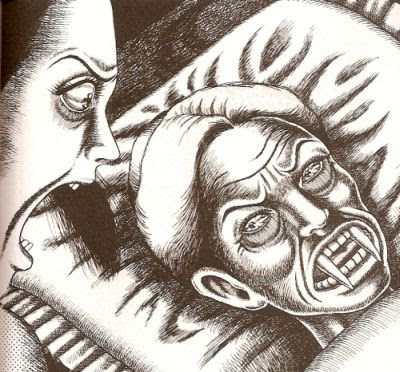 That's right, the old lady is the vampire! But she gets sick (and appears to die) when she tries to bite Takako and only sucks out ink. So Takako decides to leave and jumps back in the ocean. But then she discovers a new friend/rival/other freak: 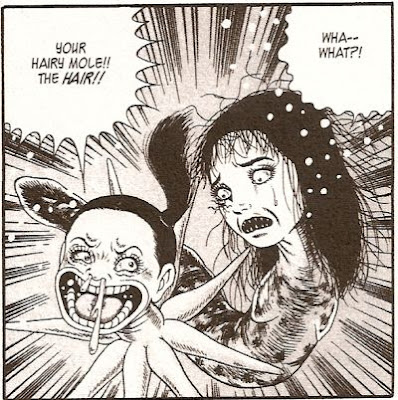 Sakae, a girl who has the body of a moray eel! Now that's just silly. (By the way, Takako's laughing at the hairy mole on Sakae's face there; that's why snot is coming out of her nose.) We learn her story: she worked at a hospital for a young surgeon that she was in love with, but he only thought of her as a sister (there seems to be a theme developing here). One day he invited her over for coffee, but then he drugged her, and when she woke up, she found that he had removed her head and grafted it onto an eel's body. You see, he knew that the polar ice caps would melt one day, and the earth would be covered with water, so "only fish-people will be able to survive!" She is understandably upset, so she bites his face off (I'll spare you the panel; suffice to say it is hilariously gruesome). So now she lives in the ocean, and the two of them will be friends! Or enemies. They can't seem to decide.

So that seems to be the setup for the rest of the series, continuing, I assume, into future volumes. The rest of this volume contains Takako's and Sakae's adventures together, mostly consisting of Takako trying to get a job to pay to fix Sakae's teeth (they're all sharp and nasty, see. Not that the rest of her is any better...).

There is one chapter worth pointing out, however, due to it's sheer insanity. It starts with Takako and Sakae announcing to the readers that they have a new CD coming out. Here they are practicing their singing: 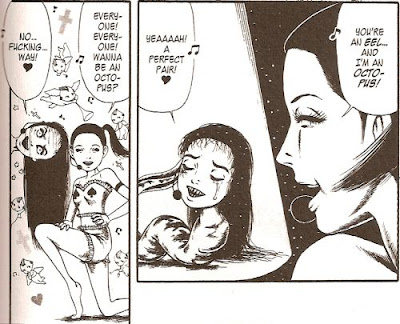 "I'm sure all you readers are wondering," says Sakae, "when is your CD coming out?" Here's their answer, and the reaction of the "readers": 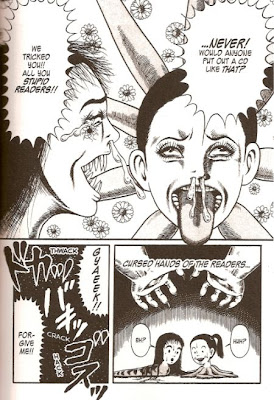 Now that's silly. I always like some goofy breaking of the fourth wall. Then later, Sakae pukes, and has a really fat belly, so Takako assumes she must be pregnant! After a few pages of labor and silly jokes, she gives birth to: 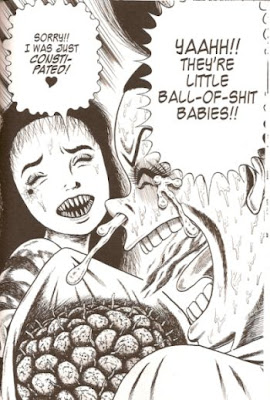 See what I mean about the juvenile gross-out humor? This leads to another thrashing at the hands of the readers. Then Sakae pulls a swimmer under the water, and Takako eats her. The readers get so pissed, they close the book! Man, what a weird chapter. Good times.

So it's a pretty goofy book, too silly to be considered genuine horror (by me, at least; others might get quite put off by the gore). It's actually an interesting psychological look at what might be scariest to young girls: social rejection, romantic rejection, fighting with your peers for popularity, old people (or even old people that act like young people; in one story, the old lady vampire returns and dresses as a little girl to fool Takako), and pregnancy, to name a few. In fact, the only place where the book approaches genuine horror, in my opinion, is the last (other than some short bonus materials) story, in which Takako gets hired as a housekeeper by a young couple. The couple likes to go out and party every night, so Takako's job is to take care of "garbage", which she soon finds out is actually their daughter! "Garbage" is what they call their little girl, who the wife says "...is my daughter, but her head's not quite right. She's an embarassment, so we raise her secretly in this room." Takako is horrified at how they treat their own daughter (her real name is Mana), who is left to live by herself, in filth, in her room. She gives Mana some paper and crayons, and is amazed when the girl shows some real artistic talent. But when she shows the drawing to the parents, they rip it up, saying, "anything drawn by 'garbage' can only be trash!" Takako is horrified (again), and she resolves to encourage Mana in her art. But soon the parents decide to let Takako go, since they are putting Mana in an institution, and are glad to be rid of her. Takako storm out, saying, "I quit! It's you two who should be locked up in an institution!" After she leaves, she realizes she forgot to say goodbye to Mana, so she returns only to find that the girl has painted her masterpiece, with her parents' intenstines!!! Hahahahahahahah!!!

That's pretty fucked-up, but it's pretty effective as horror, with the real scariness coming from the uncaring parents. To kids, it illustrates the fear that their parents do not really want them, and that they are making their parents lives more difficult; parents could be having a great time if they didn't have to care for their kids! That's what's horrific about the story. The guts are just another gross-out.

So, an interesting manga. I don't know if I'll pick up any future volumes, but this one was quite enjoyable. I sure wouldn't show it to any kids though. At least, not American ones.
-----
Any comments are welcome in the, um, comments. Does anybody have any other information about Yamazaki? Am I way off base in what I think is the intended audience? Let me know!
Posted by Unknown at 6:12 PM