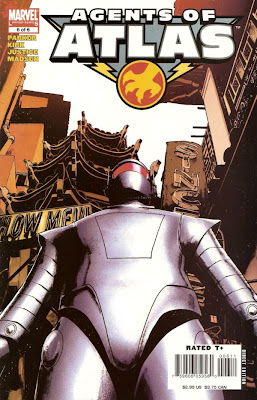 This issue ended the miniseries, and it kind of goes out with a whimper. It might be better when I reread sometime in the future, but it was only so-so. Not that it's bad; it sets up the team nicely, and I hope Marvel brings them back in the future, either in another miniseries or an ongoing series. That would be cool. Hey, at least we got a dragon arguing with a gorilla: 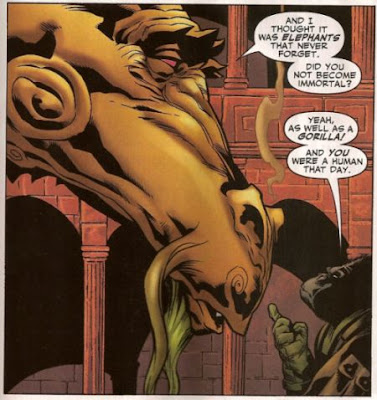 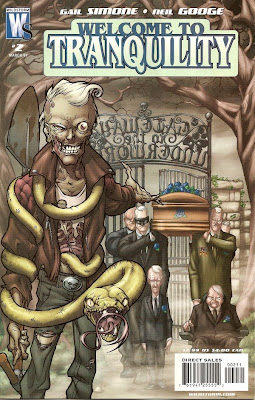 Well, I wanted to like this series, but it just isn't doing it for me. I don't think it's bad; it's just not good enough for me to justify the expenditure. The characters are nice enough (especially Emoticon, although he was funnier in the first issue), and the plot is okay, but I'm just not enjoying it enough to feel like continuing with it. Bummer. My favorite part is probably the little ads and covers and stuff that feature the retired superheroes (or maxis, sigh) who star in the book. Here's an example: 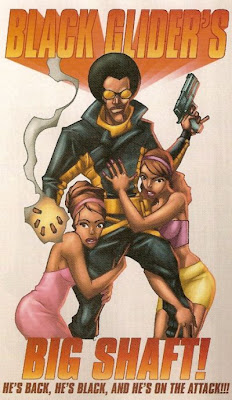 And I like this shot of the superhero mayor tossing a car over his shoulder:

There's also a funny bit with a Cryptkeeper-like graveyard attendant (tha's him on the cover). But I guess I spend enough money on comics that I want to feel like I'm getting my money's worth when I pay for them. Sorry, Gail!
----- 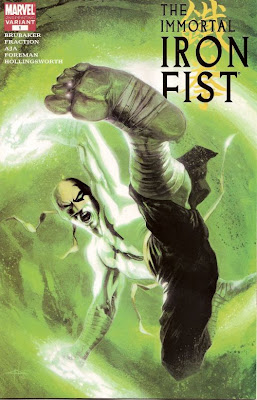 Well, as I mentioned in my weekly preview, I was convinced to buy this by the good reviews I read on other blogs, and they were right! It's a pretty awesome martial arts book, and hopefully it'll get even better in future issues. I'm hoping Fraction sets the tone for the book; I like Brubaker also, but I would prefer wacky over-the-top ideas (like Mechagorgon!) rather than brooding narration about Danny's father. I'm just guessing the narration was from Brubaker; I could be wrong. Hopefully most of the heavy-handed stuff in this issue was first-issue scene-setting, and future issues will concentrate on action, action, action! Here's my favorite panel of the issue; I love Iron Fist's expression (as always, click the image to see a bigger version): 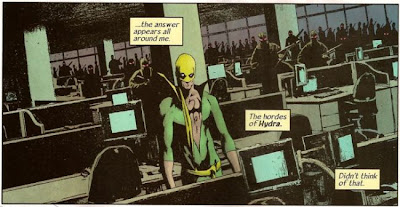 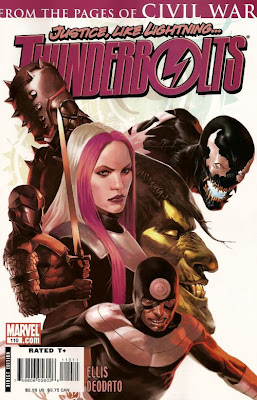 I picked this up on the strength of Warren Ellis's name, and it was okay. Didn't I say I wasn't going to buy anything Civil War-related? Crap. Anyway, I never read Suicide Squad, but this seems like pretty much the same concept: a team of villains controlled by the government goes on dangerous missions. Of course, they're hunting rogue superheroes, and they're a public team, so that's a slight difference. Ellis plays the concept mostly for satire, and it's pretty enjoyable, especially the news coverage and TV commercials. I might or might not get the next issue. I did learn one thing though: 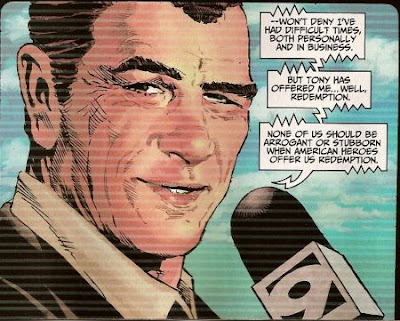 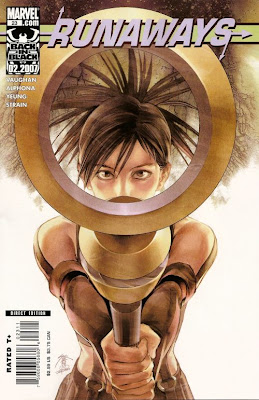 Well, it's the second-to-last issue of Vaughan and Alphona's run on the series, and I was right; they appear to be going out with a bang. Who knows what will happen next issue. Some great stuff this issue, including the continued deterioration of Karolina and Xavin's relationship and Chase's excellent confrontation with Victor. I hope Whedon can write these characters half as well as Vaughan does.
-----

The Nightly News #3 (of 6)
by Jonathan Hickman 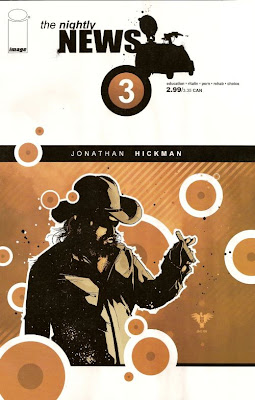 This comic is probably my favorite of the week, and possibly one of my favorites of the year. I'm amazed at the designs Hickman is coming up with here; I don't think I've ever seen anything like it in comics. And the story is a fun, Chuck Palahniuk-style look at society in which we're informed that the tyranny of the government and major corporations is keeping us all in line while they run the world. I used to go crazy for stuff like that, and I think it's an interesting point, but now I mostly look at it as a fun plot point to lauch stories about revolutions and such. Anyway, I love the look Hickman gives the book; it's full of pages like this, where the panels (if there are any) all bleed together and everything looks stylized: 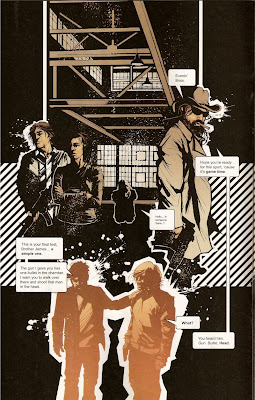 He also throws in lots of charts and graphs. I liked this one in particular:

What's especially amazing about this is that it's Hickman's first comic. It's very exciting to see the beginning of a creator that I think will be a major talent in the future.

Oh, and one thing I wanted to mention: in the letter column section in the back of the book, Hickman mentions that the first issue only sold 16 copies. Really!? I know I've seen mention of the book on two or three websites, so unless those were review copies, they made up nearly a quarter of the issue's sales. Weird. I hope he sells more; I'll keep recommending it.
-----

I also bought the new issue of Godland this week, but I can't think of anything interesting to say about it. I guess I'll just say it's cool, so buy it!
Posted by Unknown at 12:09 PM