In the Wild West, men were often felled by mystic blasts of magical energy

In my look at Image Comics' solicitations for March, I mentioned that I liked the premise for Texas Strangers, but the cover art really turned me off. Well, I'm happy to say that the preview art in CBR's article about the series looks much better. Here's some examples (as always, click to see a larger version): 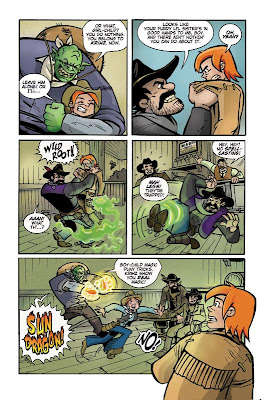 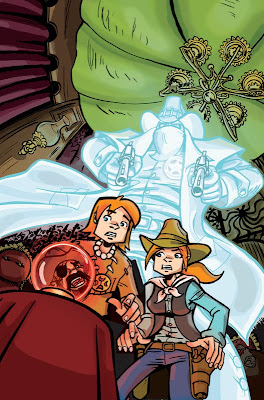 This actually has me pretty interested in the series. I especially like the way the characters shout out the spell they are casting. One thing I will comment on, though: The creators (Antony Johnston and Dan Evans III) are aiming the series at kids, and the author of the article (supported by quotes from Johnston) insists that there are very few comics for kids being made these days. I call poppycock on that. DC and Marvel both have lines for younger readers (DC even has several comics based on popular kids' cartoons), Archie comics continue to come out, Owly and Bone are very popular, Slave Labor Graphics and Oni Press both have all-ages series like Alice in Wonderland and Polly and the Pirates, and manga (both Japanese and homegrown flavors) continues to be ridiculously popular with younger readers. I wish people would get over the idea that kids don't read comics anymore, just because the so-called "big two" don't really cater to that audience. Get over yourselves, people.

Anyway, I'm now interested in Texas Strangers, so watch for a review or something when it comes out.
Posted by Unknown at 10:28 AM