Reviews of recent comics (recently read by me, at least):

Zombies vs. Robots #2 (of 2)
Written by Chris Ryall
Art by Ashley Wood

And so ends the short tale of post-human combat between humanity's dregs and its rotting remnants. It's pretty fun. See, doesn't this image live up to the title?: 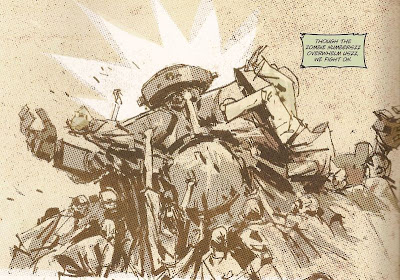 A new "character" is introduced, named Bertie. Or Skull Face; I'm not sure. He's a badass combat robot, unaffected by the zombie virus that's destroying the other robots (that's a pretty novel twist, I think). He has some great lines, and ends the whole battle in a pretty satisfying way. Here, check him out: 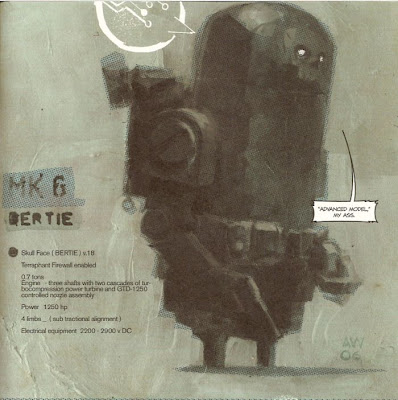 And then the authors set us up for an unexpected sequel, introducing a third party into the proceedings. I think they're trying to add a new category to the endless internet debates that spawned this book; you know, stuff like pirates, ninjas, zombies, vampires, robots, etc. Their new category is a pretty good one (I won't spoil it here, but you can bug me about it in the comments if you have to know), so the forthcoming sequel should be lots of fun. I especially dig Ashley Wood's art style, as I mentioned when I reviewed the first issue. He does a great job conveying the decaying world, with his scratchy lines that look kind of messy until you realize all the details that they convey so well. Keep it up, Ash!
-----

I picked this up on a whim the other day; I liked the look of the art when I flipped through it. I'm not sure exactly when it came out; I think it was in December. Whatever the case, I'm glad I got it. It's a lot of fun. The story concerns two guys, Doug and Manny, who work as janitors (or maintenance men, as the title suggests) for Terromax, a facility that does scientific research for supervillains. In the first few pages, they have to clean up the mess left by the apparent decomposition of a "marauding gigomorph": 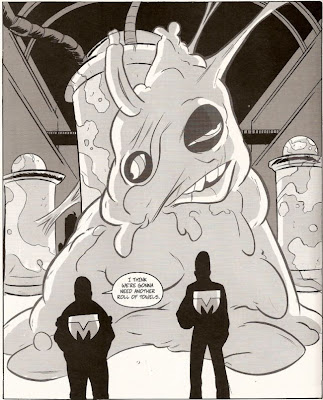 After that, they spend half the issue covered in goop. Then later they talk to an alien that's been mooching off scientists since he crashed his flying saucer in Roswell in 1947. Finally, they end up taking a "manshark" out to a bar so he can get some experience of something outside his tank. It's all very funny stuff, rendered in an expressive cartoony style, with a lot of pop culture references sprinkled into the dialogue (for instance, the manshark(who, in an apparent bid to get Chris Sims' attention, names himself Cobra McPunch)'s only knowledge of the outside world comes from the movie Porky's 2: The Next Day, which scientists taped off TV for him to watch). So Doug and Manny decide to sneak him out for a drink: 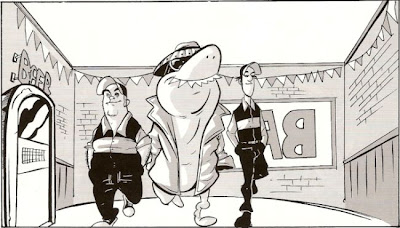 See, check out that goofy style. The book is lots of fun; I have no idea if it's a miniseries or ongoing, but I'll definitely be picking up any future issues.
-----

Now this is a series that I thought about getting when the first issue came out, but didn't for some reason (perhaps the $3.50 price tag). I got the first two issues in a recent sale at my comic shop, and I'm sorry I missed out on them; it's really good! The high-concept pitch would be "Miller's Crossing, but the gangsters are demons." It's an old-school gangster story, but the leading man, Eddie, has been cursed to always come back from the dead, so he doesn't have to worry about the threats the gangsters give him. At least, not too much; he can survive death, but it's not a pleasant experience. The plot has to do with him trying to make sure two rival "families" of demon gangsters can broker a truce; the negotiator has gone missing, and only Eddie can find him. The story takes the familiar gangster tropes and gives them an interesting supernatural twist. And the art fits the tone very well. I'm only familiar with Brian Hurtt from his work on DC's Hard Time; he does a great job here, with lots of moody shadows, atmospheric details, and nasty ghouls. Here, check out a sampling: 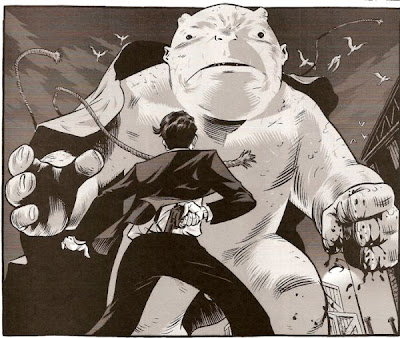 So far, I only have the first two issues. A third has come out, and the fourth comes out this week. I'll have to track them down; I hope the rest of the series lives up to the promise of this beginning.
-----

That's all my reviews for right now. I hope to have some more up soon!
Posted by Unknown at 6:49 PM