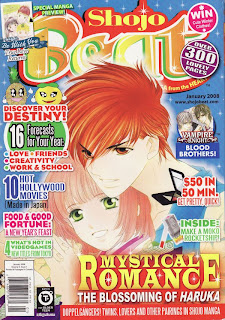 Hey, another new issue of girly manga already! Sweet. Plenty of good stuff here, but mostly limited to the manga. So I'll get right to that, but first, a mention of this issue's guest artist, Tania Del Rio, who illustrates Sabrina the Teenage Witch. Here's her rendition of the magazine mascot: 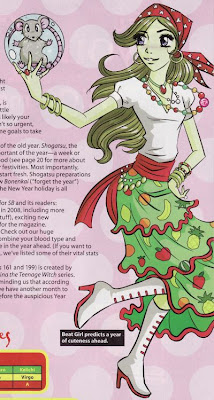 And also, even though there's no mention of it anywhere in the magazine, Absolute Boyfriend will be ending soon (finally!), and the replacement will apparently be a series called Gaba Kawa. I only know this because the latter series is one of the ones in the 2008 calendar included with the issue; here's the image used: 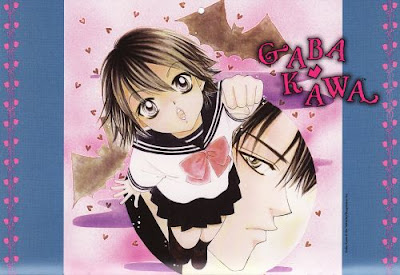 There's not much information available online (that I could find), but apparently it's by Rie Takada, the creator behind Punch! and Wild Act, it's about a demon girl who falls for a human boy but must hide her true nature, and it's only one volume long. I expect we'll hear more about it soon. Anyway, on to the manga!

I'll start with the worst series and try to get all my negativity out of the way. And boy, do I have a lot of it to expend here. After four chapters, I've come to the conclusion that this series is terrible, and I'm on the verge of starting a letter writing campaign to have it pulled from the magazine. This chapter sees more pointless character nonsense (Akane's friend Tenma apparently is in love with her, but she prefers the evil demon lord because he's pretty, or something) and characters reacting to plot development that takes place off-panel. Apparently Tenma, one of the kids from the future, became a member of an unofficial police force while nobody was paying attention, and now he's protecting Akane. Also, there's other crap about a cherry blossom festival and a trip into the mountains, but I really don't care. And some art that's needlessly obscure and hard to follow: 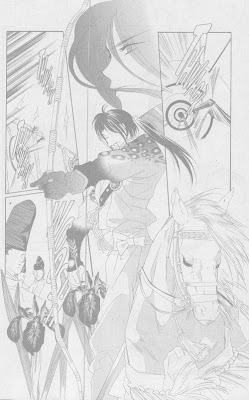 That image isn't quite Michael Turner bad, but it's definitely got some dodgy anatomy, and I spent way too long looking at it and trying to figure out what went where.

So that's it. Fuck it; I'm done with this series. No more mentions of it in my monthly reviews, unless it somehow gets better or does something so bad I have to comment. I'll just try to ignore it and hope it goes away.

Be With You
By Takuji Ichikawa, Yoko Iino, and Sai Kawashima

Normally, I talk about previews of upcoming series first, but I had to get the ranting out of the way. This one is based on a novel, and it's about a father and son whose wife/mother died, but she magically comes back to life. At least, that's what the synopsis says, but it doesn't happen in this chapter. Instead we just get life with the guys as the dad ineptly tries to take care of the son. Meh. Like I usually say about these previews, it's not bad, but I doubt I would be interested in reading the actual series. That's all.

Last chapter, we discovered that the henchman of the evil Shizuka Hio was actually Zero's long-lost twin brother, Ichiru. So this chapter is pretty much all a flashback to their childhood, in which we see that their parents were vampire hunters, Zero was destined to be an awesome vampire killer, and Ichiru was lame and weak. So that's why he joined forces with Shizuka when she killed their family. I guess. Not much going on here, but it's better than some of the drudgery that this series sinks to at times. And there are some nice, gory bits: 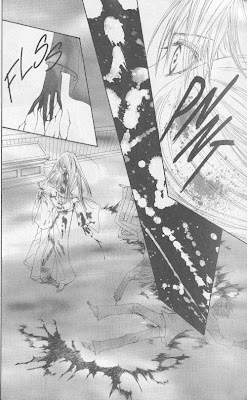 But yeah, not much to report here. Not my favorite series, but it's kind of in an inoffensive groove right now. We'll see how long that lasts.

Well, this is looking better than last chapter, but it's still kind of dumb. Nobara's still training on the beach with the misfit gang of volleyballers. Everybody bands together to help each other out and learn lessons and stuff. It's all very heartwarming, but it's detracting from the main action of the series. Come on Nobara, learn how to be an awesome attacker and go home already! One bit I did like though was when the uptight middle-aged salaryman Mr. Zaki shows up dressed in casual wear. That was funny. And a nice little editorial note lets us know what Nobara is talking about when she says "Genji?!" (it's a reference to an 80s J-pop group). Good job, editors, keeping us informed! But really, it's not good when the editorial notes are the best part about the chapter, so boo for that. Let's hope this gets back on track right quick.

Okay, I'm going to SPOIL the big event here, so skip this section if you care about the secrets of this (fairly) stupid series. In this chapter, Riiko and Night totally do it. Have sex, that is. And that apparently fixes his malfunctions (after he "explodes"). So that's a lesson learned: if you ever need to fix a Yuu Watase robot, just fuck it. And that's about it for the chapter, except for a cliffhanger about Shoji, but Riiko rejected him, so who cares? Will this series end already? All conflicts have apparently been resolved, so let's just let them walk into the sunset and move on with our lives. But I guess Watase has more tricks up her sleeve, in the form of a horribly botched ending, from what I hear. I'm still curious about what that will be, but I'm getting impatient about getting to it. How much more teen sex (with robots) will I have to endure?

Okay, now we're getting to the good stuff. I think one thing I like about this series so much is that I never know what's going to happen. Will Ashihara defuse the dramatic tension with a humorous twist or revelation? Or will she just pile on more tragedy? Luckily, we get the former here (Ann's father isn't in mortal danger; he just fell down and hit his head), but that's what makes the tragic stuff work. That, and the likable characters that we really want the best for. Ashihara's exemplary cartooning doesn't hurt either. Check out this sequence: 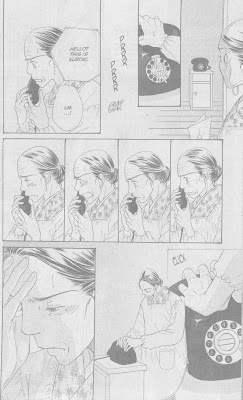 I love how the scene is so understated (which is rare in manga, the medium of overstatement); we get the gist of what's happening, but without dialogue, it's mostly left to our imagination. And that middle tier of panels is just beautiful, offering a great range of emotion and implied conversation conveyed through small variations in facial expression. Wow.

We get some pretty major changes to the plot here (Ann decides to move to Tokyo with her father), which is something else I like about the series. You never know when the plot is going to suddenly skip forward a year in time or completely shift settings. And it's not arbitrary; we understand the decisions the characters make, and the emotional resonance is earned. It's wonderful to watch these scenes play out, even if it's pretty emotionally tiring. Here's another excellent page: 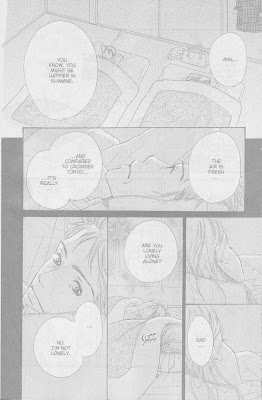 I love the way we only get to see the back of Ann's head; the revelation of tears streaming down her face a couple pages later hits us that much harder. Later, we get some touching scenes between Ann and Daigo, and a goodbye scene that made me want to cry: 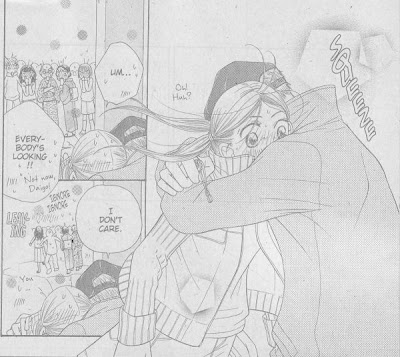 Damn, this series is good. I have no idea where (or when) it's going next, and that's the way I like it.

And finally, the magazine's other excellent series. This is another one that has some really well-done dramatic moments, but it spaces them out with lots of humor. In the two chapters that we get here, the first one has the gang throwing a Christmas party, which involves food, drunkenness and jealousy:

There are also some nice, poignant romantic moments, but the real good stuff comes in the second chapter, in which Takemoto goes home to visit his mom, and learns that she really misses him. He has been avoiding visiting, because he's not too fond of her new husband, whom she married after Takemoto's dad died. But he learns that she still needs him, in a nice, authentic moment. It's part of growing up, figuring out how much to separate yourself from your parents, and this is a good exploration of that time in a person's life. Very well done. 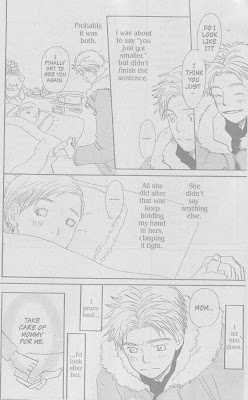 So yeah, this series is really good, with some laugh-out-loud humor and some touching, emotional moments that ring true both in the sense of realism and in the way they fit the characters. I don't care if you're creeped out by cute, big-eyed girls, read this manga!
-----

So, looks like that's it for this issue. I'm ready for the next one to come out now. In the meantime, I hope to have more reviews up this weekend, although I'm mostly caught up in terms of book-length graphic novels. So I'll have some single-issue stuff to talk about. Should be fun.
Posted by Unknown at 10:54 PM