Strange Detective Tales: Dead Love: That's "tales" as in stories, not rear end appendages. That would just be weird

Hey, it's not too late to enter my contest! Design me a logo/banner, and win a copy of Unbeatable. Easy rewards! Okay, here's a book I haven't heard much about, but think I should have: 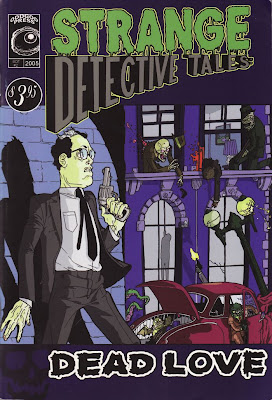 I had heard little to nothing about this book until recently, and that's a shame. This is one of those high-concept books with a compelling hook: noir detective stories meet goofy old science fiction creatures. The 50s-era Los Angeles where this story takes place is filled with all the real old monsters that appeared in the horror and sci-fi B-movies of the period, from werewolves and Frankensteinian creatures to zombies and green, big-headed aliens. The main characters are a pair of private detectives: Renfield (of Dracula fame) and "Dr." Vorlic, a Peter Lorre-esque mad scientist. Bausch and Callahan manage to blend the two styles perfectly, with lots of shadowy skulking, interrogations, violence, betrayals, and lost loves to pad out the noir side of the equation, and tons of nasty creatures to give the story the "strange" aspect. It's a weird combination, but they make it work; in fact, they make them fit together like it's totally natural, which is probably harder than it might seem.

Much of the seamlessness of the combination comes from Callahan's excellent art. It seems simple at first glance, with thin lines and stark backgrounds, but the level of detail soon becomes apparent. The intricate monster designs are pretty amazing, and the action is clearly rendered and easy to follow. I love the way Renfield casually distracts a bouncer in this scene: 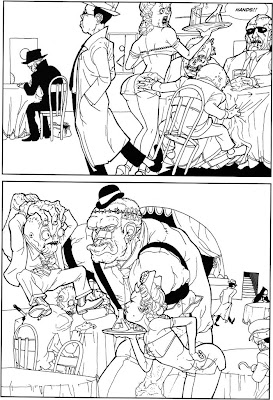 As nice as the art is at first, by the second and third issues, Callahan is really doing some beautiful stuff, with lots mood-enhancing shading and dynamic viewing angles: 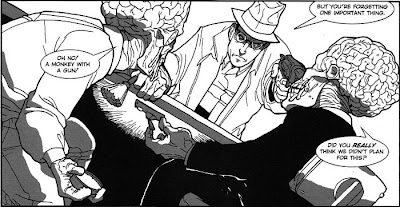 It's a fun read, just seeing what crazy visual will be coming up next, but the writing is also really good, with an interesting, twisty structure and plenty of noirish characters. The story involves Renfield investigating the disappearance of an old girlfriend, and his emotions definitely affect his professionalism. It makes for good reading, and some excellent worldbuilding for any future tales. Hell, I just like being surprised by the stuff they keep throwing at the reader, like porn producers making use of shapeshifters, or nightclubs where giant blobby monsters dance on stage. At one point, some tough guys leave Renfield out in the middle of a field just before sunrise, knowing that, since he's a vampire, he'll get burned up just trying to get home. The result is pretty gruesome: 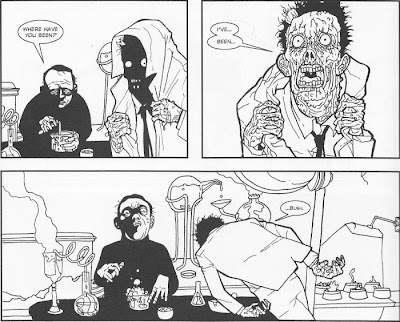 At another point, he is asking around for information, and he gets stuck buying drinks for three disgusting harpies who just want to get him in bed (although I'm not sure that would be for sexual purposes): 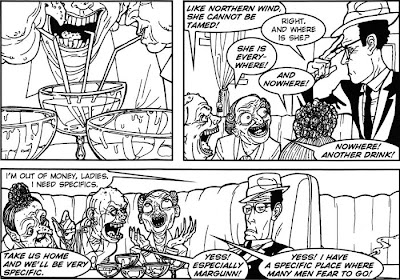 And I won't spoil some of the excellent surprises, like the livestock kept in the farm where Renfield and Vorlic hide out, or the identity of the real-world freak who gets caught up in the matter. That's stuff you have to see for yourself.

Each issue is a pretty good value, with backup stories and pin-ups by the likes of Joel Priddy, Becky Cloonan, Ian Sampson, and Shane McDermott, among others. There seem to have been some scheduling delays, since the first two issues have a 2005 date on the cover, and the third only just came out in November 2007. I hope they've managed to clear things up; I would love to see more stories in this vein. It's a fun little universe these guys are building here, and I can't wait to see what they come up with next.

If you're interested, you should be able to order copies of the issues from your local comics shop, or you could try Oddgod Press's website, although I find it kind of hard to navigate. But it's definitely worth hunting down, so good luck!

Thanks to Jesse Bausch for the review copies.
Posted by Unknown at 8:04 PM