The Goon: Chinatown and the Mystery of Mr. Wicker
By Eric Powell 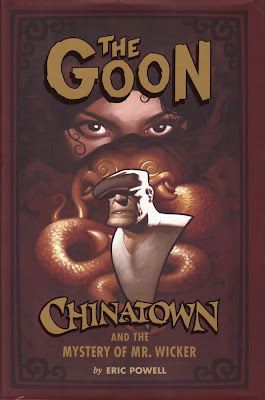 The regular Goon comic is one of the funniest comics being published, but this "origin" graphic novel is different, as proclaimed by a post-title page illustration of a gargoyle and "This Ain't Funny" in giant, page-filling letters. It's an indication that we're in for a different sort of story, one of tragedy, sorrow, betrayal, and despair. Sure, the series has trafficked in these elements before, but it still lightened the dark spots with some of its trademark humor; Eric Powell has purposefully omitted any levity here, letting us focus on the tragedy of the Goon's past (and, occasionally, his present).

The story here is twofold, with part of it taking place in the present as a strange adversary calling himself Mr. Wicker (so named because his body is covered in thorny twigs) shows up, beats the Goon and Franky to a pulp, and starts taking over all the rackets in town. We also get flashbacks to the Goon's past, in another incident where he almost lost control of the city's criminal element, this time due to love. But since that dame isn't around in the present, and we've seen that the Goon seems to feel that nobody can love his ugly mug, we know it's not going to end well. Sure enough, his heart gets scarred as much as his face does.

It's pretty effective stuff; at first I wasn't feeling it, being too used to the series' regular humor and regretting its loss. But soon enough, I was caught up in the story, wondering where it would be going next, who the mysterious Mr. Wicker was, and what happened to the Goon in the past. The atmosphere becomes more like a noir film, full of shadowy villains, femmes fatale, and criminal struggles (and a prevalent magical element, as befits the series regular story).

Powell's art is as excellent as always; he shades everything with watercolor-like hues that give the story a somber mood, and the scenes in the past are sepia-colored. The whole book has a dark, grey tone that fits the world of moral compromise; with the excision of the comedy elements, the occasional bright, fantastical colors have disappeared as well. The character art is beautiful as well; Powell draws wonderful old-world faces on all the gangsters and tough guys that fill the background scenes, and his work on the Goon is incredible. When he's happy and in love, we see a smile on his face and a bright spark in his eyes; it lends an understanding to his constant grim face in the present. And one scene still sticks with me: a bit where, after the Goon has been rejected, he stares in the mirror looking at his ugly mug. Powell depicts it as a series of full-page illustrations of his face, with each one looking more anguished than the last. It's hard to watch; you can see his heart breaking right in front of your eyes: 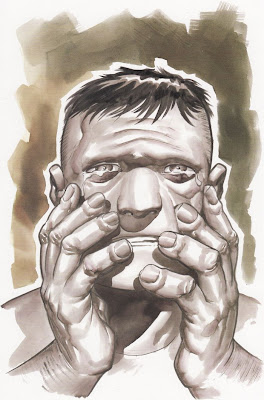 So, it's a really good book, although it's probably geared toward fans of the series rather than casual readers. I don't know what someone who had never heard of The Goon would think of it, but hopefully it would still hang together and make a nice noir tale even divorced of familiarity with the characters. But for me, it's a really good addition to the background of the book, and I'm hoping it will add to future installments. Now, hopefully Powell will be able to put out more than a couple issues a year...
Posted by Unknown at 10:08 PM

Email ThisBlogThis!Share to TwitterShare to FacebookShare to Pinterest
Labels: comics, The Goon