With the Light: Raising an Autistic Child: I can't think of a funny title, but that's probably for the best

Hey, got a review of the final issue of Potter's Field over on IndiePulp, so check that out! Also, last chance for the contest! Didn't I say that earlier? Oh well. Here's a review:

With the Light: Raising an Autistic Child, volume 1
By Keiko Tobe 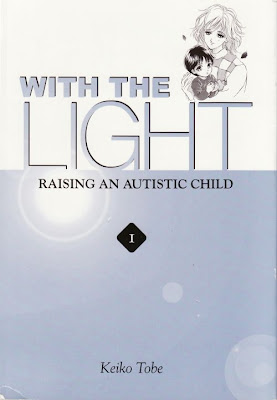 This is an odd sort of comic that we don't really see in the West very often. It's sort of a serious drama, but with an educate/inform. I would liken it to a TV movie about a character dealing with AIDS or something (in fact, it was adapted into a successful TV drama in Japan). The sheer volume of manga published makes for a huge breadth of material, so they probably have quite a bit of stuff like this. It's interesting to see some of it make its way over here, and I'm glad I got a chance to read it.

The story is about a woman named Sachiko who has a child, Hikaru, and he seems normal at first but soon starts exhibiting strange behavior and having developmental problems. At first, he is misdiagnosed as deaf, but soon enough a doctor figures out that he is autistic, which presents a huge series of challenges for Sachiko. The early parts of the book make for some pretty harrowing drama, since Sachiko doesn't know how to deal with Hikaru, exhausts herself trying to care for him, and gets blamed for being a bad mother by her husband and mother-in-law. Those latter two characters come off especially bad at first, with the mother-in-law telling Sachiko she is at fault for raising Hikaru poorly and the husband, Masato, refusing to help, only caring about keeping the baby quiet so he can get rest and go to work. It's probably a bit of a cultural disconnect, since men in Japan are expected to work very hard to provide for their families, but it still seems unnecessarily harsh. Luckily, everyone is eventually educated as to the nature of autism, and they all come around and help out with raising him.

As the book progresses, Hikaru gets older; this volume sees him enter and complete the first few years of elementary school. As he progresses, we see Sachiko and Masato learn more and more about autism, figure out ways to teach and connect with Hikaru, and deal with the understanding and scorn of other people. Amusingly, it's kind of like a shonen series, with people like the school system or other parents opposing them at first, but deciding to help out and join the cause after they learn about autism. But it's mostly concerned with Sachiko and her feelings about Hikaru. She's a good point of view character, demonstrating a real love for her difficult son and trying her best to understand and help him get through life. There are some really good emotional scenes, like when Hikaru first calls her "Mommy", or when he graduates from pre-school. If there's one thing manga does well, it's drama.

On the art side, Tobe uses a pretty standard shojo style, with background designs used to indicate emotion and lots of closeups of faces (often with teary eyes). She does a great job of getting information across, never leaving the reader wondering what is supposed to be happening. And the big-eyed manga character designs really work well for her subject, making Hikaru seem just a little bit "off": 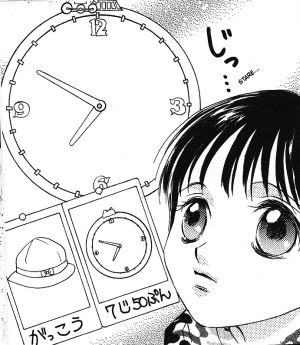 She's also excellent with the drama, occasionally putting Hikaru in dangerous situations that really seem scary, probably because we see Sachiko's reactions to them.

Obviously, the book is very well-researched, and quite informative. I learned a lot about autism reading it, and I'm curious how much farther the series goes. Do further volumes show Hikaru progressing all the way through high school? Do we see him as an adult? It should be interesting to see.

So, I definitely recommend this for people looking to get a different sort of reading experience. It's very well done (and a good value at $14.99 for over 500 pages), and I hope to read further volumes as they come out.
Posted by Unknown at 9:00 PM