Ah, the weekend. Time for me to slack off not do much of anything, especially blogging. But I've gotta get back into things, so here's another review. And I'll plug the contest again, although I'm despairing of getting any more entries. I had originally given December 10 as the deadline, so if I don't get anything else by the end of the day tomorrow, I'll declare a winner. Anyway, here's a weird book: 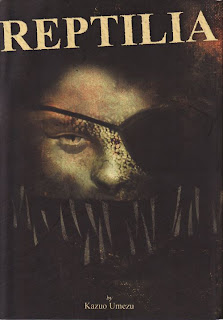 I love Kazuo Umezu's insane Drifting Classroom (here's my review of the most recent volume that I've read), so I was excited to check out another manga of his. This one is a bit older, originally published in 1965, and it seems a bit less polished than his later work. While it has a lot of weirdness and ostensibly scary stuff, it's not nearly as disturbing; it seems more like a corny monster movie.

The book has three stories, with the first two linked and the third acting as something of a prequel. They all involve young girls being menaced by a "snake lady", a beautiful woman who turns into a snakelike creature and tries to eat them. In the first story, young Yumiko is visiting her mother in the hospital when she learns that there is a snake lady being kept somewhere in the facilities. Curiosity getting the better of her, Yumiko wanders around the hospital and stumbles across the snake lady's room, which isn't very secure, since the lady escapes that night and takes the place of Yumiko's mother (she can look like a normal woman when she wants to). She then comes home, and only Yumiko knows she is an impostor, so there are plenty of tense scenes with the snake lady menacing Yumiko and nobody believing her. It's pretty amusing stuff, and Umezu is always there with the bizarre details, like the snake lady being obsessed with eating frogs: 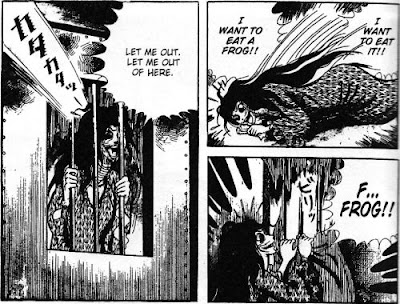 This chapter sets up a trend that will last throughout the book, in which the snake lady repeatedly menaces and threatens the main character, but doesn't actually kill her. She'll stand in front of her saying, "I'm going to eat you now!" but she won't actually do anything. It's like one of those corny old monster movies where the monster chases people around without ever catching or hurting anybody. It gets pretty silly.

After the snake lady is dispatched (sorry, spoiler, but really, did you expect anything else?), the second story sees Yumiko going to visit her relatives in the country. Little does she know, the snake lady escaped her captivity and stowed away for the journey. She's really obsessed with Yumiko for some reason. The people in the village are superstitious and think Yumiko is a snake lady, somehow related to another snake lady that lived in the village. The villagers avoid the "snake house" where the old snake lady lived, so Yumiko and her cousin Kyoko naturally go check it out and get into trouble: 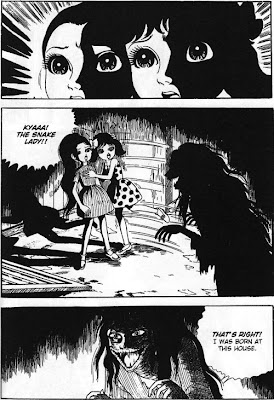 Kyoko gets bit by a snake there, and the snake lady that came along with Yumiko messes with her medicine in the hospital (or something like that), so Kyoko ends up turning into a snake lady herself, converting the rest of the members of her family, and trapping and menacing Yumiko. It's pretty ridiculous; they trap her in the house and say they're going to kill her, but they never actually do anything. Eventually, they all get defeated, and Yumiko gets to go home. The end.

Oh, but wait, there's another chapter! This one goes back into the past, and we learn the origins of the snake lady, or something. There was this guy who got attacked by a snake monster in a swamp, and he shot it but died of fright: 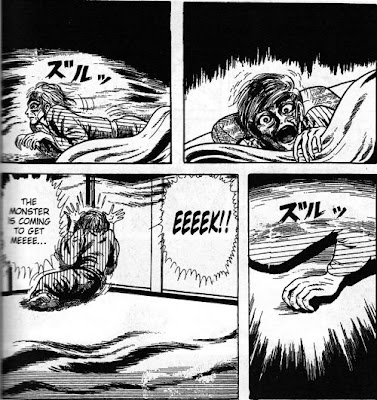 Years later, his granddaughter Yoko's parents are killed by a familiar reptilian female, and then she gets adopted by this weird rich woman. As you might guess, it turns out the woman is a snake lady, and she's been cursed by the snake monster in the swamp and is carrying out its revenge on the family of the hunter that shot her. So she menaces Yoko for a while, doing the old "stand there and threaten to kill her" routine, before finally cursing her as well and turning her into a snake lady. Then Yoko goes and threatens her friends for a bit before everybody goes and has a final showdown at the swamp. And does one of the characters end up in a room in the hospital, destined to become the snake lady of the first two chapters? I'll leave that one up in the air, but I wouldn't hold your breath.

So it's all pretty damn weird, and really doesn't make a whole lot of sense. It's not all that scary, but Umezu does a pretty good job of establishing a creepy mood, and seeing kids wide-eyed with horror never gets old: 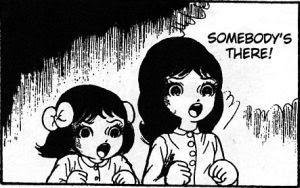 He also does some stuff that's just genuinely weird and freaky, like the way the snake lady slithers along the ground: 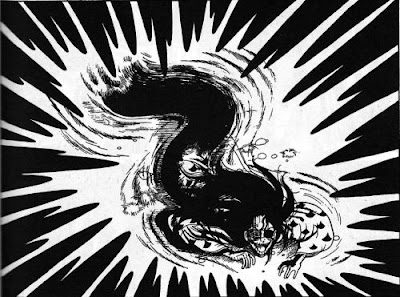 Or this inexplicable little bit: 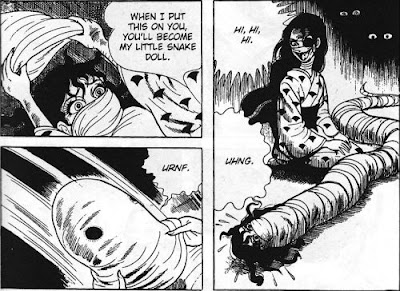 By this point, I was just left shrugging my shoulders and saying "what the hell, why not?" You just gotta go with it and sacrifice any understanding, I guess. Then you can just admire the art and not worry whether it makes any sense. You still get some cool panels like this one: 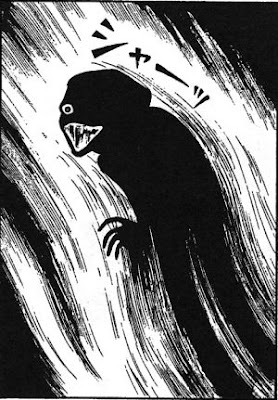 So overall, it's enjoyable enough if you sacrifice any sense of understanding and just marvel at Umezu's batshit insanity. It's definitely worth reading for Umezu fans, but I don't know what anybody else will make of it. Read at your own risk.
Posted by Unknown at 8:46 PM