Flink: Bigfoots are people too

Still working on getting caught up here, but as always, I'll remind you to enter my contest. Help with the site design! And win a comic! Yay! 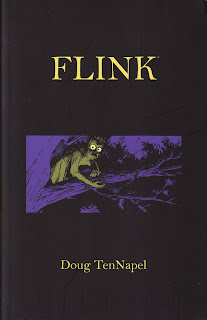 Doug TenNapel has father issues. Or at least, he's interested in writing about fathers and sons, since those relationships are the theme of this book. Sure, it's ostensibly about wilderness survival and Sasquatches, but the father/son thing is sitting there informing the entire book. It makes for interesting reading, and while I can wonder about TenNapel's reasons for writing it, it's still an entertaining, action-filled romp with heart.

Conrad is a young boy who gets dragged along with his dad on a bigfoot hunt in a remote Washington forest, one of his father's favorite activities. But Conrad isn't really interested; he would rather play his Game Boy. He ends up having bigger things to worry about than boredom when their plane crashes and he is left alone to fend for himself in the wilderness. He ends up meeting a bigfoot named Flink, who saves him from a rabid bear and helps him survive in the harsh environment.

It's a rousing adventure, with some excellent art; I really like TenNapel's rough and scratchy, yet still cartoony style: 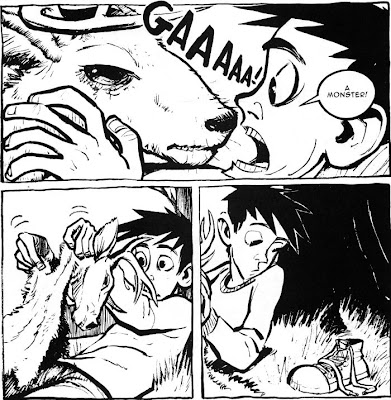 His action scenes are dynamic and exciting, and the character art is evocative and emotional; it's hard not to feel for poor Conrad when he worries that his dad is dead: 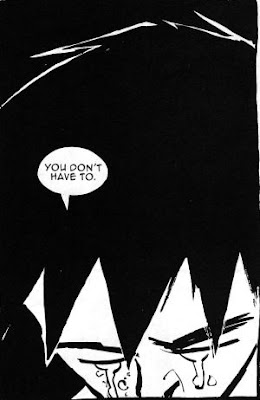 And the bigfoot designs are fun and goofy, with large, furry bodies and small, somewhat misshapen heads: 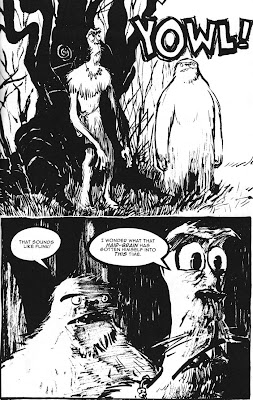 But the best part, in my opinion, is the characters and their relationships. Flink seems to be trying to make a connection with Conrad, since, as we see in a prologue, his son was kidnapped by humans years ago. And Conrad is guilty that he didn't really want to come on the trip, and now his dad might be dead. We also see some interesting inter-Sasquatch relationships, with Flink being something of an outcast because of his curiosity about humans. There's also some interesting details about bigfoot society, including their magical healing/plant-growing abilities.

And the action! It's a very exciting story, with the plane crash and the bear fights. Flink and Conrad's final showdown with the bear (which is a pretty scary beast, thanks to TenNapel's gross, slobbery artwork) is quite gripping, and the reader is really left wondering if they'll survive. Good stuff.

One word about the ending: I won't spoil it, but I'll say that it ends up being about as happy as possible. Me, I like a bit of tragedy in my books, so I was somewhat disappointed, but it works for the most part, and it fits the all-ages nature of the story. The book also seems to be over pretty quickly, but from the various TenNapel comics I've read, that seems to be his style; he goes at a breakneck speed, never letting up the pace until the story is over. That can make the story seem to go by too quickly, but it's also an effective way to make it exciting. Your mileage may vary.

So, overall it's a pretty nice book. While it's billed as all-ages, it might be a bit scary for younger readers, but older kids (maybe later elementary school students?) would probably like it. I'll give it the thumbs-up; really, there's nothing not to like.
Posted by Unknown at 9:32 PM