Hey, I'm actually back with some real content! This is a book I've been trying to get to for a few days, so it's good to finally talk about it. Now I'll have to sound like I'm being coherent. But first, I've got a review of The End League #1 up as part of the Sunday Slugfest over at Silver Bullet Comics. Okay, on with the show: 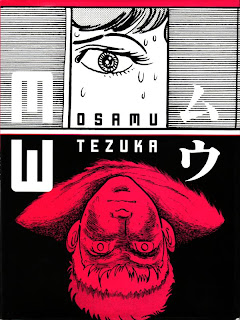 I'm loving the adult-oriented manga that Vertical publishes, and I'm very, very happy to get my hands on anything available by Osamu Tezuka, so reading this book was a treat. It's probably not one of Tezuka's best works, but it still has his crazy energy and batshit insane weirdness on every page. I mean, where else are you going to find a 70s-era manga about a gay Catholic priest, a serial killer, and a plot to destroy the world?

So here's the story: Father Garai was once a young hoodlum, and his gang of hippie thugs were causing trouble on a little island when they kidnapped a young boy. But there was a leak of chemical weapon gas called MW from the military base on the island, and it killed the entire population. Garai and the boy, Yuki, survived, and Garai felt so guilty he entered the priesthood. But the gas affected Yuki's mind, so he grew up to become an amoral, maniacal killer. Oh, and he and Garai are also lovers. That's the backstory; most of the book is actually about Yuki's murderous activities and Garai's attempts to stop him. He's pretty ineffective though, since he has some sort of priestly code that won't allow him to go to the police (maybe he secretly doesn't want to rat out his lover), so he mostly ends up yelling at Yuki before breaking down and having sex with him.

Meanwhile, Yuki is a despicable nutjob, gleefully going about raping women, extorting money, cross-dressing whenever he gets the chance, seducing Garai's old flame, and just wreaking havoc all over the place. He eventually develops a plan to steal the remaining MW from the army and wipe out the entire population of earth, just for kicks. Tezuka seems to really be going all out with this character, coming up with every psychotic activity he can think of so he can show it to us. There's rape and murder involving drugs: 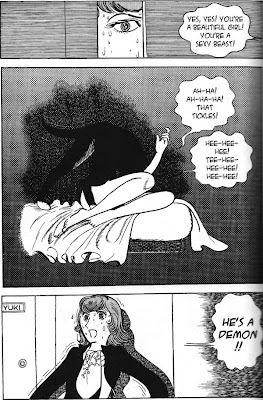 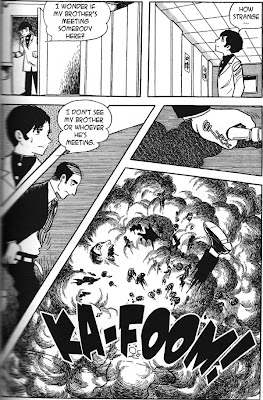 And all manner of other despicable activities. Not to mention the homosexual content, which must have been quite edgy in 70s Japan: 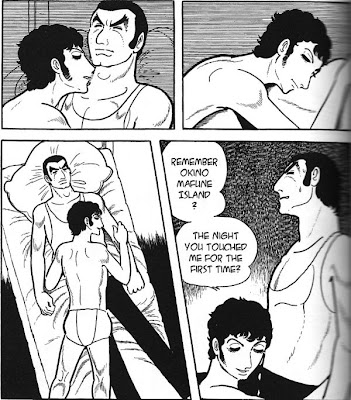 It's a hell of a ride; you never know what Tezuka is going to throw at you next. Maybe he'll have Astro Boy's Mr. Mustachio show up to get bodily mangled by Yuki's attack dog:

That's actually a really exciting sequence, by the way. Tezuka could really lay out a dynamic chase; I love the way he intercuts between the faces of the pursuer and pursuee: 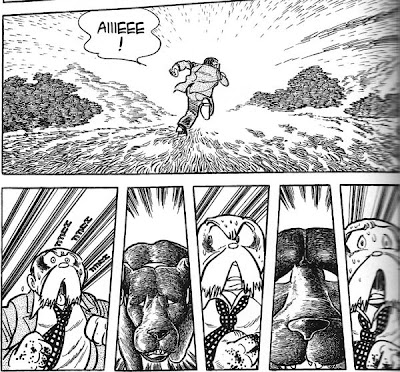 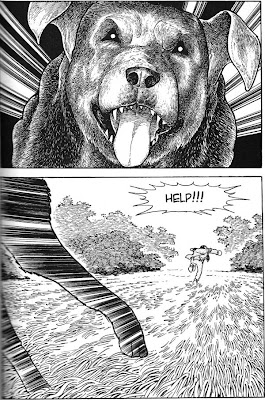 And the dog looks like a vicious, dead-eyed brute, far removed from the cute beasties of Buddha.

Tezuka throws plenty of other visual tricks our way. At one point, he depicts a conversation/sex scene between Yuki and Garai as images from classical art: 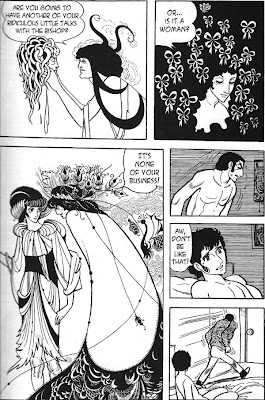 I'm not sure what the purpose of that was, although I suspect that he was trying to indicate that Garai is also going crazy. Or maybe he got bored and felt like drawing something different. And then there's stuff like the use of circular panels for a flashback: 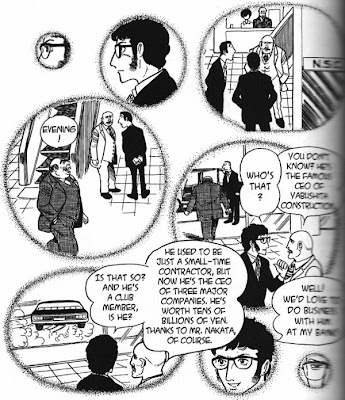 I love the way the panels work as a transition, like a "circle wipe" in a movie fading in and out on a scene.

As you can probably tell, I'm not trying to analyze the plot too deeply or anything, because I didn't get much out of it outside of a crazy story. I could talk about the role of women here, and that they don't seem to have much purpose in the story except as victims. One of them even gets raped and then falls in love with her attacker; I always hate when that old plot gets trotted out. And there's also an interesting discussion of the use of weapons for indiscriminate killing, such as one that certainly had an effect on the nation of Japan: 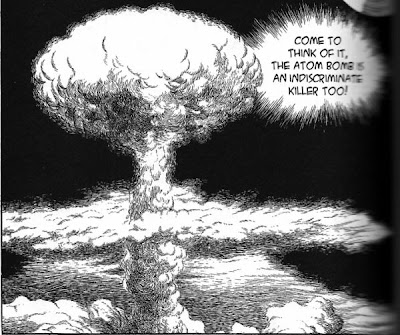 Tezuka might be trying to make a point about the effect the atom bomb had on Japan; they could have sworn revenge like Yuki, but they actually became more peaceful and turned their energy toward building their country. But that would probably be reaching. Really, the point of this book seems to be as transgressive as possible, with Tezuka exorcising his darkest impulses. For that end, it works magnificently. Not every book has to be a literary masterpiece; some of them can just be a nutty, murderous romp. I'll take Tezuka's brand of madness over the bland superheroics of mainstream American comics any day.
-----

I dunno, that might have been kind of half-assed, but hopefully I'll have some more stuff up in the next few days. I could still get around to those single-issue reviews I promised a while back...
Posted by Unknown at 9:36 PM