Art What I Like: One Piece Is Awesome, Example #19

By the 25th volume of Eiichiro Oda's One Piece, the characters have become strong enough that we don't need to see big proclamations of strength and the will to defeat their enemies. We've seen Luffy and company defeat some pretty major villains already, so they don't need to make a big deal every time they're challenged. In fact, they can demonstrate their strength and resolve by not fighting, as in a scene in this volume when an upstart pirate named Bellamy mocks Luffy and Zolo for having dreams and repeatedly attacks them, but they don't give him the satisfaction of fighting back. But later, after Bellamy steals something from a friend of Luffy's, Luffy goes to confront him and his gang alone and retrieve what was taken. In this scene, Bellamy (who has the power to turn his limbs into springs) continues to mock Luffy, who responds almost casually with a complete and utter beatdown: 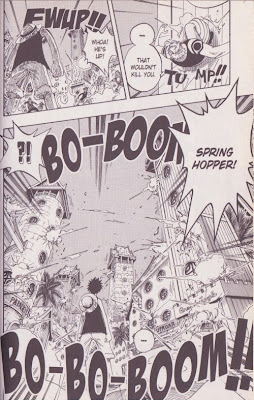 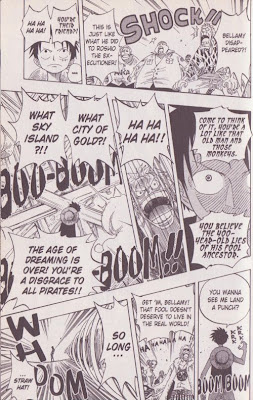 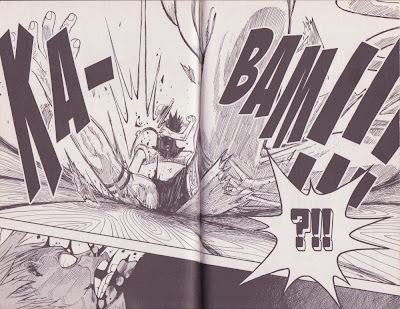 There are plenty of high-stakes battles in this series, but I like that Oda includes more minor confrontations of the sort that would naturally occur as the Straw Hat Pirates become more notorious, and while he's sure to continue introducing greater threats and larger-scale conflicts, he's able to demonstrate their awesomeness in less grandiose ways as well. And when he does this while still including moments of action that explode off the page, that's all the better.
Posted by Unknown at 6:00 PM