Attending a Lucy Knisley reading is something to Relish

Last night, I attended a reading of Lucy Knisley's book Relish (a book which I loved) at Chicago's Women and Children First bookstore, and bad puns aside, it's an experience I highly recommend. It's a great value-added experience for readers of the book (or anyone interested in checking it out). Knisley read the first chapter while displaying the comics images as a slideshow, but it wasn't just a dry recitation of the book's text; instead, she would read the descriptive captions, while allowing viewers to take in the art and any on-panel text or word balloons, making for an excellent experience that captured the feel of reading a comic. 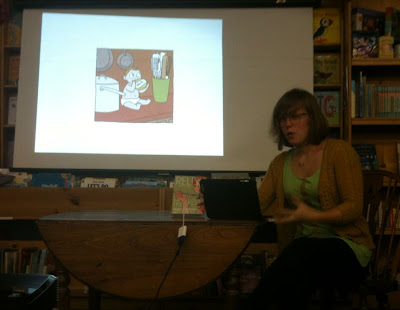 She also regularly added asides with additional information about her memories of what was being mentioned in the comic, and interspersed family photos (amusingly, she noted that her family has more pictures of food than of people) among the comics images to provide real-life examples of the imagery in the book. 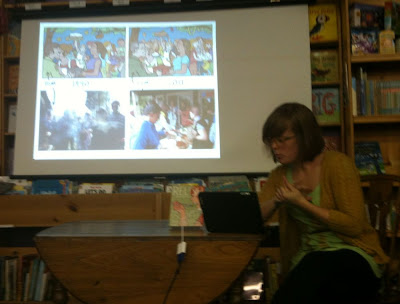 After the reading, Knisley discussed the making of the book, starting with her inspirations, which include Images a La Carte by Claes Oldenburg and Coosje Van Bruggen, Toast by Nigel Slater, and The Sweet Life in Paris by David Liebovitz. People had really responded to the recipe comics which she posted online and to the depictions and discussions of food in her first book, French Milk, and these influences and reactions came together in the idea of a memoir based around food, with comics-format recipes included.

One interesting story she told involved a meeting with James Kochalka, who spent over a decade producing his daily diary strip, American Elf. For whatever reason, he didn't respond well to her comics about food and eating, saying that he never did comics about what he had eaten. This bothered her, but she decided she didn't care and kept on doing what she liked, and she noted triumphantly that since then, Kochalka had reversed his stance and done a few strips about food. 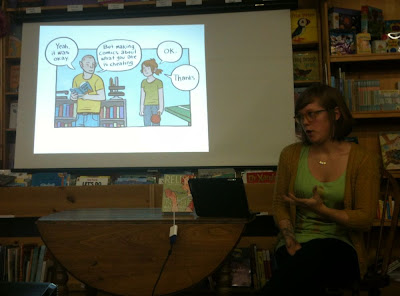 Knisley also described the creation of the book, which ended up taking three years to complete. She detailed the process of writing the script and producing thumbnails, then penciling, inking, and coloring. One especially notable detail, which she says is crazy and doesn't recommend, is that she printed out the text for each page in reverse, then used a lightbox to hand-letter it all on the actual artwork pages, in order to ensure that the text maintained the warmth of handwriting rather than the cool distance of a font. 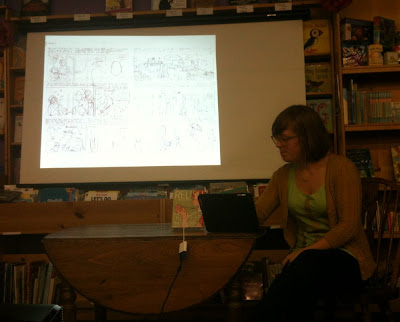 Following the presentation, Knisley took questions from the audience, which led to some interesting discussion of her attitudes toward food, comics, and travel, and some hints at what lies in her future (she's been doing comics about traveling and food, including trips to Tanzania and Korea, and her next book is in the planning/acquisitions stages). When asked if she had any foods that she didn't like as a kid that she eventually came around on, she said that she had really disliked lobster, and seafood in general, and even though her parents occasionally tried to sneak some into her food, she was always wise to them and refused to eat it (she has come around on it as an adult though). One person noted that Knisley seems to focus on French cuisine, and asked if there were any other cooking styles that she would like to learn more about, and  she replied that she would love to travel to India and learn more about Indian food. When somebody asked about her use of color, she said that she felt it, along with texture, is very important when depicting food, since drawings of food function as symbols rather than actual representations like photos, and they need to be appealing, something for which color is essential.

A question about any exotic foods which she was unable to bring herself to eat led to a great anecdote about Knisley being given the opportunity to eat live octopus on her trip to Korea. She considered it, but couldn't bring herself to actually eat it, especially since one has to fully chew up the creature and ensure that it is dead before swallowing, or else the tentacles will cause the person to asphyxiate (this ends up causing several deaths each year in Korea). I asked her if Erika Moen, a cartoonist friend of Knisley's who is a noted octopus enthusiast, would ever forgive her if she had gone through with it, and she said that she actually called Erika to ask her what she thought, and Erika urged her to eat the octopus, and was probably quite disappointed when she wasn't able to do so.

Following the Q&A, Knisley signed people's copies of Relish, and she drew a sketch of their favorite food on the title page. Here's mine; yup, I love me some lobster: 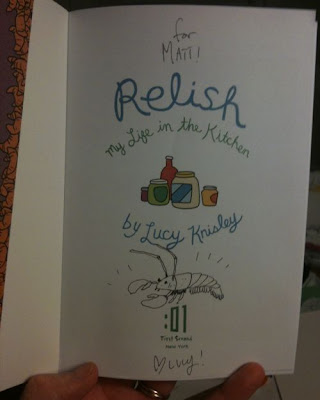 I highly recommend attending one of these readings given the chance. Here's the schedule for the remainder of Knisley's book tour. If you see her, say hi for me!
Posted by Unknown at 12:00 PM