The Neverending Fray: Reading is fundamental 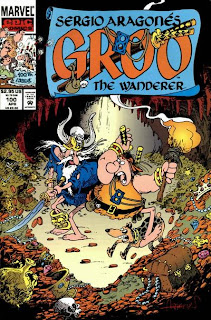 Most mainstream comics exist in a state of stasis, with each issue beginning and ending in the same basic place, the status of the characters rarely changing from story to story. This is especially true for humor comics, and Groo is no exception, with each new story seeing him wandering into a new locale and getting up to his usual hijinx. So when a real change occurs, it's pretty notable; up until this landmark issue, the only real shake-up to the status quo was the addition of Rufferto as Groo's faithful companion. But after over 100 issues, the Groo Crew must have been itching to tweak their formula, if only slightly, so they do so here by altering one of the fundamental truths of the series, that being that the main character is very, very stupid. He's so dumb that any increase in his intelligence makes a pretty big difference, and the change that he goes through here by learning to read ends up being kind of fascinating, a real development of his character. It's a bold step, one that the creative team certainly didn't take lightly.

The story builds organically to the big event, giving Groo some motivation to increase his intelligence by having him get frustrated with his illiteracy. He has rarely been bothered by his lack of intelligence in the past, but his constant confusion is starting to get to him: 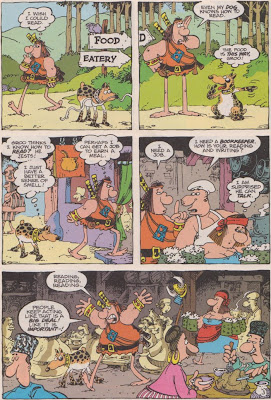 His worries are alleviated somewhat when he gets recruited into an army of fellow dimwits who are sent on a suicide mission as a ploy by a general to take over a kingdom that supposedly is hiding a vast treasure. But we learn that the king doesn't know where the treasure is either, and wouldn't you know it, Groo just happens to stumble across its hiding place: 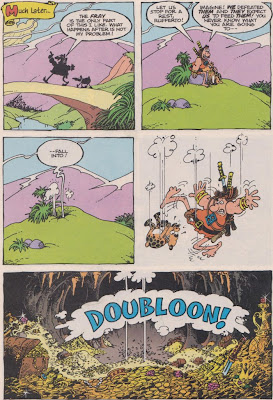 Unfortunately, there is no way out of the cavern hiding the treasure, and Groo is stuck there, along with its decrepit guard, a fellow named Abecedario. With no place to go, the old man decides to take on the monumental task of teaching Groo to read, which gives us some enjoyable gags: 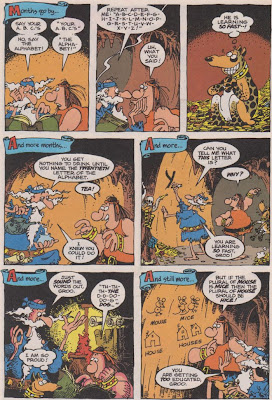 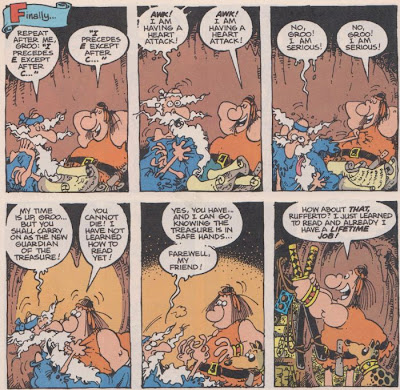 Groo can't stay trapped in the cavern forever, so following the old man's death, he actually figures out how to get out (he's gotten smarter already!), but once he's free, it seems his priorities have changed somewhat: 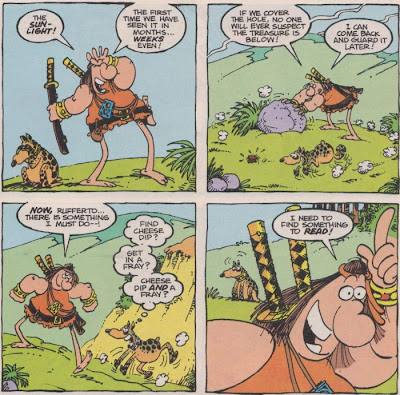 When he comes across a library in a nearby town, it's like a whole new world has suddenly become available to him, and much to Rufferto's chagrin, he seems less interested in his typical passions:

This contentedness cannot last, of course, or else there wouldn't be much of a comic, so events soon transpire to destroy Groo's life of tranquility. Various characters, including the aforementioned king, Taranto, and Pal and Drumm, show up looking for the hidden treasure, and they turn the town upside down. Groo's first impulse is to attack, but the librarians convince him that violence doesn't solve anything, so he tries to reason with them, to no avail. And then the real tragedy strikes, when looters set fire to the library, and when nobody is willing to help put it out, Groo has to resort to what he does best: 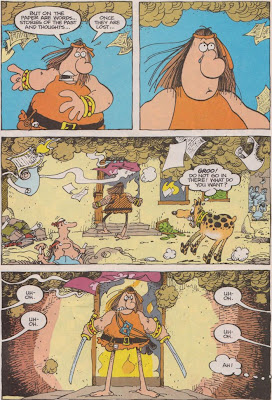 It's a powerful moment, a collision of Groo's new ideals with his old way of life, and watching him beat down those too ignorant to appreciate the treasure that is knowledge is both cathartic and sad, providing a realization that Groo will never be able to leave behind his life of violence (not that we would ever want him to). The issue ends with him deciding to make his way to a new land where he can belong, away from those who would judge him based on his reputation for stupidity. We'll have to see how that works out.

This issue ends up being an odd one, a bit more serious than the comic usually is, but that seems necessary when making such a big change to Groo's life. As much as he had previously seemed to enjoy his life of vagrancy and adventure, there was obviously something missing, a struggle for respect, or at least not to be hated by everyone he encountered. Is he actually going to be intelligent now? From what I recall, he does seem to have gained some minimal smarts, but he still gets up to his usual activities, jumping into frays with no warning and getting caught up in the schemes of those seeking power and wealth. It ends up being a fairly small tweak to the status quo, but one that has a lasting impact, and maybe even makes Groo a bit more sympathetic. We'll see how it goes, but I'm excited to rediscover what the Groo Crew did as they struck out into bold new territory. As always, I'm happy to be going along for the ride.


Next: "A New Land"
-----
This issue's stats:
Recurring characters: Just about everyone. Taranto and Pal and Drumm appear in the main story (along with Minstrel, Sage, Arba and Dakarba, Arcadio, Grooella, Chakaal, and Ahax in Groo's imagination), and see some of the images below for appearances by anyone and everyone else.
Moral: No moral, surprisingly.

Spanish words: Abecedario means "alphabet". A book in the library is called "Brujeria", which means "witchcraft". General Maton is named after the word for "bully".
Hidden message: I knew they wouldn't be able to resist putting one in the big anniversary issue. It can be seen on the spines of some of the books in this panel, reading "A hidden message in this issue? That is absurd!": 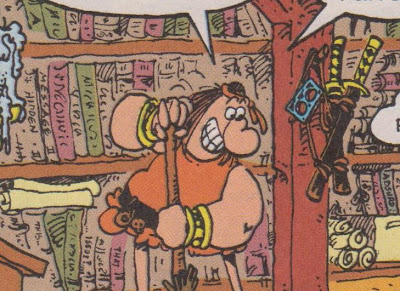 Running jokes: Groo gets called a mendicant. Groo surprises Rufferto by seeking out something to read instead of cheese dip or a fray. Drumm asks Pal to buy him a house. Somebody asks if Groo is slow of mind, and he surprisingly answers in the affirmative, and never gets around to questioning what they meant, at least not in this issue.
Intro follies: The intro page features a big gala for the landmark 100th issue, with cameos from a bunch of Groo characters, friends of the Groo Crew (I'd love to see some annotations of who's who; I'm sure there are lots of famous cartoonists in there), and even the back of Alfred E. Neuman's head: 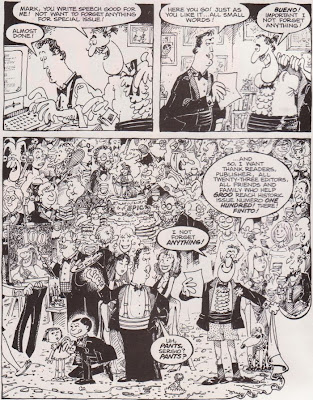 Value-added: This issue's puzzle page is a cool ladder maze: 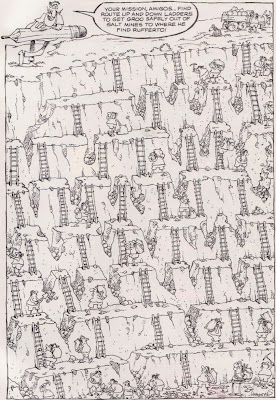 Also, in lieu of a back-cover Rufferto strip, this issue has an image packed with just about every notable supporting character from throughout the entire series, including Al Jaffee, Groo's wife, Groo's parents, Groo's "girlfriend", and even Lat: 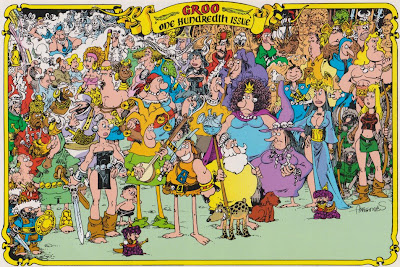 Mark Evanier's job(s): Funambulist ("tightrope walker")
Letter column jokes: Mark gets some anniversary thanks to the comic's readers, editors, and creative team out of the way, then he moves on to print a letter from the infamous M. Wayne Williams, who had previously said he could only afford to buy every other issue of Groo, inspiring Mark to print his letter in every issue. He promises to buy every issue from now on, which makes Mark happy that he can stop printing his previous letter. I seem to have missed a running joke involving Brent Anderson in the last few issues; apparently Mark asked people who know who he is to write in? Kevin Cunningham provides the example for this issue, mentioning a miniseries called The Spacing Dutchman which was supposedly going to be published by DC (from what I can tell, it was eventually published by Slave Labor as part of a series called Spin World; note the name of the letterer). Mark Whiteford provides a creepy description of his duct tape fetish, and Mark says he feels the same way about his Wham-o Slip n' Slide. Chert Pellett writes in with a Grooism, telling of the time his dad was about to cut down a tree for a customer at the family Christmas tree farm, and the person stopped him to ask if the tree was fresh. He also notes that he typed "Sergio" into his spell-checker, and it suggested "sage" as a replacement. Mark says he tried the same thing, and his spell-checker suggested "Antonio Prohias". Adam Hodgin notes that he had a letter printed in issue #89 that said what "[Mark] did at the party last night was inexcusable," but wonders if a similar letter from David Schuster in issue #95 was an homage. Mark says no, he just behaves very badly at parties. In other news, Mark notes that Sergio guest-starred on an episode of the TV show Bob, along with Jack Kirby, Bob Kane, Marc Silvestri, Jim Lee, and other comics luminaries.