Art What I Like: One Piece Is Awesome, Example #20

I love the crazy concepts that Eiichiro Oda comes up with in One Piece; he's s non-stop fount of imagination and creativity, throwing so much wild and wacky stuff onto the page that there's probably at least one cool new idea in each chapter, whether it's the regular introduction of characters with new and strange abilities and weapons, pseudo-scientific explanations for said powers and technologies, new ways for characters to use their abilities to fight, bizarre costumes and antics, well-realized cultures, or hilarious jokes. The Skypeia storyline is a bonanza for all of these aspects, with the characters exploring a land that floats on solid clouds and encountering people who use a technology based on shells that can absorb different kinds of energy and then release it on demand. Here's a bit that I like from volume 26, in which the Straw Hats end up in conflict with the local authorities: 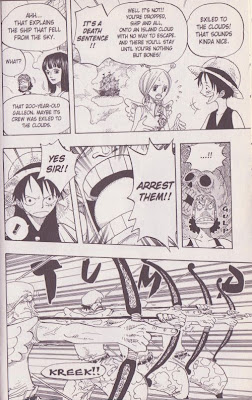 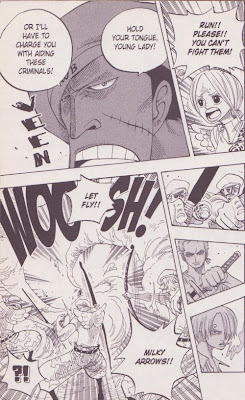 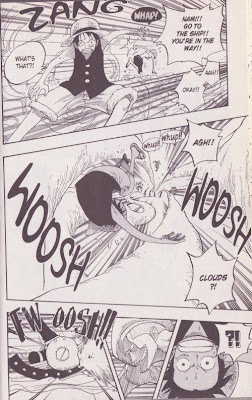 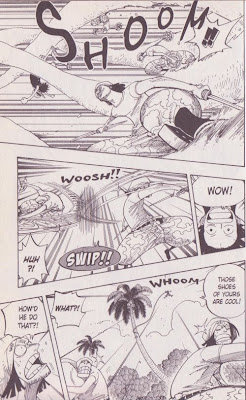 It might not be obvious out of context, but what's happening there is that the "cops" shoot arrows that leave a trail of solid clouds behind them, then, using the rocket skates that they use to travel across the clouds, fly down the trails and attack. That's just cool. Of course, the fight doesn't last long, because this is just a brief skirmish that kicks off the conflict that lasts for the next several volumes, but it works great as a quick moment that demonstrates what people in this land are capable of. I love the way Oda just tosses out this sort of thing; he definitely never lets the fighting get boring, and there's always some new idea around the corner. It's downright addictive; I can never wait to see what's going to happen next. On to the next chapter!
Posted by Unknown at 6:00 PM