Art What I Like: One Piece Is Awesome, Example #35

In One Piece, Eiichiro Oda seems to always be walking a tightrope, somehow maintaining a balance between awesome action, silly humor, over-the-top characters and concepts, and heartfelt emotion, but he never falters, somehow always nailing the tone, selling threats and fights with massive stakes but still being goofy whenever the opportunity arises. I especially like this bit of humor in volume 38, in which Luffy ignores various characters' warnings of the danger of rushing in to rescue a captured comrade, leading to a hilariously massive plop take: 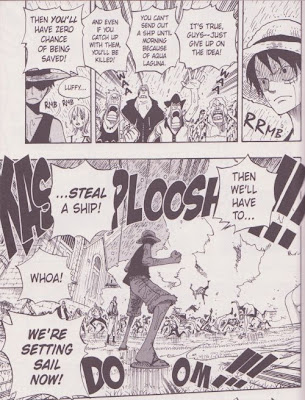 It's not exactly a traditional plop take, in which one or more characters react to something someone says by collapsing off the panel, with only their feet visible, as if the sheer unbelievability of the statement has caused them to faint, but it functions along the same lines, and the sheer number of guys freaking out about what Luffy said is hilarious, with some of them falling to their knees, collapsing  in disbelief, or even throwing themselves into the air. I love the way Oda can give us a dramatic moment like this, in which Luffy displays determination in the face of terrible danger, and undercut it with something that makes the reader laugh out loud. How he walks this fine line without error is beyond me, but I love to see him do it.
Posted by Unknown at 6:00 PM